Keith Laybourn traces the emergence of the Labour Party, its highs and lows and wonders if its forward march is now halted. 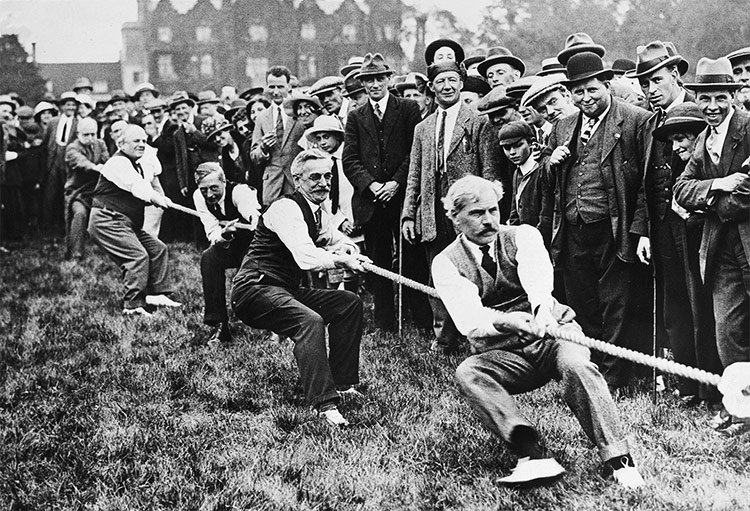 Ever since the Labour Party was formed as the Labour Representation Committee in 1900 it has been at the centre of intellectual and political debate. Writings on the Labour Party have been driven by two central questions: first, why did the Labour Party emerge in the early 20th century to replace the Liberal Party as the progressive party in British politics? Second, has the forward march of Labour been halted? The second of these has particular relevance since the recent election of Jeremy Corbyn as Labour’s leader, which  has rekindled divisive conflicts between Old and New Labour.

As the Labour Party emerged to replace the Liberal Party in the 1920s, G.D.H. Cole suggested that its success was the inevitable consequence of the emergence of class politics. This was espoused in George Dangerfield’s amorphous study The Strange Death of Liberal England (1934) and by Henry Pelling’s more factually based The Origins of the Labour Party (1954). Their view was rejected by Trevor Wilson’s book, The Decline of the Liberal Party (1966), which proposed that Labour’s growth had less to do with working-class enfranchisement than with the impact of the First World War, when the Liberal Party found itself divided between the contrasting premierships and values of Henry Asquith and David Lloyd George. In the 1970s, there was intense debate between the rival interpretations of class politics and the First World War, fuelled by P.F. Clarke’s Lancashire and the New Liberalism (1971), which argued that the Liberal Party was in rude health on the eve of war, buoyed up by Lloyd George’s New Liberal policies and the Liberal reforms of 1905-14, which encouraged social harmony and largely retained the working-class male voter.

This view was countered by Ross McKibbin in his The Evolution of the Labour Party 1910-1924 (1974) and in my own book, The Rise of Labour (1988), arguing that the trade union base of Labour, when faced with industrial conflict, was more interested in winning support than establishing social harmony during strikes. Since then, the debate has widened to incorporate the views of David Howell, Bill Lancaster and Duncan Tanner, all of whom have raised the issues of regional and local variations in the growth of Labour and suggested that its success was not inevitable.

Labour’s victories since 1900 have been fitful. Two minority governments in 1924 and 1929-31, under Ramsay MacDonald, brought barely the most modest of social and political changes and much venom from those who considered him a traitor. However, David Marquand’s biography, Ramsay MacDonald (1977), represented him as an honest socialist driven by his commitment to the 19th-century values of statesmanship and national responsibility in the face of the horrific economic crisis that emerged after the Wall Street Crash of 1929. The complexity and permeability of Labour politics at this time has been developed further by John Shepherd’s monumental biography of George Lansbury (2002) and by David Howell’s commanding MacDonald’s Party: Labour Identities and Crisis 1922-1931 (2002), which examines Labour politics as it varyingly operated in the Independent Labour Party, the trade unions and other sections of Labour. This multi-layered reappraisal of Labour politics is also particularly evident in Britain’s Second Labour Government (2011) edited by John Shepherd, Jonathan Davies and Chris Wrigley. Through these works we have begun to understand the immense difficulties of minority Labour governments that were fractured by disagreement, overwhelming economic difficulties and unemployment costs.

Labour achieved success with the Clem Attlee governments of 1945 to 1951, creating the modern welfare state and the National Health Service; further success in the Harold Wilson and James Callaghan era of 1964 to 1970 and 1974 to 1979 and once again under Tony Blair and Gordon Brown between 1997 and 2010.

However, the nature of British politics has changed and, apart from the recent erosion of the welfare state and the NHS, there has been a retreat by Labour from the commitment to the Old Labour policies of public ownership to the embracing of capitalism within a wider framework, which increasingly eschews public control and is represented by New Labour. This may have been driven by Labour’s lengthy periods in opposition between 1951 and 1964, 1979 and 1997 and since 2010. In these wilderness years there were a flurry of books and articles published on the theme of ‘Must Labour Lose?’ and ‘The Future of Labour’, following Eric Hobsbawm’s Marxism Today article ‘The Forward March of Labour Halted’ (1978). One dominating theme has been the declining role of the trade unions, whose control of the Labour Party, as secured by the 1918 Constitution, was eroded in the 1980s to a third of the vote in the leadership election to one that was indirectly successful in the election of Jeremy Corbyn as leader in 2015. The broader reaction against trade union domination has been captured in the extensive writings of Chris Wrigley and John Shepherd in Crisis? What Crisis?: The Callaghan Government and the British ‘Winter of Discontent’ (2013), which deals with the industrial conflict of 1978-9 that saw uncollected rubbish accumulate in the streets and corpses unburied as roughly one and a half million workers went on strike. It still resonates in British politics and public rhetoric.

As class politics appears to be less relevant in British society now – with the structural decline of the large industries and their blue-collar workers along with the waning of trade union power  – we have recently been reminded in Martin Pugh’s iconoclastic Speak for Britain: A New History of the Labour Party (2010) that Labour never truly became the party of the working class; it skilfully adapted its message to the established local and regional cultures of the Liberal and Tory traditions and became emasculated by Blair. Pugh’s suggestion that Labour has a tendency to choose the wrong leader and to hang on to him too long is an interesting reflection in the light of the result of Labour’s recent leadership election.

Only time will tell whether or not this means that Labour’s forward march has been halted.

Keith Laybourn is the Diamond Jubilee Professor of History at the University of Huddersfield.