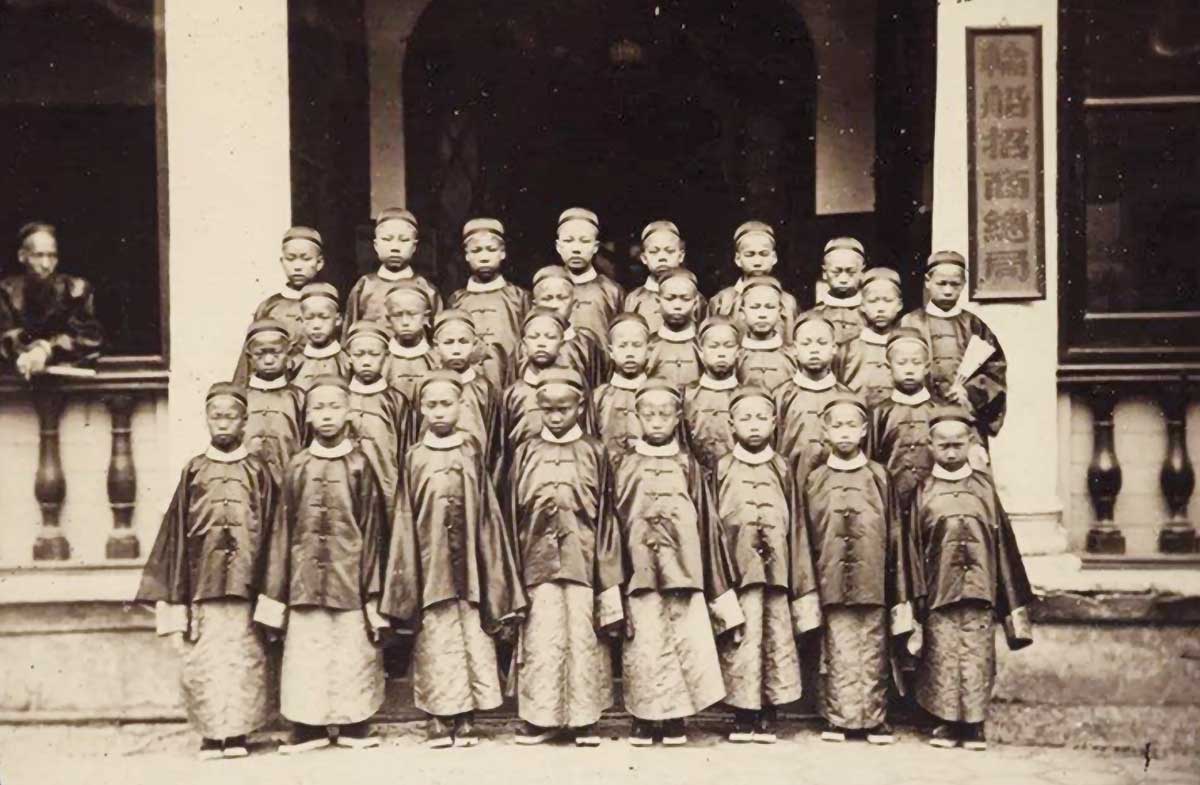 On 11 August 1872 China’s first batch of government-sponsored overseas students set out from Shanghai. Crossing North America by train, they arrived in New England to start their life of study abroad. According to the memoirs written in 1922 by one of the students, Lee Yan Phou, they looked forward to the experience, but were fraught with anxiety at the same time.

With an average age of 12, this group of young male students, robed and with long braids, was the first in Chinese history to study abroad. They had only ever spoken Mandarin and had received a traditional Chinese education. Although they had known next to nothing about English-speaking countries before, once they arrived in the United States they overcame the language barrier and adapted to the norms of western education. They went on to prestigious universities, such as Yale, Harvard and the Massacusetts Institute of Technology. As well as studying hard, they played an active role in a wide range of sporting activities and were often to be found on the basketball court, football field and baseball square. One of these students, Mun Yew Chung, served as the coxswain of the Yale University rowing crew which defeated Harvard for two consecutive years, in 1880 and 1881.

Having long pursued a policy of avoiding contact with other countries, the Qing government of the 19th century knew almost nothing about the western world. When the Opium War broke out between China and Britain in 1840, the government did not even know the exact geographical location of its enemy’s island home. Emperor Daoguang reportedly asked ministers about the direction to Britain, wanting to know whether it bordered with Russia: the Chinese thought that British and Russian people looked very similar and it therefore seemed likely.

As major world powers increased contact, China inevitably became dragged into international affairs. Its government urgently needed to develop a proficiency in foreign languages to understand foreign situations and to master the scientific knowledge and technologies of those countries. At the end of September 1871, therefore, the Qing government made a detailed plan to select young men as educational mission students and send them to the US. Under the impetus of Yung Wing, the first Chinese student to graduate from an American university (Yale, in 1854), the first official foreign student programme in Chinese history was launched. In total 120 students were sent to the US in four batches between 1872 and 1875, planning to return to China after 15 years of study.

However, after these students had studied in the US for eight or nine years, the Qing government prematurely and abruptly terminated the programme, largely due to concerns over how well accepted and integrated into American life the students had become. Yung Wing wrote in his autobiography My Life in China and America (1909) that some students had cut off the braids that symbolised their loyalty to China; some had adopted Christianity and proposed the idea of ‘Christianising the Chinese Empire’; others had begun to criticise traditional Chinese culture and Confucianism. None of these changes could ever be tolerated by the government and in 1881 the students were forced to suspend their studies and return home.

Despite their education being cut short, after their return they became pioneers in China’s mining, railway and telegraph industries, largely due to the knowledge they had gained in the US. Notable representatives include Jeme Tien Yow, who independently designed and presided over the construction of China’s first railway (the Beijing-Zhangjiakou Railway); Tsai Shou Kee, who founded and was president of Imperial Tientsin University (now Tianjin University); and Leung Dunyan, who served as foreign minister for the Qing government and was minister of transport for the Beiyang administration. Others set up schools, opened factories and built railways.

The western concepts, technologies and cultures these students brought back caused a sensation in closed China and made senior officials more aware that closing themselves to the outside world was a stumbling block to the country’s development. Only by actively studying the systems and technologies of other countries could China become stronger and learning from the West gradually became accepted.

In 1909, therefore, the Qing government relaunched the official programme of foreign study and the Ministry of Foreign Affairs also set up the Tourism Aesthetics Office, which specialised in sending students to the US. Between 1909 and 1911 a further 180 students were sent in three batches; among them were Mei Yiqi, Hu Shi, Zhao Yuanren and Zhu Kezhen, who went on to become prominent figures in Chinese politics, education, culture and academia.

After the founding of the Republic of China in 1912, the government programme of sending students abroad to study was established on a larger scale, with many more students taking part. Three training bases were also formed for students preparing to study abroad: Tsinghua University (in Beijing), Nanyang College (in Shanghai) and Henan Preparatory School for Further Study in Europe and America (now Henan University).

Today the process of reform and opening up has become accepted throughout Chinese society. The government of the People’s Republic of China still encourages young people to study abroad. According to statistics from China’s Ministry of Education, the total number of Chinese students studying in other countries reached almost six million in the 40 years from 1978 to 2018. In 2018, with 662,100 Chinese students enrolled outside their country, China became the largest source of overseas students in the world. Having received an international education, these students have brought considerable changes to Chinese society and linked China more closely with the rest of the world.