The Cheapest Bookstore in the World

How did bookselling develop from the preserve of the elite to the Amazon marketplace? It is due, in large part, to the actions of one man. 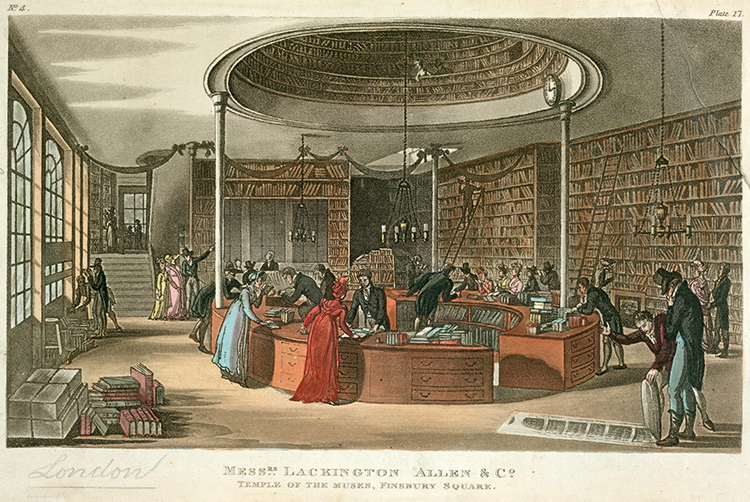 Writing in his Memoirs of the First Forty-Five Years of the Life of James Lackington (published in 1792), Lackington, who began his working life as an illiterate shoemaker’s apprentice, explained why he had undertaken to transform the book industry:

Thousands […] have been effectually prevented from purchasing (though anxious so to do) whose circumstances in life would not permit them to pay the full price, and thus were totally excluded from the advantage of improving their understandings, and enjoying a rational entertainment.

Although the 18th century saw the rise of the library – both of the public lending and commercial circulating varieties – as well as papers such as The Spectator and The Tatler (neither to be confused with their modern-day namesakes), the purchasing of books remained prohibitively expensive. Despite advancements since Johannes Gutenberg’s invention of the printing press in 1436, books were a commodity reserved for the elite. Given that only an estimated 60 per cent of the adult population were literate, this is not surprising. Yet, to Lackington, the system was broken and by 1793 he had radically altered it. Born on August 31st 1746, Lackington sold cakes in Somerset from the age of 10, while teaching himself to read. He claimed in his memoirs to have arrived in London in August 1773 with just two shillings and sixpence, yet ended his life as the proprietor of the biggest bookshop in London, having democratised the English book trade.

At the beginning of the 18th century most bookselling was done at auction (which would often also involve a full lunch). Booksellers would both publish and distribute books, negotiating the purchase of manuscripts before editing and printing them resembling, in effect, a modern publishing house. Hamstrung, too, by the widespread practice of accepting payment in credit, booksellers would discourage customers from lingering or browsing in their precious retail space. Book prices were kept artificially high. Booksellers would purchase large quantities of titles which were not selling well and then destroy up to three quarters of the stock in order to maintain a high market price.

Lackington wanted to create a system where more people had access to books. He achieved this by rejecting normal business practises. He opened his first shop in Chiswell Street, near the Barbican. Alongside books, he originally sold shoes and other items. Lackington eschewed the credit economy, insisting all customers pay in cash and, instead of destroying excess to keep a high market price for individual titles, Lackington would buy up entire libraries, and then sell all of the books as cheaply as possible, as he explained in his memoir:

I began by marking in every book the lowest price that I would take for it; which being much lower than the common market prices, I not only retained my former customers, but soon increased their number.

By 1793, a year after publishing his memoir, Lackington had amassed an inventory of books large enough to open a huge bookstore in the centre of London, the Temple of Muses. Located in Finsbury Square, it was said to have been large enough ‘that a mail coach and four horses were driven round the counters at its opening’. The shop front was 140 feet long, four storeys high and held a supposed 500,000 titles at its peak. It was an international success too, taking regular orders from America and supplying Scotland’s early library system. Above the entrance a plaque proclaimed the shop to be ‘The Cheapest Bookstore in the World’. The shop’s motto was ‘Small profits do great things’. To emphasise the low cost of his books, another sign stated: ‘The lowest price is marked on every book, and no abatement made on any article.’

It is difficult to gauge how different and shocking Lackington’s approach would have been to his contemporaries, but certainly his outright refusal to haggle or accept credit as a form of payment – two integral parts of 18th century retail trading – would have been insulting to his competitors and some of his customers. But his bargain prices won over the masses and the Temple of the Muses became a tourist attraction.

Lackington retired from the book trade in 1798, leaving the Temple of the Muses to his cousin George. The shop continued to be a success until it was destroyed by fire in 1841. Yet Lackington's pioneering approach to bookselling continues to reverberate. His welcoming attitude to guests, who were encouraged to linger and browse, resembles the approach taken by increasingly rare independent bookstores across the world. It was his approach to pricing, however, that would have the biggest consequences, reaching its logical conclusion in the large scale devaluing of the book as commodity by Amazon. Today we take cheap books for granted, but as the trade struggles to deal with the Amazon marketplace, perhaps a similarly revolutionary shift in paradigm is needed.

Robert Greer is a writer and bookseller based in Madrid.