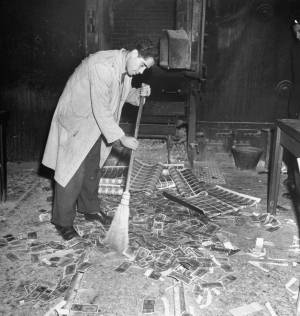 In 1929 the Harvard economist Charles Bullock published a magnificent essay on a monetary experiment conducted by Dionysius the Elder, ruler of the Greek city state of Syracuse from 407 BC until his death in 367. After running up vast debts to pay for his military campaigns, his lavish court and spectacles for the common people he found himself painfully short of ready cash. No one wanted to lend him any more money and taxes were drying up. So Dionysius came up with a great wheeze. On pain of death he forced his citizens to hand in all their cash. Once all the drachmas were collected he simply re-stamped each one drachma coin as two drachmas. Simple. Problem solved. Syracuse was rich again.

Except, of course, it wasn’t. Bullock used it as an early example of why just minting more money out of thin air was seldom a reliable way of creating more wealth. There was, however, another lesson to be learned. When it comes to making a mess of the economy and fiddling the figures the Greeks have been at the top of their game for a very, very long time.

As the rioters storm through Athens, as the beleaguered Prime Minister George Papandreou patches together a coalition government and as the French and German governments wrestle with the second bail-out for their wayward partner in the euro in a little over a year it is worth remembering that this is not just a financial story, but a historical one as well.

If Europe’s leaders had looked more closely at the country’s past they would probably have never allowed Greece to merge its currency with Germany and the other euro-zone members of the EU. Its credit record is truly awful. After the formation of the modern Greek state in 1829 the country went on to default on its debts in 1843, 1860 and 1893. According to calculations by the economists Carmen M. Reinhart and Kenneth S. Rogoff Greece has spent more time in default to its creditors than any other European country. It has been skipping its repayments for 50 per cent of the years since 1800, compared with a mere 39 per cent of the time for the next worst offender, Russia. Indeed, even if you moved it across to Latin America – generally regarded among bond traders as default central – it would still be among the worst offenders. Only Ecuador and Honduras have a worse record of meeting their debts.

One reason for this is that the Greeks simply don’t have much money. All of the southern European countries that are struggling to stay in the euro zone – Spain, Portugal and Italy as well as Greece – are relatively economically backward compared to their richer northern neighbours. In all of them poor quality Mediterranean soils prevented agricultural development and the emergence of the prosperous middle class that drove the Industrial Revolution in the rest of Europe. But Greece was the most extreme example. Cut off by the Carpathian mountains it was far removed from the mainstream of European science and culture. For much of the last millennium it was dominated by the Byzantine Empire – not much known for its industrial prowess. Even after independence it struggled to earn a living for itself.

While much of Mediterranean Europe modernised rapidly in the postwar years, Greece barely caught up. Occupation by the Nazis followed by a civil war didn’t help. During the late 1960s and early 1970s, when much of peripheral Europe was starting to industrialise for the first time, it was ruled by a buffoonish clique of colonels who resisted any form of modernity, either cultural or economic. In a number of ways Greece still remains a pre-industrial economy, dominated by the state, by cartels and by a handful of wealthy families. Few multinational companies have found it possible to do business there.

The interesting question is why anyone thought Greece could survive in a monetary union alongside countries such as Germany, Austria, Holland and France that have always been far richer?

In reality everyone was trying to escape their history. The Germans and the French committed themselves to the euro as the next stage in cementing the European Union together; the 1957 Treaty of Rome, the European Coal and Steel Community, Euratom, the EEC, the EC and the earlier monetary union have all been put forward as ways of cementing France and Germany (and others) together. The Germans, and particularly the Bundesbank, knew Greece should not join the euro. But it wasn’t really possible to tell countries they were not welcome in the single currency. It would fatally undermine the whole European project, an ideal to which an entire generation of politicians had committed themselves.

And the Greeks? Like the rest of the financial and political elite in southern Europe, they believed the euro would be a catalyst for modernisation. Replacing the drachma with a new currency would, they argued, be a transformative act which, in a single step, would turn Greece into a vibrant, free-market economy.

But in that respect, as in so many others, the euro was simply not up to the job. Dionysius couldn’t make Syracuse richer by re-stamping the coins. And the European Central Bank couldn’t change the course of a few hundred years of Greek history by enforcing a one size fits all monetary policy. That simple truth is now catching up with all of them.

Matthew Lynn is a columnist for the Wall Street Journal Market Watch and the author of Bust: Greece, The Euro and The Sovereign Debt Crisis (John Wiley, 2011).