The Great War was a Just War

It is time to ditch the Blackadder view of history, says Gary Sheffield. Britain was right to fight Imperial Germany in 1914. 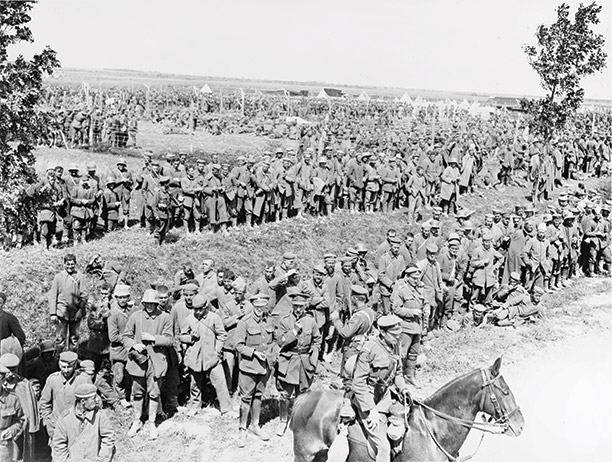 ‘At that point in Britain’s history, it was important that there was a war that ensured that Europe could continue to be a set of countries which were strong and which could be working together.’ Such was the view of Maria Miller, the culture secretary, on why the First World War was fought, given on BBC Radio 4’s flagship Today programme on June 10th, 2013. Her comments were greeted with a range of responses, in which mockery was to the fore. One of the more considered was that of the journalist Andy McSmith in the Independent: ‘Oh dear!’ McSmith exclaimed. Because the UK Government ‘wants to honour those who died in the conflict without making a judgment on why that war began’, he continued, Miller, who heads the department taking the lead on the centenary commemorations of the First World War, ‘had to improvise when asked what it was all about’.

McSmith’s insight is astute. It was the government’s ‘non-judgmental’ approach that led to the culture secretary’s moment of car-crash radio. She was responding to the journalist and historian Max Hastings, who had stated that most historians held Germany and Austria-Hungary primarily responsible for the outbreak of the First World War. While recently there has been an attempt to spread the blame, particularly by pinning responsibility on Russia, this indeed remains the mainstream position among serious historians. In the debate over war guilt, what happened next is often ignored. However the conflict started, Germany took full advantage to carry out a war of conquest and aggression. Britain’s First World War was a war of national survival, a defensive conflict fought at huge cost against an aggressive enemy bent on achieving hegemony in Europe.

As it stands, the Government’s position of neutrality regarding the meaning of the war denies the commemorations the context necessary to make sense of them. The UK’s leading historian of the First World War, Professor Sir Hew Strachan, who is a member of the Government’s own advisory committee, early on described official plans for the commemoration as ‘conceptually empty’. Strachan’s criticisms remain valid. The Government has explicitly disavowed trying to create any particular ‘narrative’, but by refusing to set the commemorations into the context of the origins of the war and the aggression of the Central Powers, this is exactly what it has done. Merely commemorating the sacrifice of British troops without explaining why they died tacitly gives support to the dominant popular view that the war was futile and the deaths meaningless. So does the fact that the original programme of official commemorations included defeats such as Gallipoli and the First Day on the Somme, but omitted the great victories of 1918 that won the war, such as Amiens and the breaking of the Hindenburg Line. The assurance given in June 2013 by both the Ministry of Defence and the Department of Culture, Media and Sport that the Battle of Amiens would be appropriately commemorated on its centenary in August 2018 is greatly to be welcomed.

The reason for the Government’s squeamishness has been blamed on what might be termed the Basil Fawlty/Noël Coward approach – ‘don’t mention the war/let’s not be beastly to the Germans’ – but concern at domestic reaction is probably more important. In 1994 and 2004, the time of the 50th and 60th anniversaries of D-Day, Conservative and Labour governments had no problem in blaming Nazi Germany for the Second World War or in celebrating the defence of democracy. But it seems the First World War is different. It is hard to overestimate the extent to which the idea of the war being ‘futile’ and the battles meaningless bloodbaths conducted by callous and criminally incompetent generals is (to use an appropriate word) ‘entrenched’. In a two-decade career as a public historian, putting forward alternative views on television, radio and in the press, I have become well aware that daring to suggest that Blackadder Goes Forth is not actually a documentary brings forth paroxysms of anger. I therefore have some sympathy for politicians who do not want to offend members of the electorate: after all, they want to be re-elected. Dr Andrew Murrison, MP, the prime minister’s lead for the centenary commemorations, deserves great credit for breaking ranks to state that for the British the war was just.

There is much in the Government’s commemoration plans that should be applauded, but I cannot approve of the decision, for political reasons, to take the path of least resistance by maintaining its non-judgmental stance. No one wants to see five years of German-bashing, but we run the risk of missing a (literally) once in a century opportunity to educate the public about the war. For the government to show leadership by showcasing the wealth of scholarly research that undermines the Blackadder view might be politically risky, but it is the right thing to do.

Professor Gary Sheffield takes up the Chair of War Studies at the University of Wolverhampton in September 2013. He is the author of The Chief: Douglas Haig and the British Army (Aurum, 2011).