Weighing up the Evidence

What does it take to establish a new scientific truth? In the case of heliocentrism, the death of its sceptics.

It is one of the most famous quotations that was never said: Eppur si muove (And yet it moves). Galileo Galilei’s muttered protest symbolises the triumph of scientific rationality over blinkered, obstructive theology. In the face of all the facts – or so runs the mythology – Pope Urban VIII had refused to accept that the earth is in perpetual motion around the sun. He condemned the heretical astronomer to the relatively mild punishment of house arrest, although melodramatic illustrations show a handcuffed elderly man being thrust down the steps of a dark dungeon as he vainly proclaims the truth.

This conveniently versatile story has been hyped up to represent struggles not only against the Catholic Inquisition, but against other oppressive ideologies. In Nazi Germany, the playwright Bertolt Brecht fictionalised Galileo’s experiences to condemn political authoritarianism. After the war, he gave his script a further twist to condemn the American bombing of Japan and was hauled in front of the House Un-American Activities Committee.

Yet the original conflict was no straightforward clash between reason and religion. Galileo never did iron out all the objections to his sun-centred universe and, even after his death in 1642, some of Europe’s most distinguished astronomers claimed that the jury was still out – that his case was not proven beyond all reasonable doubt.

In 1651 Giovanni Battista Riccioli published his massive New Almagest, a modernised version of the renowned second-century treatise by Claudius Ptolemy. An expert on the moon, Riccioli paid generous tribute to his rival by giving Galileo’s name to a lunar crater (reserving one for himself as well). In his allegorical frontispiece, Urania, the muse of astronomy, holds up her balance for inspection by Argos, the all-seeing god. Like a god of justice, she reveals that the evidence for Riccioli’s system is weighing down the scale-pan, while Galileo’s less substantiated suggestion rises upward. A third contender, the earth-centred model proposed many centuries earlier by Ptolemy, lies discarded at her feet.

Hard evidence is supposed to be what counts in science, but at the time of Galileo’s trial discrepancies remained and influence counted. Riccioli was an eminent Jesuit, but however strongly he may have been influenced by his theological beliefs, he did make some powerful points. While he emphasised the significance of tiny details to convince his readers that the latest scientific data conformed with biblical narratives, Galileo also relied on persuasion rather than demonstration: instead of supplying incontrovertible proof, he argued rhetorically, mocking his opponents and flattering the patrons who supported his projects.

The Mountain of Truth

There is no hard evidence that Galileo ever said ‘And yet it moves’. This compelling account of a scientific martyr did not even begin to take shape until well over a century later when it was recruited to vilify the institution of the Catholic Church rather than Christianity more generally. Like the tale of Isaac Newton’s supposed inspiration beneath an apple tree, the Galilean myth first began to flourish in the 19th century when it helped to promote a new social type: the scientist, a word invented in 1833 but not in common usage until the early 20th century.

‘If I have seen further it is by standing on the sholders [sic] of Giants’, wrote Newton in a letter to his arch-rival Robert Hooke. Recycling a familiar medieval image, Newton concealed a cruel subtext in his words; although apparently rejecting Hooke’s accusations of plagiarism, he was also mocking his adversary’s small stature and deformed spine. Even so, during the 19th century his offensive remark was incorporated within a mantra of progress. Victorians portrayed their predecessors as intellectual athletes, as Olympic champions handing on the flame of genius from Nicolaus Copernicus to Galileo to Newton while they scaled the Mountain of Truth. Even Stephen Hawking attempted to join in, boasting in a Star Trek episode that he was born in 1942, exactly 300 years after the death of Galileo and the birth of Newton.

Such pictures of ineluctable progress encourage intellectual snobbishness towards the past. How tempting it is to laugh at earlier beliefs, to wonder how people could have clung so obstinately to ideas that now seem patently ridiculous. But not all conservative reactions are reactionary: it often makes sense to be cautious. Why abruptly abandon a theory that may be imperfect, but has satisfactorily answered many questions since the time of the Greeks? Very sensibly, astronomers demanded hard evidence – and over 100 years went by before a sun-centred universe ticked enough boxes to pass the test.

The romanticised story starts in 1543. Copernicus, a Catholic canon living in the central European city of Toruń, put the sun at the centre of the universe – but, as his revolutionary On the Revolutions of the Heavenly Spheres was published on the day that he died, he was spared the ensuing furore.

There are several flaws in the myth. To start with, by ignoring the Islamic mathematicians who preceded Copernicus, it places the origins of modern astronomy firmly within Europe. It also conceals national tussles over his origins; for example, Poles who regard Copernicus as their greatest scientific hero resent German claims. Commemorative stamps with the spelling Kopernikus appeared under the DDR regime to mark the 400th anniversary of his birth and similar ones were produced in 1943 during the Nazi occupation. Polish exiles in New York retaliated by commissioning a miniature featuring the University of Kraków and other patriotic symbols. So much for science without frontiers.

Copernicus is a problematic protagonist to enlist in any supposed war of reason versus religion. A devout Catholic, he appealed to the pope for support; although his book was welcomed by technical astronomers, it was more or less ignored by everybody else. His major achievement was to reduce the mathematical complexity of Ptolemy’s traditional earth-centred theory, which entailed planets following intricate looping paths created by invisible circles rotating about one another. By putting the sun in the middle, Copernicus eliminated many of the messy calculations, which made it far easier to ordain suitable dates for Easter and other Christian festivals.

Copernicus never knew that his book had been undermined in advance by an unauthorised preface, which emphasised that his neat system might not represent reality: even if his mathematical model gave the right answers, it was not necessarily true. This comforting argument was less contrived than it might seem, because mathematicians and natural philosophers traditionally played distinct roles. Mathematicians described the universe quantitatively and solved practical problems by aiming a cannon ball or working out the calendar. In contrast, natural philosophers provided qualitative explanations that tried to elicit fundamental causes rather than specify precise details.

While the preface to Copernicus’ Revolutions defused the revolutionary potential of heliocentrism, astronomers were also stressing rational arguments for keeping the earth in its central position. Most obviously, nobody could feel the ground beneath them hurtling through space. Its stationary state also seemed confirmed by empirical observations – if you shoot an arrow up into the air it lands back at your feet and distant stars seem to stay in the same place relative to one another. Aristotle’s philosophy had prevailed for the past two millennia, so that everybody believed – which means they thought they knew – that the mundane earth lies at the centre of the cosmos and is constructed completely differently from the divinely pure heavens.

Observant astronomers were dazzled out of their complacency in 1572 when a bright new object appeared in the sky and shone for a couple of years before gradually fading away. What would now be explained as an exploding star represented a severe challenge to medieval Aristotelianism, which maintained that, as the realm of God, the heavens are eternal and unchanging. The mystery deepened five years later, when a comet flashed around the celestial zone far beyond the conventional limit set by the moon’s orbit.

The route to the future lay through more accurate measurements, but telescopes had not yet been invented. Europe’s finest naked-eye instruments were assembled on the small island of Hven, a gift from the king of Denmark to Tycho Brahe for his massive observatory, Uraniborg. Unlike Copernicus, this aristocratic astronomer was power hungry, even setting up his own printing press for distributing promotional material. He was particularly proud of his giant wall-mounted quadrant, a brass arc around two metres high used for pinpointing the positions of stars. In his ingenious trompe l’œil picture, Tycho points across the backdrop of a detailed mural depicting his observatory as a three-tiered heaven, earth and hell – the rooftop for astronomy, the library for study and the basement for experiments (allegedly where he developed a suitable alloy for a prosthetic nose after he lost his own in a duel).

Tycho devised yet another cosmological model, which later formed the basis for Riccioli’s; he restored the earth to its reassuring central position, while the other planets circled around the sun as it orbited the earth. By the time Galileo became involved, three systems had been proposed – Ptolemaic, Copernican, Tychonic – but as yet there was insufficient evidence to choose between them as all three more or less fitted the available data.

Galileo’s arguments were suggestive rather than conclusive and the evidence provided by his telescope corroborated rather than confirmed heliocentric theories. Even though he bragged about the revolutionary power of his new instrument, the information it provided was regarded with suspicion by Aristotelians, who questioned the validity of using a terrestrial device to examine a celestial object.

His critics repeatedly rustled up counterarguments. After displaying the rocky lunar surface, Galileo claimed that the earth resembled the moon – but looking similar did not prove that both were racing through space. His discovery of Jupiter’s satellites implied that the moon-earth pair was not unique, but that only weakened the case for geocentrism; it did not disprove it. His testimony that Venus exhibited phases like the moon eliminated Ptolemy’s model, but not Tycho’s.

In the absence of clinching evidence, Galileo remained vulnerable. He even sabotaged himself by hanging on to the Copernican circles of divine perfection, which made it impossible for him to accommodate incongruities in the orbit of Mars. That difficulty had already been resolved by the German astronomer Johannes Kepler, who had introduced ellipses, but Galileo stubbornly refused to accept that modification.

Determined to disseminate his ideas, Galileo published an imaginary, biased conversation in vernacular Italian that ostensibly weighed up geocentrism and heliocentrism, but provocatively voiced the pope’s own arguments through an obtuse Aristotelian called Simplicio. Although a version of Galileo’s model eventually claimed victory, the pope won that round of the battle by sentencing him to nine years of house arrest. Some 300 years later, contemplating the innovations of relativity and quantum mechanics, the German theoretical physicist Max Planck pronounced that ‘A new scientific truth does not triumph by convincing its opponents and making them see the light, but rather because its opponents eventually die, and a new generation grows up that is familiar with it.’

Patricia Fara is an Emeritus Fellow of Clare College, Cambridge. Her latest book is Life after Gravity: The London Career of Isaac Newton (Oxford University Press, 2021). 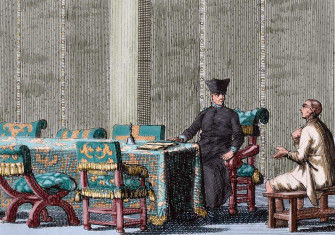 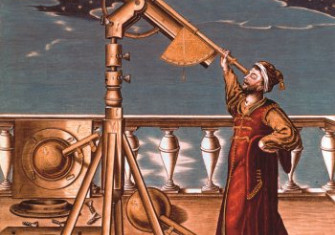