The oldest continuously used religious symbol in the western world.

The seven-branched menorah, an instantly recognisable symbol of Judaism, is much older than the Star of David. It has been in continuous use for longer than any other religious symbol in the western world; Rabbinic teaching dates it to the lifetime of the prophet Moses (1391-1271 BC).

We first read about the menorah – meaning ‘candelabrum’ – in Exodus, the second book of the Torah, when it is revealed to Moses on Mount Sinai. Moses is given instructions as to its form, the precise nature of which has caused debate ever since. A menorah should be a hammered work of pure gold and have a central shaft with three branches sprouting from either side. At the top of each branch and central shaft should be a cup shaped like an almond. These cups are to contain pure olive oil, which will light the Temple. It is written that a menorah was placed in the tabernacle that Moses was instructed to build as a portable place of worship for the Israelites after they had been freed from bondage in Egypt; there were ten golden menorot in Solomon’s First Temple in Jerusalem.

The menorah shown here is from the Sephardic Cervera Bible, created around 1300 in the town of that name in Catalonia. Its existence challenges the trope that Judaism is an aniconic religion.

The most widely disseminated representation of a menorah is the one carved in stone on the Arch of Titus in Rome, where a panel shows the menorah and other spoils of war being brought back to Rome following the destruction of the Second Temple in Jerusalem in AD 70. In 1949 this menorah was chosen as the basis for the ‘Symbol’ of the State of Israel, marking the metaphorical return of the Temple menorah.

A different type of menorah, a hanukkiah, has eight main branches, plus a ninth, normally in the centre or slightly offset (known as a shamash), which is used to light one other candle each day during the festival of Hanukkah. This festival celebrates the purification and rededication of the Second Temple in Jerusalem in 164 BC, after the successful Maccabean-led revolt against the invading Seleucid Greeks. One day’s sealed pure olive oil in the Temple was enough to light the menorah, which then burned for eight days. 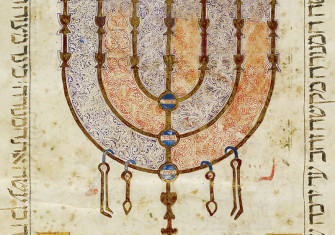 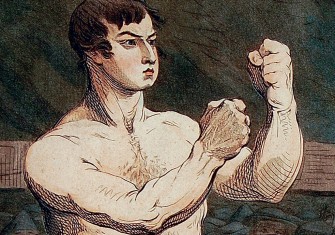