Alone in the Ruins

The Great Fire of of London destroyed everything in its path as it swept through the City. But, against the odds and popular belief, one house remained standing. 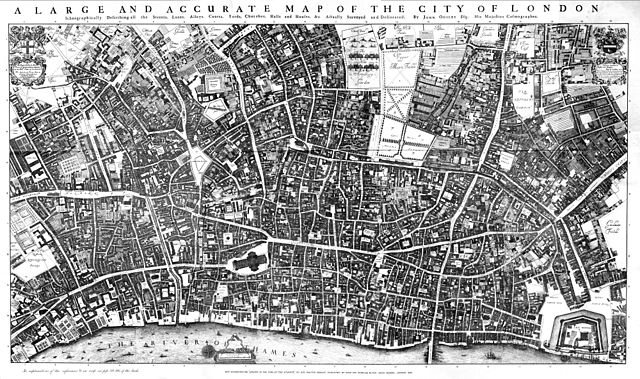 One week after the fire of London began, a judge, Sir Edward Atkyns, tried to convey the apocalyptic scale of the catastrophe in a letter:

It is impossible almost to conceive the total destruction … there is nothing but stones and rubbish, and all exposed to the open air. So you may see from one end of the Cittie almost to the other ... and you can compare London (were it not for the rubbish) to nothing more than an open field.

Some 436 acres, dense with tight-packed dwellings, had been incinerated. A week after Atkyns’ letter, another witness, Arthur Staveley, said: 'From the Tower to the Temple, I thinke, ther is not one house left.'

A handful of surviving houses have been identified on the edge of the burnt-out area (such as Fetter Lane, near the fire's north-west limit) or protected by stout walls (such as in Knightrider Street near St Paul's Cathedral, where the fire destroyed upper stories and left some ground floors). These were abandoned shells. But a document has now come to light recounting the discovery, just a few days after the fire, of a dwelling well inside the burnt-out area that was still intact and, it seems, occupied.

A Middle Temple barrister, Robert le Wright, compiled a manuscript which is now held in the British Library; a calendar of events which he thought significant for each day of the year. On September 2nd, he notes the fire of 1666: 'which within the space of three daies (being so long totally irresistable) did burne downe the whole cittie of London.'

Then comes a surprise in his only description of sight-seeing in the entire volume:

I did view the Ruines (some few daies afterwards) & found but only one small messuage or tenement (which had escaped) between the Tower of London and the Temple Church; in which one of the Butlers of the Inner Temple, was the tennant or inhabitant, situate in Whitefriars.

On that day, le Wright had walked over a desert of ash and carbonised timber a mile and a half wide, the territory described by Stavely as having no houses left. But he did see a house, standing utterly alone, with its inhabitant. This is new information.

This inhabitant, the butler, is identifiable. The Inner Temple accounts for November 1666 show a payment of £4 to three butlers, Andrew, Richard and Robert, for fire-watching. They also record repaying two years' hearth tax to one Richard Atkinson in 1664. This was a tax of two shillings a year, introduced in 1662, to be paid on every fireplace or hearth by the occupier of each building (with some exemptions). Richard Atkinson must have been in accommodation provided by the Temple. There was only one Richard Atkinson assessed for this tax in London and in 1666 he lived in a three-hearth dwelling in Whitefriars. The Temple records include his burial in 1674, saying he was one of its butlers. This was the man who le Wright found. He had been paid rather handsomely as a firewatcher to protect the Inn and its property, which evidently included the house in Whitefriars that he inhabited.

Whitefriars, named for its Carmelite monastery, was between Fleet Street and the river, just to the west of the city. The Monastery had been dissolved, but though its buildings were dismantled, recycled and replaced by private property, the monastic right of sanctuary from the law remained hanging in the air. The precinct, which had once been sanctified, now hosted a remarkable mix of villainy, immorality, cock-fighting and unlicensed theatre and publishing, in a vibrant if deeply unhygienic community wedged between the City wall and Fleet Ditch on one side and the Inner Temple wall on the other. It was referred to as 'Alsatia', after the notionally French borderland with Germany where the French king’s writ did not run, thanks to the treaties that ended the Thirty Years War. Today it would be called the Wild West.

The power of aldermen to the east and lawyers to the west was nullified in Alsatia. But that was no defence against the fire: it leapt over the City wall and ditch and swallowed up Whitefriars. After being briefly checked by the Inner Temple wall and the new brick buildings of Kings Head Walk, it gathered strength and wiped out most of the Temple. Whatever part of Whitefriars Atkinson lived in, he was not at the edge of the fire zone. To have survived, his house was probably not made of wood.

The house is identified in a 1668 lease provided by the Clothworkers’ Company for a parcel of land in the middle of Whitefriars, backing onto the burnt-out site of their almshouses on White Friars Lane. The lease says that a number of houses had stood there until the fire. It also includes a brick tenement 'which was not demolished by the late dreadfull fire'. Dorian Gerhold, preparing a publication for the London Topographical Society on the plans of London buildings in the period, has identified it as being erected less than ten years before the fire on a garden plot with space all round and its size indicates three or four hearths. It was not as flammable as its neighbours. That was the house le Wright saw. Other people who walked the ruins missed it because they stayed on Fleet Street, from where it would have been hidden by the exposed ruins of the priory.

Le Wright learned the occupant’s job, so he was probably still in the house; the butler did not have the freedom to flee because he was there to fight to save the Inner Temple and the Temple Church. That was at least achieved in part and, on the third day, the fire finally slackened.

But on the evening of the next day, when everyone was recovering, the alarm was heard:

The fire broke out again in the Inner Temple owing, as was supposed, to some sparks falling upon a pile of wooden buildings. But the Templars … succeeded before morning, by the free use of gunpowder, in stopping the progress of the flames and saving the inn from further destruction. In this they were also aided by the soldiers who had been sent to the city to assist in dealing with the fire.

One sailor climbed on the roof of the hall and beat out the flames, for which he was rewarded with £10; he seems to have died, because another £2 was paid to his widow. The Inn also rewarded a soldier who had played a significant part in this action: 'To a soldier of Kingston, for service done to prevent the firing of the hall, £2.'  That was the equivalent of around £2,000 today. The soldier would have gone home to Kingston a hero. Robert le Wright, who lived in the old fortified manor there, would certainly have heard his story.

Perhaps that explains how le Wright found the house, which no-one else seems to have seen. He may have been informed by the soldier who had fought the flames and who would have been there with the fire-watching butlers. Le Wright could have heard about the remarkable saving of Atkinson’s home and was keen to see the house and the ruins that surrounded it. That, in all likelihood, was his intended destination when he went, as soon as he could, to the Tower and then right through the whole city, down Lombard Street and past St Paul's, until he came to the home of Richard Atkinson, the last inhabitant of the great lost city. Who, it was noted, had not actually paid his hearth tax.

Alan Ereira’s book The Nine Lives of John Ogilby will be published by Duckworth Overlook in November.