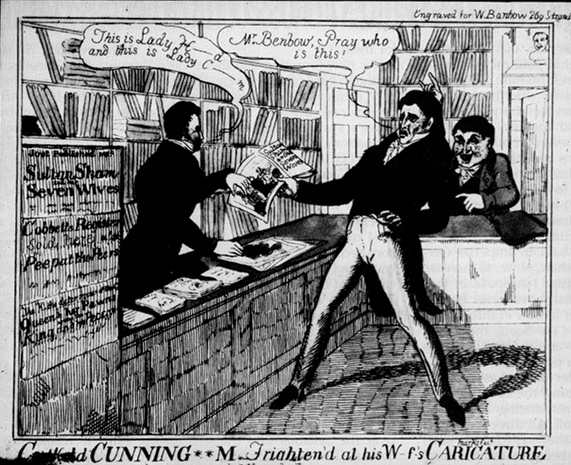 Iain McCalman’s 1988 article Radical Rogues and Blackmailers in the Regency Period drew swindlers, muckrakers and other dirty scoundrels out of history’s dark shadows and placed them in a new light. A teaser for what has since proved to be a highly influential book, Radical Underworld, the History Today article gave colourful ne’er-do-wells, such as moneylender Jonathan ‘Jew’ King, professional blackmailer Davenport Sedley and Robert Wedderburn, a mulatto tailor-come-preacher-come-brothel-house-keeper, their dues as political activists.

The moderate reformer Francis Place claimed rogues of this ilk were disruptive ‘old blackguards’, whose radicalism was violently expressed. Their brand of protest used underground methods, including extortion and scurrilous satire, to traduce the ruling order. Sedley, for instance, threatened royals and government ministers with scandalous revelations, claiming he would publish compromising material unless they paid him off. Meanwhile Wedderburn, the illegitimate child of a plantation owner and house slave, thundered anti-establishment rhetoric from the pulpit of his Unitarian chapel. Sermons decreeing that a slave had the right to kill his master and that the poor needed to be freed from elite oppression lured Home Office spies into his congregation. The ‘black rascal preacher’ was repeatedly prosecuted for his rhetoric, the courts damning as blasphemous and seditious what Wedderburn asserted as free speech.

Before McCalman’s recovery of the seamier side of radicalism, history had preferred to remember Regency reformers as largely law-abiding, working-class self-improvers who collaborated with white-collar campaigners to agitate for change. There were always insurgents who engaged in dirtier means but they, posterity suggested, were not representative of reform’s more temperate mould.

McCalman, however, argued that ordered political intent was entrenched within the projected chaos of this radical fringe. Blackmailers and hacks were strategic and unscrupulous, targeting those hostile to political reform. Indeed, the deviant lifestyles of London’s back-street rogues could be read as emphatic statements of opposition. Consequently, what outsiders condemned as reckless and criminal misconduct, insiders prioritised as appropriate anti-establishment theatre. Moreover, the division historians had previously drawn between a ‘successful’ and respectable reform tradition and a bawdy and unproductive radicalism not only misrepresented the contributions of the latter, but also obscured the relationship between these different realms.

The impact of  McCalman’s study reaches far beyond the immediate context of dissident radicalism. On the face of it my own research interests lie in a very different part of Georgian London – the fashionable world of the beau monde, resident in candle-lit drawing rooms rather than London’s darker alleys and alehouses. Yet it was precisely the prestige and inherited privilege of high society that the tavern-based malefactors conspired to subvert. The infamous scandals that followed in fashionable society’s wake (told through satires, caricatures and kiss-and-tell-memoirs) were long held up as irrefutable evidence of the beau monde’s frivolous excess. We now know, though, that such gutter-press productions were much more than jolly Georgian banter. They were often the sharp end of a radical weapon unleashed to undermine politicians, peers and princes alike.

McCalman noted that: ‘The practice of using scandal for both personal gain and the political discomfiture of the ruling-class enemies remained part of the popular radical tradition at least until the 1840s.’ Subsequently, scholars such as Anna Clark and Gillian Russell have looked backwards to find political purpose in the gossip of previous generations of Georgians. And it was not just anti-establishment radicals who dirtied their hands creating bawdy print copy. From lewd depictions of the Duchess of Devonshire canvassing for her ‘favourite member’, Charles James Fox, to titillating exposés of Mary Wollstonecraft’s unconventional love life, the conservative establishment similarly deployed below-the-belt squibs as a defensive weapon. High worlds and low worlds, marginalised radicals and mainstream powerbrokers were all culpable in making the Georgian age  an age notorious for scandal.