A Sobering Look at Boozy Britain

Binge drinking is seen as a British disease, but its causes are complex and politicians intrude at their peril, says Tim Stanley. 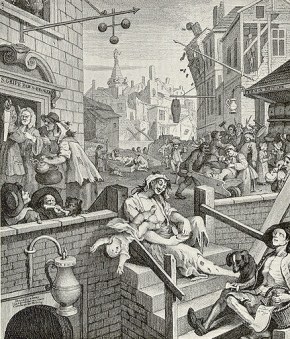 Aside from being fun and illuminating, History Today’s latest ebook, Last Orders: A Social History of Drinking, is also timely. The UK government is trying to crack down on binge drinking, which Tony Blair famously called ‘a new British disease’. The Prime Minister, David Cameron, wants to introduce minimum pricing for individual units of alcohol in order to discourage consumers from imbibing too much, too fast. Supermarket ‘value vodka’, or happy hour cocktails, might become a thing of the past.

Last Orders offers two interesting perspectives on this war on booze. First, binge drinking isn’t a ‘new’ disease – it’s a very old one. The first Licensing Act was passed in 1552, requiring alehouse keepers to acquire licenses from local justices because of all the ‘intolerable hurts and troubles’ that arose from public drunkenness. It did little good, as evidenced by a 1628 pamphlet by the Puritan Richard Rawlidge, called A Monster Lately Found, or the Scourgin of Tiplers. In it Rawlidge pointed out that, while there were fewer than 130 churches in London, there were ‘above thirty hundred alehouses’.

In the latter part of the 17th century Parliament encouraged the sale of gin as a patriotic alternative to French brandy. As a result of deregulation the price of gin fell and consumption sky-rocketed. By 1734 an astonishing five million gallons of this raw spirit was being drunk every year, enough for every man, woman and child in London to knock back a pint a week. Gin was a social leveller: Queen Anne was nicknamed ‘dramshop’ for her regular imbibing and the stuff was sold in Clerkenwell from wheelbarrows. The iconic image of the so-called Gin Craze was Hogarth’s 1751 print Gin Lane. In the middle of the picture sits a prostitute, addled by drink. As she smiles blissfully at an emaciated pauper, her baby slips from her arms to its certain death. Gin wasn’t just a disease. It was a plague.

Initially consumption fell. But the urban poor who had become addicted to the spirit were unable to kick the habit. They turned to illegal sellers and drank vast quantities of poisonous ‘hooch’. By 1740 consumption actually exceeded the pre-Gin Act levels, with production rising by a third. Social divisions were exacerbated: the lifestyle of the rich was barely affected by the tax, while the poor were driven further into destitution. Poorer gin-sellers were put out of business and turned to … gin. The obvious iniquity of this situation – much like the enormous disparity between rich and poor in contemporary society – politicised bad behaviour. People drank heavily in large part just to protest against the anti-drinking ordinance.

In 1743 the Act was repealed. What eventually ended the gin craze was a sudden rise in the price of corn. The poor had to spend their income more judiciously and as one generation of inebriates died off a more sober epoch took its place.

It is often presumed that ‘the British disease’ is genetic – that somehow Celtic and Anglo-Saxon societies have a natural predisposition towards drunkenness. Certainly that is our reputation abroad. To foreigners it can often seem like the British ‘drink as if they don’t want to live’.

But Last Orders is a sobering reminder that chronic alcohol consumption is actually the product of a whole range of social pressures and often a symptom of a greater cultural crisis. Governments typically misread drink as the cause of that crisis and try to regulate it away. This almost always backfires. It either leads to civil disobedience or the further impoverishment of addicts. David Cameron, take note.

Buy Last Orders: A Social History of Drinking from the Amazon store: