Into the Melting Pot

Who is and who is not an American? The question goes back to the Revolution. The answer is always changing, says Tim Stanley. 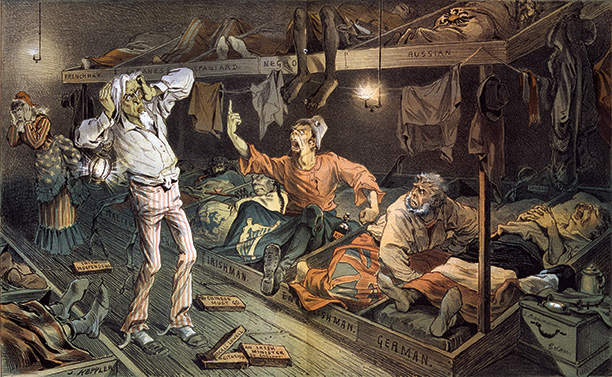 The US is ‘over’, or so think some on the American Right. Given how weak the economy is, they are saying that the only way to understand President Obama’s re-election is through the prism of race. In a representative article titled ‘America Reaches El Tipping Pointo’ the polemicist Ann Coulter argues that Obama won in 2012 thanks to the growing tide of Hispanic immigration. Coulter says that Hispanic voters ‘are less likely to be married, less likely to go to church, more supportive of gay marriage and less likely to call themselves “conservative” than other Americans’. They are, in Miss Coulter’s estimation, not very American at all.

The question of who is and who isn’t an American is as old as America itself. Wave after wave of immigrants have been accused of being un-American, slowly integrated into the society around them and, in time, become redefined as paragons of Americanism.

Consider how long it took for European Catholics to become an accepted part of the US melting pot. The 1790 Naturalization Act offered naturalisation to any ‘free white person’; until 1920 the legal definition of ‘white’ applied to Mexicans. But the colloquial definition of ‘white’ was narrower. Naturalised Americans did not automatically accept the whiteness of the large numbers of Catholics, Orthodox Christians or Jews who settled in the growing cities. A political dynamic arose whereby the stigmatised incomers became part of trade unions or local Democratic Party machines, creating widespread fear that an un-American ‘bloc’ of voters might manipulate democracy to change the character of America for good. They could even ferment socialist revolution. The backlash climaxed in the Immigration Act of 1924, which placed caps on certain groups with the explicit goal of protecting ethnic homogeneity.

Violence against Catholic ‘non-whites’ was common. The largest public lynching in history was that of 11 Italians in New Orleans in 1891. The Irish were commonly portrayed by newspapers as lazy, drunken, prone to superstition and criminal. The hatred reached pseudoscientific proportions. In 1899 Harper’s Weekly carried a drawing of three men’s heads labelled ‘Irish’, ‘Anglo-Teutonic’ and ‘Negro’ to claim some similarity between the Irish and the African-American skull.

Yet the political and cultural segregation of Protestant and Catholic white Americans eventually disappeared. In 1960 America elected a Democratic president of Irish Catholic descent. In the 1972 presidential election the Republican Richard Nixon made European Catholics a key part of his New Majority coalition that was based, in part, on a deeply American variety of cultural conservatism. He won 52 per cent of the Catholic vote (and surely nothing says ‘100 per cent American’ like voting for Tricky Dick Nixon). Today the Catholic Church is America’s largest religious denomination. There’s a good reason why both Democrat and Republican tickets had a Catholic on them.

Of course there are vast differences between the Irish or Hispanic historical experiences and no reason why one pattern of integration should follow another. But it is instructive to note that a) the panic of ethnic ‘takeover’ has occurred many times before and b) the offending group has, over time, actually evolved into a fairly conservative part of the population.

Conservative fears about immigration stem in part from the way that they read American history. Conservatives tend to see all US history as beginning and ending with a singular event: the American Revolution. It is as if America did not exist before it and was held in a state of pure sleep after it – until rudely awoken and molested by the arrival of modern liberalism and mass immigration in the 1960s. The reality is that the meaning of America has ebbed and flowed, while the experience of being part of it has never been the same for everyone. The very landscape of the USA is like a palimpsest, with one civilisation built upon the faint traces of the other. In the southwest you’ll find cliff dwellings of the Navajo and the European missions of the 18th century; in downtown Los Angeles, old Mexican markets carefully preserved for the tourists and pickpockets. American history is larger than that of George Washington and it won’t end with Barack Obama.