In challenging times Britons seek comfort in a past that never existed. Tim Stanley shatters their illusions. 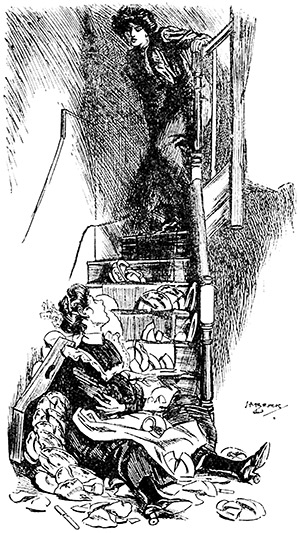 You can tell a lot about a people from the television programmes they watch during a recession. While Americans often resort to Armageddon (The Walking Dead, Falling Skies), Britons tend to indulge in nostalgia. In the recession of the 1980s it was Brideshead Revisited; during the downturn of the 1990s it was The Darling Buds of May. Today it feels like everyone has fallen in love with ITV’s Downton Abbey. Everyone except me.

Depicting the lives of the aristocratic Crawley family in Edwardian England, Downton Abbey is more of a well-informed soap than a piece of serious historical drama. The plot is pure Coronation Street, while the dialogue feels as if it is culled from Wikipedia (it’s not uncommon for a character to exclaim something like ‘I thought the Titanic was supposed be unsinkable?’). The careful viewer can occasionally spot double yellow lines in the roads or TV aerials on the chimneys.

But the show’s greatest inaccuracy is its false memory of class relations. Writer Julian Fellowes has presented the domestic staff almost as an extension of the aristocratic family; they offer advice to the pretty-but-dim Crawleys and the kitchens seem as well mannered and hierarchical as the rooms above. The family is remarkably kind to its retinue. We see a gay servant being protected after he’s caught making a pass at a footman and a favourite valet gets legal support when accused of murdering his wife. A small amount of indigestion is caused when a daughter runs off with the Irish chauffeur, but all is forgiven within an episode or two. Everyone is so achingly, awfully decent about everything.

For real-life Edwardian servants things would have been very different. They inhabited a world of class boundaries that had its own geography – servants entered the household invisibly through their own doors and patrolled the house along their own corridors. They often stank, which was ironic because, as the historian Jennifer Newby (a vocal critic of Downton) notes: ‘They would have been seen rather like the way we look at our washing machine, just something to give us a clean shirt.’

The subservience of the staff could vary according to personality. In Knowing Their Place: Domestic Service in 20th-century Britain (2011) Lucy Delap writes that while some maids were reduced to emasculated silence, others found ways to rebel that could be rather menacing: ‘spoiling food, serving meals late, feigning not to understand orders, working slowly or sulkily’. Best of all, some used ‘offstage laughter and slammed doors’ to unsettle their employers. One mistress confessed that the servants, ‘scared me stiff; I had no idea how to manage them; in fact, they managed me’.

More tragic is the way that service undermined the servants’ relationship with those who should have been equals. Sexual relationships were constrained by the needs of the house; marriages and babies could lead to dismissal. One servant given authority over another invariably had to be cruel and distant in order to be taken seriously. The devotion that nannies were supposed to exert over their wealthy charges was probably rare. Nanny Dora Holtom described a painful encounter with an aristocratic child in the 1930s. He demanded: ‘Who said I’ve got to go and wash now? Why should I? Who do you think you’re talking to?’ The boy had begun to realise his social superiority to the woman who had hitherto treated him like a son. ‘One day, I’m going to be Lord Allendale, and then nobody will tell me whether to wash or not.’

It is hard to imagine another people in the world who would make such warm drama out of such a potentially miserable era. Imagine if a US company relocated the show to the Deep South in the 1910s. Would it paint a similarly rosy picture of master-servant relationships in the age of segregation? Yet the British continue to suspect that they lost something special, even moral, when their society graduated from an aristocratic empire to a modern democracy. Like all nostalgics, we take comfort in a past that only seems so good because so few are alive to remember it well.