The Contrarian: History Predicts A Riot

There is nothing new or exceptional about the recent English riots and they will have little long-term impact, argues Tim Stanley. 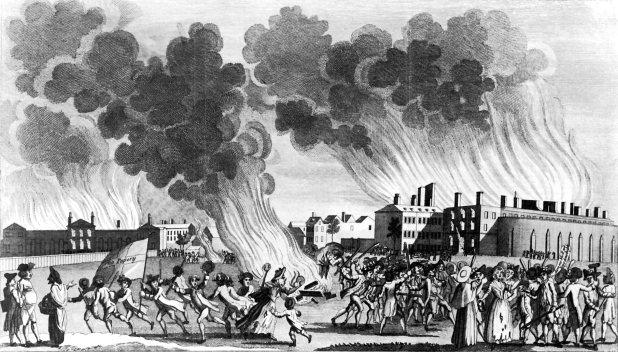 Most of the British press treated the August riots as a historical aberration: something to be blamed on government policies, or even the weather. We associate mob violence more with the French than we do ourselves. But, in fact, sporadic civil disobedience has a long tradition in British history. We are a far more demonstrative and brutal a people than we would like to admit.

In 1778 the British government decided to mitigate its anti-Catholic policies by passing the Papists Act. The Protestant population of London, which was already suffering due to loss of trade resulting from the American War of Independence, was outraged. Lord George Gordon, the eccentric head of the nativist Protestant Association, argued that the Act was an attempted coup d’etat by Catholics and absolutist monarchists. One of its provisions eased the restrictions on Catholics serving in the army – a direct attempt, Gordon said, to arm the Irish and depose Parliament. He called for a march on Westminster.

On June 2nd, 1780 a crowd of around 50,000 stormed Parliament. The government had grossly underestimated the strength of feeling against it and failed to mobilise the army quickly enough. Members of the House of Lords were attacked and carriages ransacked. Once the mob was dispersed, the government presumed the worst was over. In fact, as in 2011, the rioters simply moved on. That night, they ransacked the embassies of Catholic nations like Sardinia and Bavaria. What began as a religious revolt turned into an act of class war. Rich people’s houses were looted and burnt, shops were emptied. The mob targeted Catholics, granted, but also vandalised the Bank of England. London’s prisons were broken into and hundreds of prisoners released, never to be caught again.

Police reports and diaries from the time make reading that is eerily similar to the reportage of 2011. The politician Horace Walpole (1717-97) wrote that one friend, ‘had seen the populace break open the toll-houses on Blackfriar’s Bridge, and carry off bushels of halfpence which fell about the streets ... Most of the rioters are apprentices and plunder and drink have been their chief objects, and both women and men are still lying dead drunk in the streets: brandy is preferable to public enthusiasm.’

The Gordon Riots were eventually quelled by military force. In their aftermath many people asked similar questions to those being posed today: why did people feel unable to express their views through their parliamentary representatives? Was this an insurrection driven by legitimate grievances or an excuse for criminality? Across Europe, Britain’s reputation as a stable democracy was shattered. Just ten years later, the French Revolution offered a radical alternative to government by sovereign parliament. In the wake of the Gordon Riots, many Britons prayed that it would work.

British history is littered with episodes such as this. In 1517 Londoners rioted against wealthy foreigners. They broke into shops and looted homes. During the Industrial Revolution poor weavers attacked new machinery and destroyed workshops in an effort to protect their livelihoods. In 1985 Afro-Caribbean youths in Brixton and Tottenham rioted in protest at police brutality.

Two themes stand out. One is the reclamation of private property by the mob: an unofficial act of redistribution. Perhaps this is rank opportunism; perhaps it is a nascent act of socialism. Either way, British civil disobedience almost invariably descends into an attack upon the rich. The second theme is the lack of long-term political organisation. French rebellions tend either to be motored by the activist Left or appropriated by it. British riots are comparatively short-lived and useless: they never change the landscape of mainstream politics. Usually they reinforce the legitimacy of the powers-that-be. The result of the Gordon Riots wasn’t social reform but the introduction of the modern police force.

In the aftermath of the 2011 riots, many have asked what is so broken about contemporary British society that it erupted so easily into violence. But that question overlooks the fact that it is social peace that is historically atypical, not social unrest.

The riots and the lessons of history