Civil War Women: Not Behaving as they Should

A 1972 essay on women petitioners of the mid-17th century anticipated greater engagement with the political ambitions and private lives of ordinary men and women, says Alice Hunt. 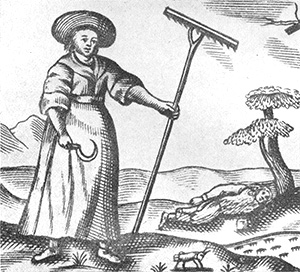 David Weigall’s Women Militants in the English Civil War is about the riotous Englishwomen – wives, widows, mothers – who petitioned Parliament for food, peace and their husbands’ release from prison. In 1972 historians were just beginning to shift their focus towards the lives and beliefs of ordinary men and, eventually, women. Energised by the women’s movement, feminist historians and literary critics during the 1980s and 1990s began to draw out the early modern Englishwoman from the traces left behind in records and the few books she wrote. Umbrella histories soon appeared – Olwyn Hufton’s The Prospect Before Her and Patricia Crawford and Sara Mendelson’s Women in Early Modern England. Writing the history of women became harnessed to thinking about gender, including masculinity. So in Ann Hughes’ Gender and the English Revolution (2012) ‘inadequate men’ jostle with ‘women at war’. We now write books with ‘women’ and ‘politics’ in the title without having to mention Elizabeth I.

Women rioters, petitioners, writers, prophets, preachers and soldiers inhabited the upside-down world of Civil War England. In the early 1970s Weigall was among a handful of historians to follow up what little work had been made on these women, let alone on their political activism. In 1909 English Historical Review published Ellen McArthur’s ‘Women Petitioners and the Long Parliament’. In 1929 Ethyn Morgan Williams wrote about women preachers and in 1958 Keith Thomas published a pioneering essay on women as founders and members of religious sects. Yet a decade later Peter Laslett could still write that ‘no woman ever belonged to England as an individual, except it be a queen regnant’.

Printed petitions offer historians glimpses of women, from both sides of the political divide and from all ranks. Lampooned as ‘oyster wenches’ and ‘fishwives’, they thronged Palace Yard bearing complaints about the decay of trade, debt laws and the state of ‘this wretched kingdom’. On occasions, up to 5,000 women were reported to be swarming around Parliament. As Weigall acknowledges, women had been stirred to action before the 17th century, but the vigour of their petitions in the 1640s was unprecedented. At times they resorted to violence and were trampled on by horses or shot at in return.

By petitioning, these women knew that they were not behaving as they should. They were sent home, to ‘meddle’ with their ‘huswifery’. In 1909, amid the Suffragettes’ first hunger strikes, McArthur saw these women as ‘forerunners’ of the movement for female emancipation. Weigall makes a similar claim: these women are ‘worthy precursors of the later Suffragettes’. He means the Leveller women, such as Katherine Chidley and Elizabeth Lilburne (those ‘lusty lasses’), whose petitions of 1649 introduced a new assertiveness. They declared their ‘equal share and interest with men in the Commonwealth’. But Weigall is baffled by the fact that they did not go further. ‘Is it not surprising, then, that for all their explosive zeal, the women do not appear to have demanded the vote?’ he asks. Yet no one ever suggested that women could vote, not even the Leveller men. The year after Weigall’s article, Patricia Higgins wrote an essay on women petitioners in which she noted the caveats: the petitions may not have been written by women; demonstrations were reported to have been egged on by men; and the equality demanded was spiritual, not political. Higgins stressed that we need to remember the ‘excessively patriarchal air’ that these women breathed. It was impossible for them to propose, as Weigall does, ‘political equality between the sexes’.

Looking for the roots of modernity in the 17th century is tempting, but tricky. The ‘explosive zeal’ of Weigall’s women petitioners died down in the latter half of the century. Weigall was right, though, as later historians would also claim, that Pandora’s Box had been opened. Most importantly, he wrote about women as political beings. Scholars now look beyond printed petitions to find politically engaged women in other places: in their poetry, letters and private lives. Weigall’s article reminds us just how recent a historical move this is.

Alice Hunt is a senior lecturer at the University of Southampton. She is writing a book on the English Republic, to be published by Faber and Faber.