Jonathan Downs reports on the fire last December that caused extensive damage to one of Egypt’s most important collections of historical manuscripts. 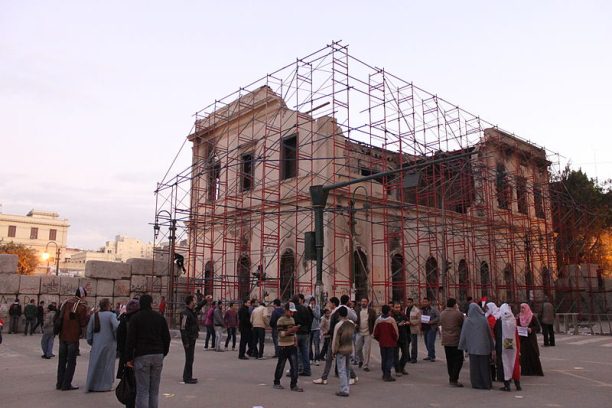 Just before Christmas 2011 the cultural world was rocked by the devastating news that Cairo’s Institut d’Égypte had been ravaged by fire. The repository of over 200,000 antique volumes and ancient manuscripts, many gathered by the original French savant scholars who accompanied Napoleon’s invasion in 1798, the Institute was the oldest of its kind in Egypt and the Middle East. That is until a protester’s Molotov cocktail flew through a window on December 17th.

The riots with government forces in central Cairo began with the ruling army’s failure to establish a greater level of democracy than under the oppressive Mubarak regime. The Egyptian army has cracked down with an internationally condemned savagery, assaulting protesters in the streets, escalating public frustration and violence. The Institute became the latest victim of this civil strife: a group of protesters, since denounced as ‘thugs’ by Egyptian commentators, were engaged in a missile exchange with soldiers outside the Shura council building in Qasr al-Aini Street when one of them lobbed a petrol bomb and hit the Institute in nearby Sheikh Rihan Street. This cost Egypt nearly 170,000 works of its priceless cultural heritage.

As the blaze took hold protesters and soldiers alike ran into the burning building to rescue what they could while the fire brigade fought its way through the anarchy of the Cairo streets, only to arrive far too late. In the end some 30-40,000 works were saved. However the toll was heavy: the Atlas of Lower and Upper Egypt of 1752 is gone, as is the Atlas of the Old Indian Arts and the Atlas Handler, a German publication of 1842 from Muhammad Ali’s collection, thought to be the only remaining copy in the world. The most lamented casualty, however, was the unparalleled work of Napoleon’s savants themselves: Cairo’s own copy of the gigantic 20-volume Description de l’Égypte went up in flames.

Although founded by Europeans during the 18th-century Enlightenment, the institute is a listed Islamic and Coptic monument. With perhaps a fitting sense of history, or irony, the first action of the minister of antiquities, Muhammad Ali Ibrahim, was to contact the French ambassador in Cairo to seek French aid in restoring the damaged building.

‘This crime was planned by saboteurs,’ insisted Ibrahim. ‘Every Egyptian saw them on satellite TV, setting fire to the ground floor of the building.’ Nehal Abdel-Aati, a 20-year-old faculty of engineering student, said: ‘The people who did this cannot be described as revolutionaries, who would never do anything so unethical. They can’t even be described as Egyptians, as they want to tell the world that Egypt has no place for knowledge,’ she added.

The Description was published over two decades from 1809-29 and comprises images of such detail that the book remains unique in publishing history. It was so large that a special printing press had to be built to produce its pages. It was the first example of Egyptian treasures presented to Europe, consisting of the results of the savants’ three-year mission for Napoleon to document and record everything they saw throughout the ancient country, from Nile amphibians to the Rosetta Stone.

At 29 Napoleon was a dangerously powerful figure in France and his desire to conquer Egypt and open the ancient Suez Canal to attack India was viewed with some enthusiasm by a government that was happy to see him and his personal army as far from Paris as possible. The resulting invasion was achieved with 50,000 men in 400 ships – a fleet more than twice the size of the Spanish Armada.

Including some of the finest artists in France, the savants dispersed across the land to paint, sketch and record every ancient monument they encountered, their labours resulting in the birth of Egyptology and the European rediscovery of antiquity’s oldest civilisation. Arguably the most famous of their treasures was the Rosetta Stone, delivered to the Cairo Institute in August 1799 but handed to the victorious British who counter-invaded Egypt and defeated Napoleon’s depleted army in 1801.

The original Institute had comprised the former homes of defeated Mameluk leaders, Hassan and Qassim Bey in particular, quickly converted by the savants to libraries, laboratories and lecture halls open to all; the learned men of the city’s al-Azhar Mosque once visited to witness French chemistry experiments in one of the first inter-cultural scientific exchanges of the day. The Institute has continued to act as a focus for Egyptological sciences and interdisciplinary study.

All is not lost for the Institute, however, as Sheikh Sultan al Qassimi, governor of the Emirate of Sharjah, announced he would bear the cost of the building restoration personally and donate some of his own rare acquisitions to it. Neither is this the end for the Description, as several copies do exist in Britain and France; indeed it could become a further bridge to the old colonial European powers in the debate for artefact repatriation, exchange and joint ownership.

Though the 2011 revolution worried many observers the regime change provided a faint hope for the campaign to repatriate Egyptian artefacts such as the Rosetta Stone. But the fate of the Institute must call this into question. Although once again Egyptian nationals rushed bravely to the aid of their country’s heritage, one must ask why the Institute collections had been left vulnerable to the danger of constant riot and street violence. When the bombing of London seemed a likely prospect in 1939 the British Museum moved the Rosetta Stone to the bowels of the London Underground for safekeeping; consequently it survived the onslaught of the Blitz without a scratch. After the burning of the Institute the safety of other historic buildings like the Cairo Museum has finally been called into question.

Considering the widely reported abuses of protesters by the military – particularly of Egypt’s young women, some of whom have been brutally attacked, humiliated and sexually assaulted by soldiers – the repatriation of cultural artefacts becomes more and more unlikely, sliding further down a growing list of priorities in a troubled nation. Unless the Egyptian government bows to its mandate to create an accountable democracy the international condemnation will continue and Egypt’s role as the leader of the Arab Spring will be forever tarnished.

Jonathan Downs is the author of Discovery at Rosetta (Constable, 2008) and a visiting lecturer specialising in the history of Napoleonic Egypt.