Dan Jones argues that Nigel Saul’s article on Henry V and the union of the crowns of England and France does not take into account the long-term consequences of the king’s achievements. 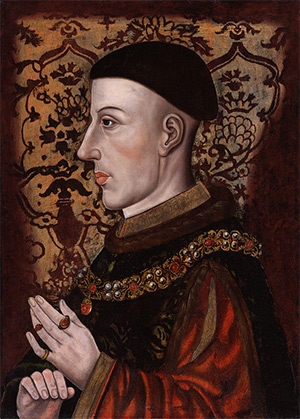 When Henry V died in August 1422 he had ruled for fewer than ten years, the shortest reign of any English king since Harold Godwinson in 1066. Nevertheless, Henry had achieved something unique: he unified the crowns of England and France.

The Treaty of Troyes, sealed on May 21st, 1420 following the battle of Agincourt (1415) and a ferocious military assault on northern France, recognised Henry as legal successor to the ‘mad king’ Charles VI of France. It disinherited Charles’ son, the dauphin, and was sealed with the marriage of Henry to Charles’ daughter Catherine de Valois. When, 19 months later, Catherine gave birth to a son, the union between Christendom’s two greatest royal families appeared complete. Two realms, two crowns, one king. Astonishing. But what next?

Nigel Saul’s 1986 article, Henry V and the Dual Monarchy, is an astute analysis of the immediate consequences of Troyes. As Saul points out, the English had claimed the French crown since the 1330s, but the claim was largely ‘opportunistic’: it was trumpeted or forgotten depending on England’s see-sawing fortunes in the Hundred Years War. The problem of what to do if the dual monarchy was actually achieved had never been seriously considered. After 1420, though, it became real – and troublesome.

Henry’s victories in France had been paid for handsomely by the English and were celebrated in London with wild street parties. Now the mood changed. Troyes, writes Saul, meant that ‘in legal terms, the war for the crown of France was over … the war between two nations had given way to one between the king of France (Henry) and his rebellious subjects (the dauphinist resistance), in which the people of England had no part to play’. From this point on it would be increasingly difficult to convince English parliaments to pay for further campaigning.

The French situation was also complicated. The realm was fractious and obstinately regionalist. Under Charles VI it had been torn in half between the factions of Burgundy and Armagnac. Henry had exploited this division, siding with the Burgundians to seize the crown. Now the division that had helped him win it became his biggest headache. A diehard opposition party would entrench itself around the dauphin to leave the English ruling not as rightful kings, but as an occupying army. The war of subjection would be even more difficult and expensive than the war of conquest.

Henry V neatly avoided most of the consequences of his triumph by dying. He was followed two months later by Charles VI. England’s struggle to maintain the dual monarchy passed to Henry’s relatives, governing in the name of the infant Henry VI (theoretically ‘Henri II’ of France). At first things went well: Henry V’s brother John, Duke of Bedford won battles (e.g. Verneuil in 1424), bombarded the country with dynastic propaganda and passed onerous penal laws against his opponents. In 1429, however, Joan of Arc turned up and the Hundred Years War turned – fatally – against England.

In 1986 Saul did not consider the longer-term repercussions of Henry V’s achievement at Troyes. But the king’s over-reach in 1420 sowed the seeds of the Wars of the Roses 35 years later. The financial and psychological pressures of defending Henry V’s conquests slowly destroyed his son’s mind and rule. Bitter rivalries began between men like Edmund Beaufort, Duke of Somerset and Richard, Duke of York, who fell out during their military service in France. Defeat at the battle of Castillon in 1453 pushed Henry VI into madness and eventually sparked a terrible war between the houses of Lancaster and York; quite an irony, given that Henry’s father had won so much by exploiting a near-identical schism between the houses of Burgundy and Armagnac, caused by the madness of Charles VI.

There was one last important consequence of the dual monarchy. Catherine de Valois, whom Henry V married at Troyes, took as her second husband a Welsh squire called Owen Tudor and her grandson, Henry, would kill the last Plantagenet king, Richard III, at Bosworth in 1485. Out of the Plantagenets’ greatest triumph came the seeds of their final defeat.

Dan Jones' The Hollow Crown: The Wars of the Roses and the Rise of the Tudors is published by Faber in September.