Eleanor Parker is inspired by a visit to a village church in Oxfordshire that bears witness to one of the most turbulent and transformative periods in English history. 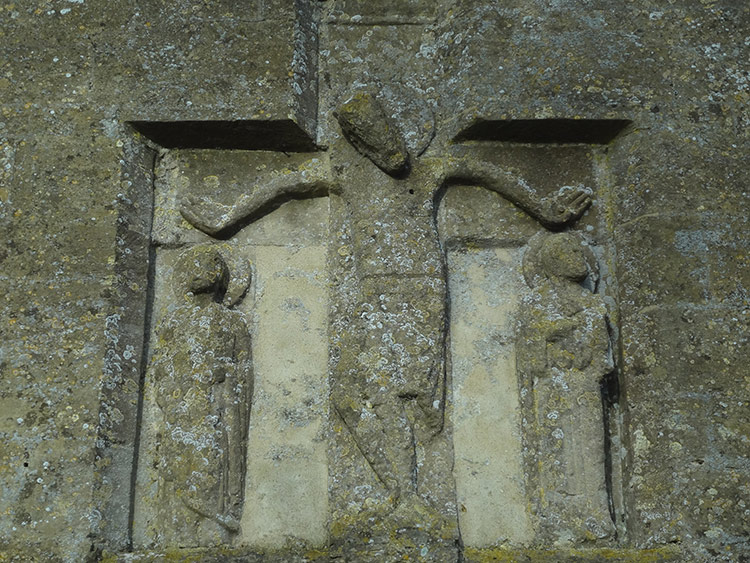 This year sees the 950th anniversary of the Battle of Hastings. The single date 1066, as shorthand for everything that happened at the Norman Conquest, occupies a unique place in English history. It is one of the few dates fixed in the collective memory and we shall hear plenty this year about the invasion as a watershed moment that changed England for ever.

Behind that story of change and loss lie many individual examples of adaptation and survival in the decades after the Norman Conquest. These stories cannot be illustrated with vivid snapshots from the Bayeux Tapestry, nor easily commemorated with round-number anniversaries, but they should be remembered this year nonetheless. There are ways to catch a glimpse of them and I recently visited a church in Oxfordshire that bears witness to this period of transition.

Langford, lying to the west of Oxford, is a pretty village built of Cotswold stone and it does not advertise its treasure of a church; you have to know what you are looking for, if you go in search of it, but it is worth finding. It possesses two extraordinary Anglo-Saxon carvings of the Crucifixion, both dating probably to the 10th or 11th century. One, now mounted on the side of the porch, is an almost life-size image of Christ. He is dressed in a long belted robe, his arms outstretched; the figure has lost its head, but hands and robe are beautifully carved. The other, smaller carving, above the door of the porch, shows the Virgin and St John at the foot of the cross, two dignified figures standing below a painfully contorted Christ.

These fine carvings presumably belonged to a pre-Conquest church on the site and must have been commissioned by a wealthy patron: plausibly, by one of the earls who held these lands in the first half of the 11th century, either Leofric, Earl of Mercia, or Harold Godwinson, who by 1066 owned the estate of Langford. Both Leofric and Harold are known to have given generous gifts to churches, including crucifixion scenes that may have resembled those at Langford.

Harold was noted for his devotion to the Black Rood of Waltham Abbey, a life-size figure of Christ made of black marble. A legend recorded in the 12th-century chronicle of the abbey claims that Harold, on his way to Hastings in 1066, stopped at Waltham to pray before the Black Rood. The king prostrated himself in prayer before Christ and the marble figure bowed its head in grief, knowing what the outcome of the battle would be.

I was reminded of this story at Langford as I looked up at the headless figure of Christ, imposing and stately despite the damage it has suffered, and it was tempting to imagine Harold coming here, too. Langford’s Saxon roods survived the Conquest when many did not, perhaps because they formed part of a church built by a man who was himself an English survivor. In the decade or so after Hastings, the church was rebuilt by the local landowner, Ælfsige of Faringdon. He was an Englishman who not only survived but prospered after the Conquest: in the years between 1066 and the Domesday survey he increased his estates by service to the new king, until he held lands in Oxfordshire, Berkshire and Gloucestershire.

Ælfsige rebuilt the church at Langford in a style as much Saxon as Norman, with a massive central tower (older than the Tower of London, as my guide proudly informed me). He built at a moment of transition, before new architectural fashions had taken hold, and nearly a thousand years later his tower stands as a tribute to his ambition and success. Was he trying to make his mark by building this church, attempting to impress his new lords? For some historians a degree of suspicion attaches to those, like Ælfsige, who did well out of the Conquest and there is a tendency to talk about them as collaborators, even traitors, but we should not be quick to judge. The stones in the tower of Langford were laid in a time of uncertainty, when no one could predict what would happen five years on, let alone 950.

Significant anniversaries offer an opportunity to re-examine particular historical moments, but there can be a danger of over-simplifying, focusing on a single date at the expense of what came before and after. Langford offers an antidote: with its exquisite roods, it bears testimony to the artistic and cultural sophistication of late Anglo-Saxon England, but it is also a monument to Ælfsige, the survivor, making his way in a changing world.

Eleanor Parker is a medievalist and author of A Clerk of Oxford.