Apps and websites for learning more about the politician and wartime prime minister. 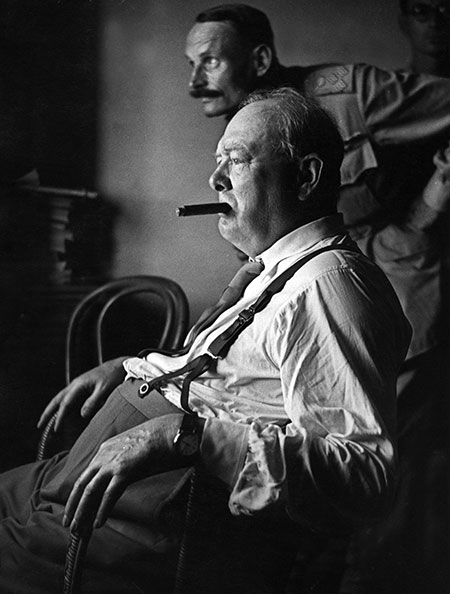 Churchill’s mark on history is extensive and requires intellectual consideration beyond the traps of hagiography. Now, studying his legacy and its global effects has been made much more convenient by a number of online resources which are useful and enlightening to academic historians, students, enthusiasts and schoolchildren alike. Arguably, the most high profile digital embodiment of Churchill is the app Think Like Churchill, released in 2014 by the app developer Touch Press (with Hodder and Stoughton). Narrated by Boris Johnson, the app works like an interactive graphic novel centred on crucial moments in Churchill’s life, in which the user tests their decision-making abilities against Churchill’s and their choices are analysed and evaluated. While the app was primarily designed for younger neophytes of Churchill, it is enriched by historical documents from the Churchill Archive Centre in Cambridge. The app’s greatest current drawback is that there is no Android version.

Bloomsbury recently launched its open access website, Churchill Central, a hub for Churchill-related organisations to collaborate on events and contribute to the ever-expanding Churchill digital profile. It sports an interactive timeline of Churchill’s life, with an entry for each year and allows you to browse documents, photos and film clips. The video blog, Talking Churchill, has Churchill scholars discussing various aspects of his life (a project with which this reviewer is involved).  For younger enthusiasts, the website contains a scavenger hunt designed to help them engage with Churchill’s legacy in an entertaining way, and, understandably, without too much analysis.

The real gem of online Churchill resources is Churchill Archive, which links to Churchill Central and contains the digitised version of papers housed at the Churchill Archive Centre. Though available only by subscription, these papers have reached a much wider audience than previously thought possible, and a recent redesign has made searching for documents much easier. Well-known material, such as Churchill’s notes for his June 4th, 1940 speech – ‘We shall fight on the beaches … We shall never surrender’ – is itemised down to the individual folio (CHAR 9/140A/9-28), whereas lesser-known documents, such as his general correspondence from 1945 to 1964 (CHUR 2), reveal more than 620 sub-folders, many of which can contain over 200 individual folios.

Perhaps the most remarkable and ground- breaking online resource is Churchill Archives for Schools. This site is open access and schools may register for full access to the digitised papers, which will give teachers access to lesson plans, key questions and key documents, organised under major themes such as ‘key developments in modern British and Empire history’ and ‘Churchill: discussion, debate and controversy’. The site also boast the useful feature which, if you come across a less well-known personality and would like to know more, links to the online Dictionary of National Biography (Oxford University Press).

These online resources help us better understand Churchill’s vast and important role in British and world history and allow wider access to historical documents. This will surely help the re-evaluation of the way that not only students and the wider public learn about Churchill but also how historians engage with his legacy. For instance, scholars can now place Churchill in a broader contextual understanding of his own social and political world, allowing them to demonstrate Churchill’s global significance beyond Britain and Anglo-American relations. But, perhaps most importantly, these resources bring Churchill’s legacy to a new generation of thinkers, who will have access to history at the click of a mouse.

Warren Dockter is a Research Fellow at Clare Hall, University of Cambridge.