Arriving as Rebecca Rolfe in 1616, Pocahontas’ trip to London was used to raise support for Britain’s struggling colonies. 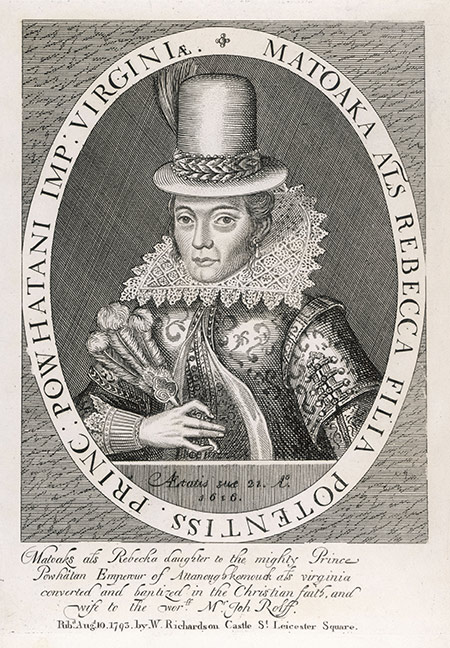 Four hundred years ago, Pocahontas arrived in England with her husband John Rolfe. Bold, vivacious and smart, her story has become mythologised, not least the supposed romance that developed between her and Captain John Smith after she saved his life, famously depicted in the 1995 Disney film. Historical inaccuracies did not spoil the film’s commercial success, nor the profits it earned from merchandising, but exploitation of Pocahontas had already begun during her short lifetime and her visit to England in 1616 was a part of it.

At this time, Rolfe was a successful tobacco farmer near Jamestown, Virginia, the first permanent English settlement in North America. Pocahontas was born around 1596, a daughter of Powhatan, chief of the Algonquian-speaking tribes and overlord of the vast Chesapeake lands. Powhatan played fast and loose with the settlers who, inexperienced and increasingly desperate, courted trouble. They had been sent by the Virginia Company, set up by charter from James I, to find a suitable site for settlement. In May 1607, 104 men and boys arrived on three ships under the command of Christopher Newport. Other notables included John Smith and George Percy, son of the 8th Earl of Northumberland.

It was not a promising start. The settlers were too reliant on the cooperation of the Indians. Smith was captured by Powhatan and thought he would be killed. Years later he said Pocahontas saved his life and, although his claim is now disputed, he was correct in saying she ‘preserv[ed] the Colonie from death, famine and utter confusion’. After a brief period of mutual goodwill, a gunpowder accident saw Smith leave Virginia in 1609 and the goodwill deteriorated. Percy wrote of men ‘destroyed with cruell diseases ... and by warres’, but most ‘died of meere famine’.

Rolfe was bringing supplies and settlers on Sea Venture when it was wrecked off Bermuda. Indeed, the hurricane that shipwrecked Rolfe is said to have inspired Shakespeare’s The Tempest, although, unlike his friend Ben Jonson, Shakespeare never met Pocahontas; he died six weeks before she arrived in London. By the time Rolfe arrived in Virginia in May 1610, 600 colonists had been reduced to fewer than 70 by famine, disease and skirmishes. The Anglo-Powhatan wars began. New governor Sir Thomas Dale oversaw the building of a new city, Henrico, where Rolfe began his farm. There he met Pocahontas, who was being held hostage by the English to encourage peace negotiations with her father. Living at the chaplain’s house, and already having learned English, she was taught to dress and behave as a lady and, crucially for England’s religious agenda, given Christian instruction.

Rolfe sought Dale’s consent to marry Pocahontas by letter during 1614, saying he was not led by ‘carnall affection: but for the good of this plantation [and] our countrie ... and for the converting to the true knowledge of God and Jesus Christ, an unbelieving creature’. Seeing the chance for peace, Dale and Powhatan approved. Pocahontas converted, taking the name Rebecca on baptism. The couple were married at Jamestown around April 5th, 1614.

News of the peace treaty and Pocahontas’ conversion were welcomed in England. The Bishop of London, Dr John King, was among those who fervently wanted a Protestant colony in the New World and saw their holy mission as converting the savages. However, the early problems had discouraged investors in the Virginia Company, which badly needed funds. A group of officers representing clergy and merchants received permission to hold lotteries and proposed plans for a religious school for the children of settlers and Algonquian Indians. When Dale suggested a visit by Pocahontas it was eagerly accepted. Her status as daughter of a chief would equate her with royalty and gain her entry into London society. Crucially, it might also encourage investment in the struggling Company.

With their son Thomas, born in 1615, the Rolfes left Virginia in May 1616 and arrived in Plymouth on June 3rd, with Dale and an entourage, including maids to emphasise Pocahontas’ importance. In London she is thought to have lodged at La Belle Sauvage in Ludgate Hill. The bishop hosted her; Samuel Purchas, rector of St Martin’s, was present: ‘Doctor King entertained her with festival state and pompe, beyond what I have seene in his hospitalitie afforded to other Ladies.’ She ‘accustome[d] her selfe to civilitie’ and ‘still carried her selfe as the Daughter of a King, and was accordingly respected [by] persons of Honor, in their hopefull zeale by her to advance Christianitie’.

Some saw artifice in the presentation. When society engraver Simon de Passe made her portrait, chronicler John Chamberlain wrote of it: ‘with her tricking up and high style and titles you might think her and her worshipfull husband to be somebody, if you did not know that the Virginia Company out of their povertie [only] allow her four pound a week for her maintenance’. Others were fascinated. Ben Jonson met her at an inn, referring to it in his play The Staple of News. It may have been at the Three Pigeons in Brentford, which Jonson frequented: the Rolfes had moved to Brentford to escape the London air, which gave Pocahontas respiratory problems. It was also where George Percy’s family owned the Syon estate. Smith wrote: ‘[H]earing shee was at Branford [Brentford] with divers of my friends, I went to see her’. It was a difficult meeting, for until they arrived in England she had believed him dead.

On Twelfth Night 1617 at the Banqueting House, Whitehall, Pocahontas attended Jonson’s masque The Vision of Delight and was received by royalty. Chamberlain observed: ‘The Virginian woman Pocahontas, with her father’s Counsellor hath been with the King, and graciously used’. Tradition has it they also visited Heacham in Norfolk, where Rolfe’s family lived, before setting sail in March 1617 for Virginia. Returning was ‘sore against her will’, but Rolfe was now secretary to the colony.

None of Pocahontas’ views were directly recorded but her wish to stay in England was fulfilled in tragic circumstances. At Gravesend she was taken ill and died on March 21st, aged 20, possibly from tuberculosis. She was buried in St George’s Church. Her husband, fearing for sickly Thomas, left him to be raised in England. Rolfe died in Virginia in March 1622 shortly before a massacre: the peace had been short-lived. Thomas later settled there and had children.

Regarded by many as the mother of modern America, attempts have been made to find her remains and take them home. She could not prevent the impact of colonisation on her people. Her tribe, the Pamunkey, was only finally recognised by the US government in 2015.

Pocahontas continues to hold our interest, though it is important to note that, in accounts of her voyage to her own ‘brave new world’, a crucial voice is missing: her own.

Jane Dismore is a freelance journalist and biographer.