One in every four soldiers surrendered at some point during the American Civil War. It was an honourable way of accepting defeat – provided it was done under the right circumstances. 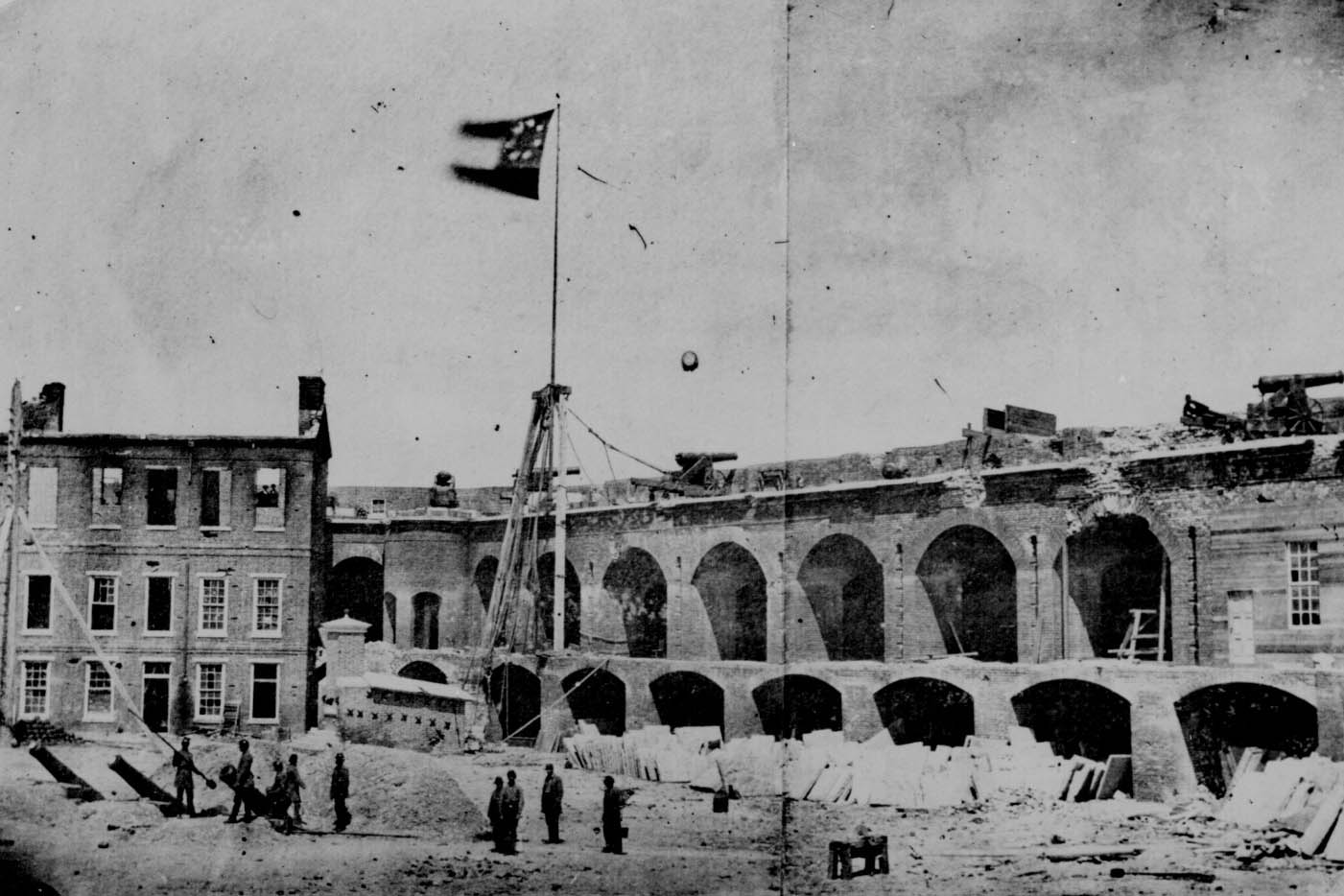 Major Robert Anderson never expected to become the first hero of the American Civil War. On 19 April 1861, he stood on board the USS Baltic as it steamed into New York Harbor, escorted by a fleet of ships cheering their arrival. On board was the garrison of Fort Sumter, which Anderson had surrendered to Confederate forces a few days earlier. Since December 1860, when South Carolina seceded from the Union, Anderson’s small garrison had been in a state of crisis, with diminishing supplies and unclear guidance from Washington. Anderson had refused Confederate General Pierre G.T. Beauregard’s initial demand for surrender on 11 April, but after 34 hours of bombardment and with the fort on fire, Anderson raised the white flag. Having secured the fort, Confederate officials granted Anderson and his men safe passage.

During the voyage north, they had no idea what kind of reception they would receive when they arrived in New York. To their surprise, they ‘were received with unbounded enthusiasm’. To honour Anderson and his men, the city held an enormous rally in Union Square, an event which would have been appropriate for a victorious general. More than 100,000 New Yorkers (the New York Times reported it as ‘the entire population of the city’) flooded the park and the surrounding streets. Anderson was praised by a series of orators as a ‘gallant commander’, ‘the Hero of Fort Sumter’, who had survived ‘the smoke and flame’. Praise for Anderson was not restricted to the North. The Richmond Daily Examiner heaped ‘the highest honour and credit on the gallant Major in command and the noble band of heroes that so faithfully served under him’.  For his part, Robert Anderson seemed somewhat embarrassed by the whole affair. A career military man, he had never sought the spotlight. 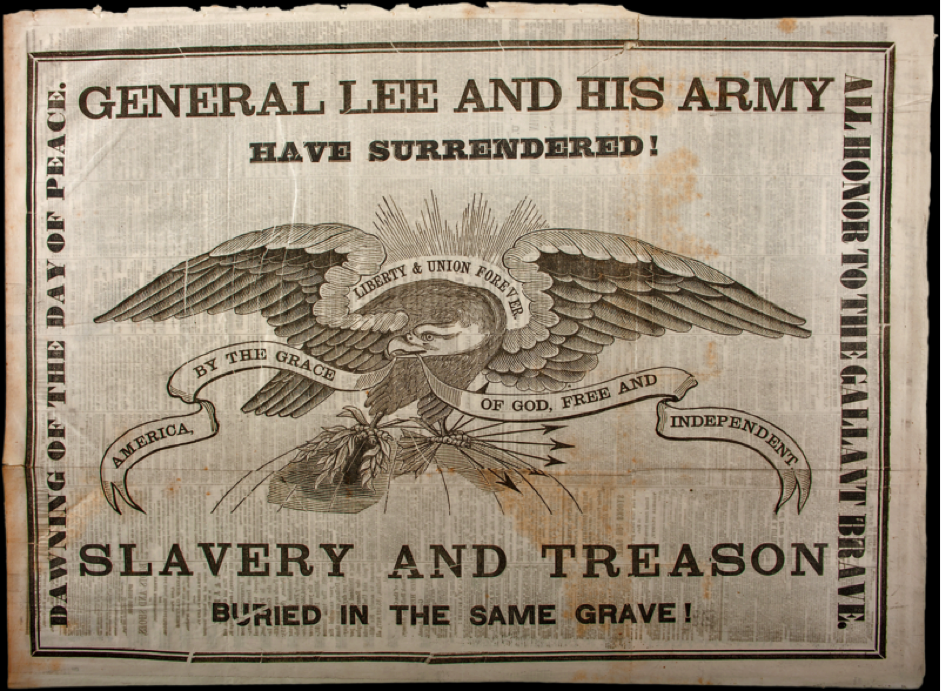 If Robert Anderson’s surrender at Fort Sumter in April 1861 has traditionally marked the start of the American Civil War, Confederate General Robert E. Lee’s surrender to Union General Ulysses S. Grant at Appomattox Courthouse in April 1865 is often cited as its end (though in reality it was only the first in a series of surrenders that signaled Confederate defeat). Between Fort Sumter and Appomattox Courthouse, both Union and Confederate forces surrendered on dozens of occasions, including some of the decisive battles of the war: Fort Donelson, Harpers Ferry and Vicksburg. In the largest of these surrenders, soldiers numbering in the thousands laid down their arms. In nearly every Civil War battle, soldiers – individually and in small groups – found themselves in a position where choosing not to fight appeared to be their only option, and threw up their arms in surrender.

One of the reasons why surrender proved so ubiquitous was that both Union and Confederate officers had a clear, shared understanding of when one could do it honourably, a rubric demonstrated during Robert Anderson’s surrender at Fort Sumter. When under fire, one could surrender honourably once it became evident that continuing to fight would prove fruitless.

This remained the standard throughout the war, even to the very end. For instance, in May 1865 – more than a month after Lee’s surrender at Appomattox, after the surrender of other Confederate armies under generals Joseph Johnston, Richard Taylor and Jeff Thompson, after the capture of Confederate President Jefferson Davis – the Union army sent a courier to General Edmund Kirby Smith asking if he’d like to surrender the last major Confederate force in the field. The Commander of Department of the Trans-Mississippi, Kirby Smith had been isolated from the rest of the Confederacy since the fall of Vicksburg two years earlier. Yet, he said that he could not surrender, writing in a lengthy reply that ‘an officer can honorably surrender his command when he has resisted to the utmost of his power, and no hopes rest upon his further efforts’. Kirby Smith was not any under illusion that the Confederacy would rise again or that he could defend himself against a Union invasion of the Trans-Mississippi, but concluded that he could not surrender until the circumstances forced his hand.

While most surrenders during the American Civil War met this standard, on a few occasions officers surrendered prematurely or without cause. When Union Colonel Dixon Miles surrendered Harpers Ferry to Confederate General Stonewall Jackson in September 1862, many of his soldiers believed that they had not been given adequate opportunity to fight. One soldier recalled that ‘the indignation of Union men and officers at the surrender was terrible – some sobbed like children, some swore, some were angry beyond words’. Another noted that ‘I have never seen ten thousand men all terribly angry in my life but this once’. Northern newspapers and a congressional investigation concluded that Miles acted out of cowardice rather than discretion, such that ‘Colonel Miles’ incapacity, amounting to almost imbecility, led to the shameful surrender of this important post.’ Harpers Ferry proved to be the Union’s largest surrender in the Civil War, with more than 12,000 soldiers laying down their arms. Ironically, Dixon Miles didn’t survive to hear his name raked through the mud: at the moment he ordered the surrender, Miles was hit by a fragment from an artillery shell and died shortly after. 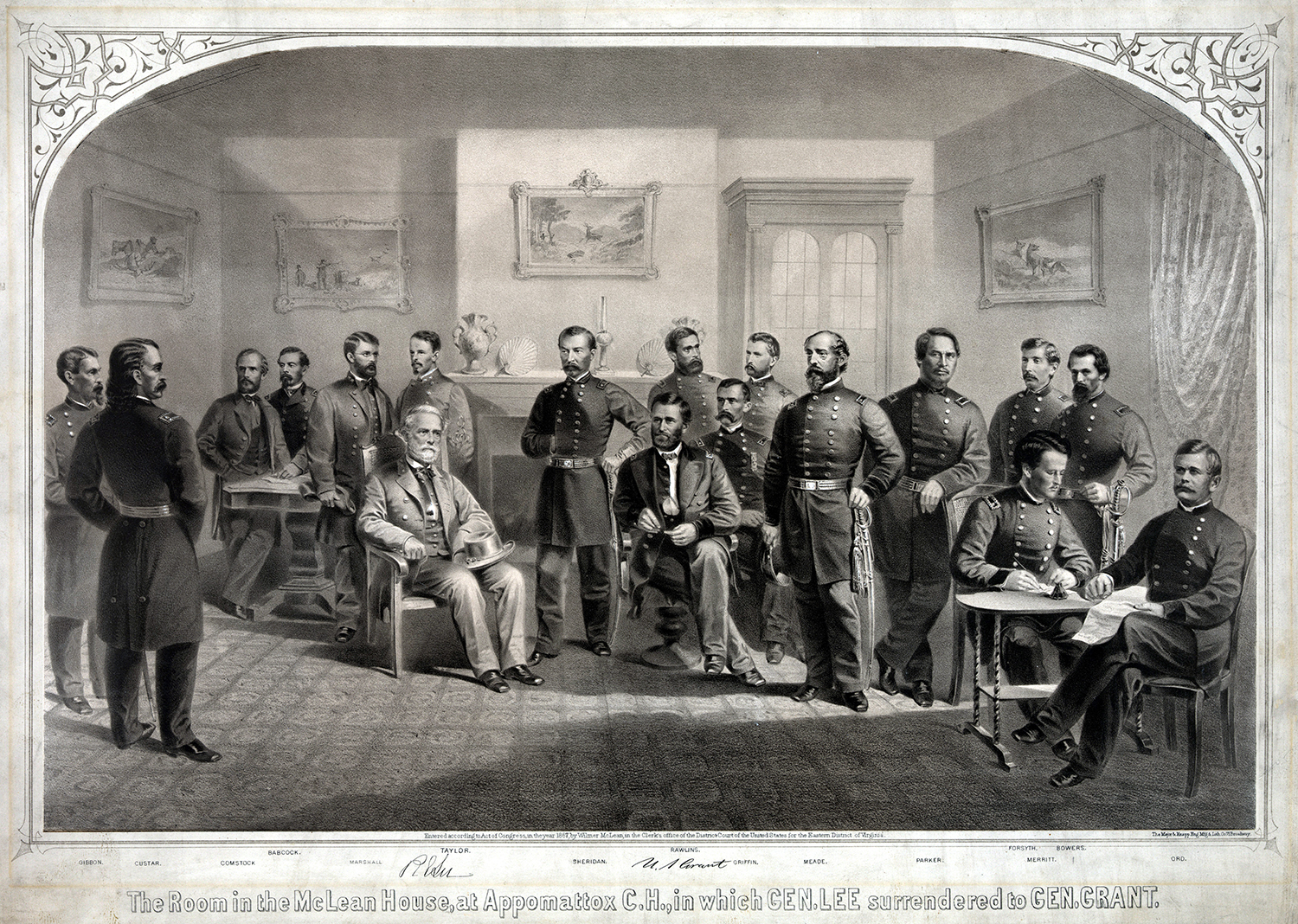 Surrender factored heavily in the war’s conclusion and shaped its aftermath. Having won re-election in November 1864, Abraham Lincoln saw Confederate surrender as a route to peace after the deadliest year of the war. Lincoln encouraged his generals to offer generous terms, hoping that this would entice Confederates to lay down their arms. ‘Let them surrender and go home,’ Lincoln told them:

they will not take up arms again. Let them all go, officers and all, let them have them have their horses to plow with and, if you like, their guns to shoot crows with … Give them the most liberal and honorable of terms.

Confederate soldiers would be immediately paroled and allowed to return home. They would be given rations and in some cases transportation. They would not go to prison and would not be prosecuted for treason. Surrender would be the way to end the war quickly and with the least amount of bloodshed.

While Lincoln wanted to entice Confederate officers and armies to surrender, he instructed his generals not to allow the Confederacy itself to surrender. From the beginning of the Civil War, the Lincoln administration held that secession was unconstitutional and the Confederate government illegitimate. Lincoln himself often referred to it as the ‘so-called Confederacy’ and took pains to avoid recognising it as a rival nation. He worried that if the Union accepted the surrender of the Confederacy’s political leaders, it would retroactively grant the government some standing. To recognise its death would in effect recognise its life. For his part, Confederate President Jefferson Davis also agreed that the Confederacy could not surrender. The Confederate Constitution, he argued, granted him considerable power, but it did not allow him to end its life through surrender. Consequentially, the American Civil War did not end with one massive surrender, but with the surrender of individual Confederate commands. 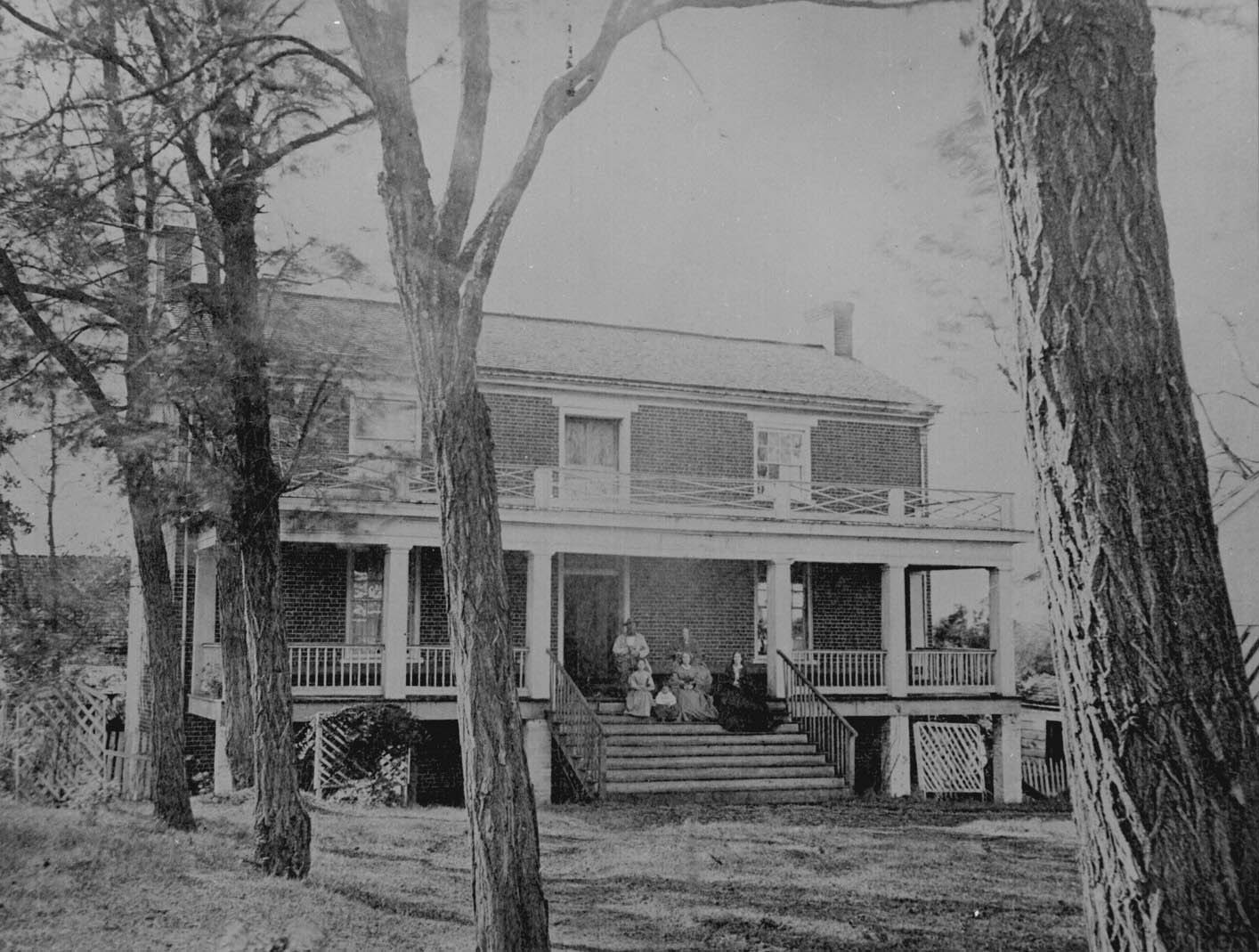 Although displeased with the war’s results, most Confederate soldiers believed that the Union offered generous terms and were eager to return to civilian life. However, not all Confederates were willing to accept that the war was ending. At Appomattox Courthouse and in the surrenders that followed, some men decided not to accept their commander’s decision and left hoping to join another Confederate army. When Kirby Smith finally surrendered, some of his soldiers marched into Mexico rather than accept defeat. Many of these men who refused to accept surrender at the end of the war continued to resist the federal government in the years that followed, becoming the founding members of paramilitary organisations such as the Ku Klux Klan during Reconstruction.

Robert Anderson’s Civil War ended in April 1865 when he was asked to return to Fort Sumter to commemorate four years since his surrender. The Union had recently gained control of the city and was on the verge of defeating the Confederacy. The night before Anderson was scheduled to participate in a grand ceremony in the fort’s ruins, news reached Charleston of Lee’s surrender at Appomattox Courthouse, prompting celebrations that lasted late into the night. The next morning, Anderson and other notables boarded vessels that ferried them to Fort Sumter, with grandstands decked in patriotic bunting. A New York Times correspondent noted that four years earlier ‘our national ensign, floating in its pride and power over the battlements of Fort Sumter, was assailed and trailed in surrender’. Today ‘the identical flag that was lowered in humiliation, was raised with appropriate ceremonies’. When the cheering subsided, Anderson said that he ‘was here to fulfill the cherished wish of my heart through four long, long years of bloody war, to restore to its proper place this dear flag’.

David Silkenat is the author of Raising the White Flag: How Surrender Defined the American Civil War (University of North Carolina Press, 2019). 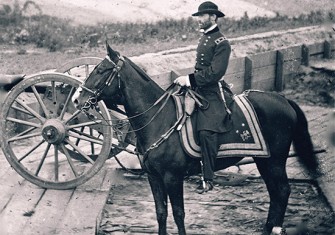 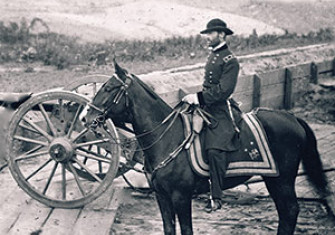