The Many Faces of the Enlightened Man

In the 18th century, new scientific ideas meant new thinking about what it meant to be male and female. As everything became gendered, anxieties proliferated. 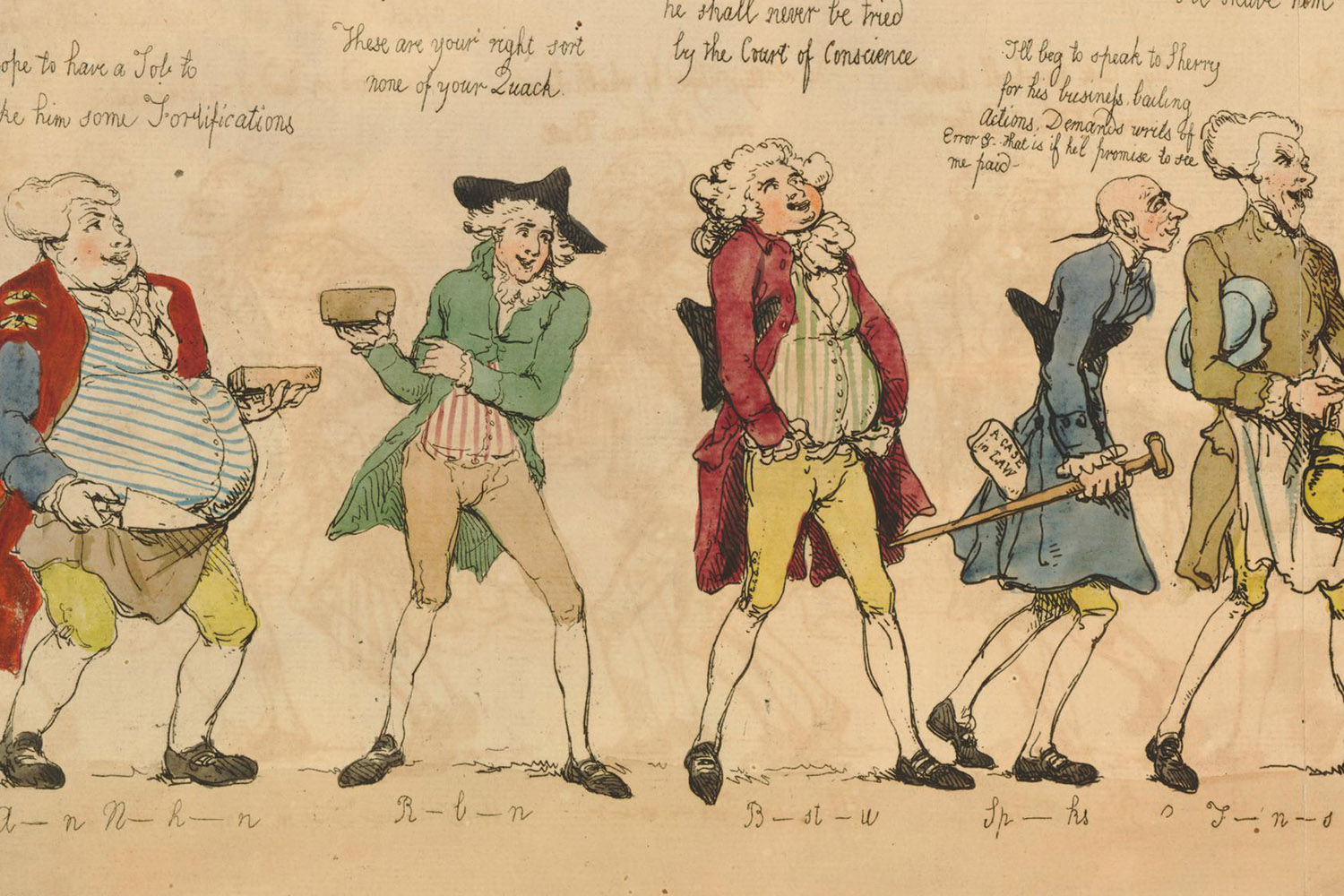 The Rochester address or the corporation going to eat roast pork and oysters with the r-g-t, by Thomas Rowlandson, 1789.

On a Monday in 1666, the London diarist Samuel Pepys had a shave. ‘Lord!’, his notebook exclaimed, ‘how ugly I was yesterday and how fine to-day!’

After the bushy beards of the Protestant Reformation, being clean-shaven had become the marker of a man of note. This vexed Pepys. Over the years he tried to tackle the interminable task by visiting a barber, having the barber come to his home and even shaving himself. First, he tried a pumice stone. While ‘easy, speedy, and cleanly’ at the beginning, it wasn’t better than a barber. Then came the razor, but that too had its pitfalls: ‘I have cut myself much, but I think it is from the bluntness of the razor’.

While a seemingly simple chore, the number of objects required to shave reveals how cumbersome a job it was. Razor, soap and shaving brush, of course, but Pepys would have also needed a leather strop to keep the razor sharp, an expensive mirror, water to be collected and heated over a fire, linen to be regularly laundered and candles for an evening trim. Money was needed to buy the kit and to pay the servants or the barber. Predictably, wealth and social standing were inextricably linked. Shaving was an amenity for the moneyed and a marker of a ‘Polite Gentleman’. 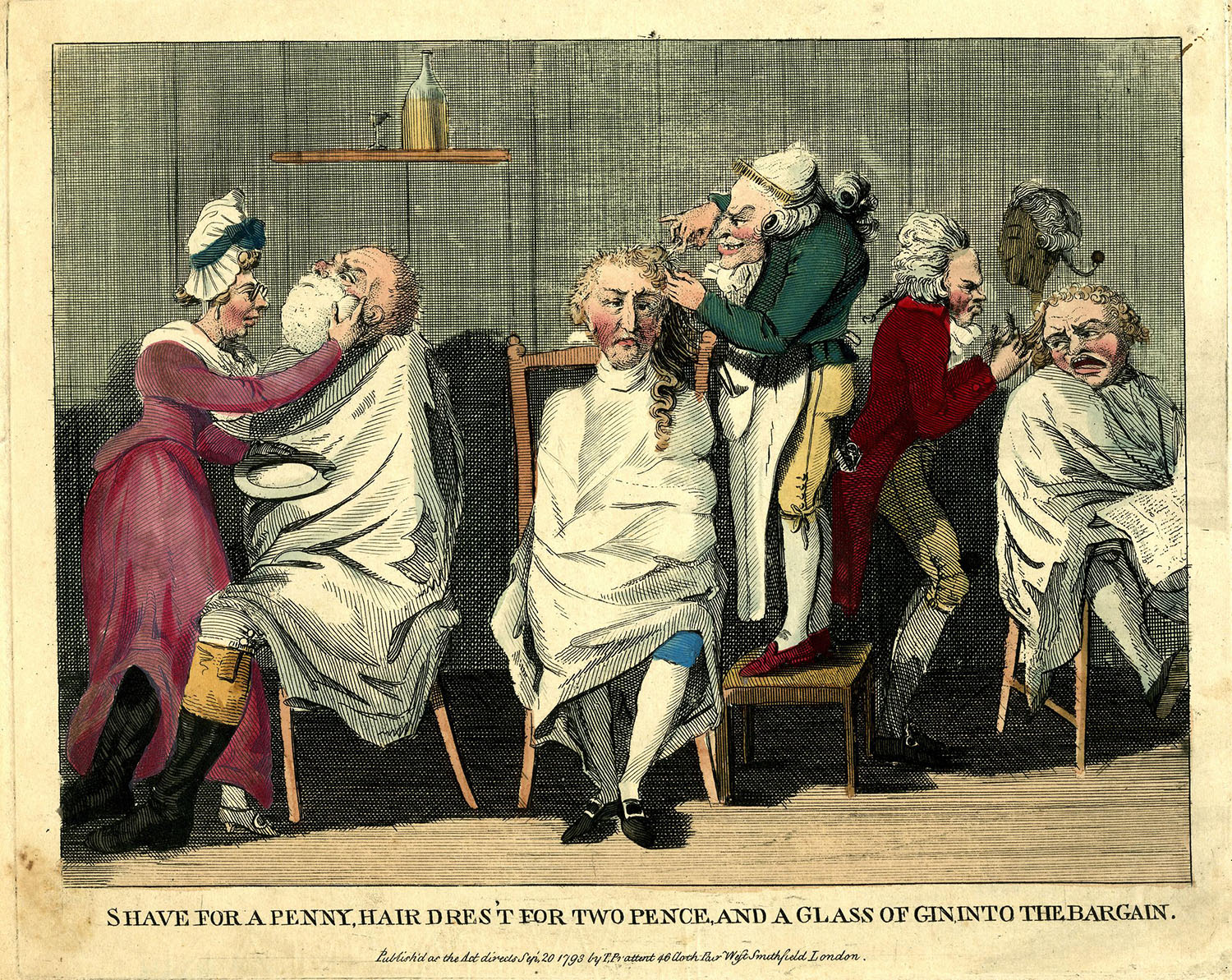 The ‘Polite Gentleman’ was an archetype against which men could position themselves. It was, like the ‘Household Patriarch’ before it, the dominant masculine norm to which most men aspired. It dictated the mainstream male fashion, which is why Pepys kept himself beardless and periwigged. Adhering to this fashion was the easiest way of getting by. In the 18th-century, under the yoke of this dominant norm, were other social types, from the ultra-masculine rake at one end, to the effeminate fops and mollies at the other. All of them were positioned along the traditional opposition: the way to be a man was to not be a woman.

In Georgian London, ‘His’ and ‘Her’ objects took off as a craze: from writing desks to dressing tables. Masculinity was performed through the purchase and possession of certain items. The aesthetic responded to the perceived function: men were meant to write intellectual letters, whereas women were meant to write letters of leisure. Manufacturers capitalised on these preconceived ideas: men were supposed to be strong, so their furniture was designed to be large, heavy and commanding; women were supposed to be dainty, so received small, curvaceous and fiddly designs. Advertisers played up the differences and into people’s fears: how embarrassing for an aspiring Polite Gentleman to be found writing, not at a right-angled, dark mahogany desk, but at an undersized lady’s table.

However, following fashion too fastidiously could also be humiliating. By the 18th century, some particularly opulent shaving sets had combs, nail files, mirrors, scissors and straight razors, all made of tortoiseshell and fine silver. Men could undoubtedly be inveigled by beauty, but over-expense might have appeared un-stoic, indulgent – even foppish. 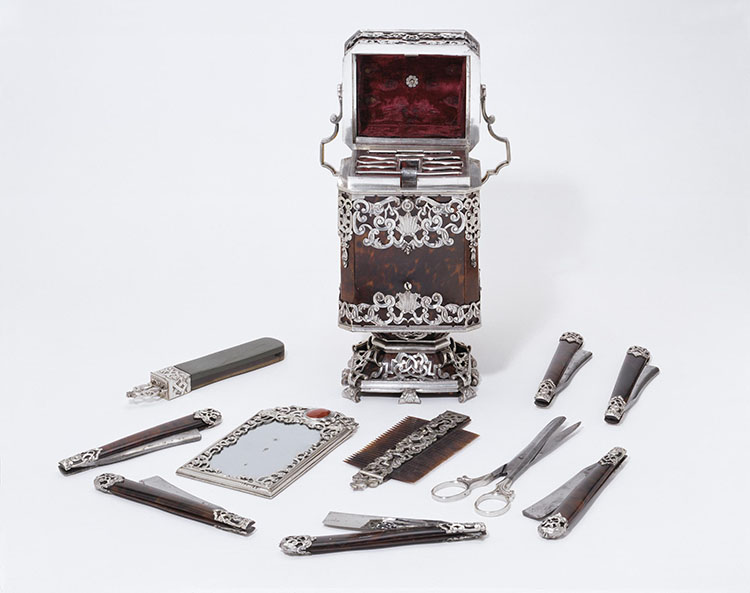 The hopeful Polite Gentleman had to tread a careful line, following fashion in a way in which his masculinity was emphasised but not affected by the effeminacy of women. Ensconced in questions of sexuality, the term ‘effeminate’ is problematic. In the 17th century it referred both to men who were ‘like’ women, and therefore enjoyed sodomy or transvestism, as well as to men who liked women too much, and became sexually obsessed.

An 18th-century ‘fop’, originally meaning a fool, came to represent the effeminate man who emulated women. Their epicenity could be total, from clothing to conversation and intonation. The fop’s preoccupation with his appearance would be matched later in the century by the ‘macaronis’: young men who returned from their Grand Tours in Europe having tasted macaroni for the first time. Exaggerating continental fashion, they wore outlandish clothing, such as gargantuan, powdered wigs with tiny hats on top.

A ‘molly’ was the term for a homosexual man. It most likely stemmed from the Latin ‘mollis’, which meant soft and connoted a passive, effeminate homosexual. Because sodomy was a capital offence, Molly-houses sprung up as marginalised meeting places where cross-dressing, homosexuality and occasional mock-birth rituals could be enjoyed. Although this ‘lying-in’ ceremony was immortalised by salacious reporters, evidence pops up throughout the century of men at masquerades, perhaps as part of folk nature festivals, pretending to be women giving birth.

The libertine ‘rake’, celebrated in the Restoration court and epitomised by the notorious Earl of Rochester, was the term for the sexually profligate. Though they ultimately became the butt of 18th-century jokes about venereal disease and insanity, rakes subversively supported the dominant masculine norm by upholding patriarchal structures.

These frantically discussed male identities exemplify the 18th-century anxiety over what it meant to be a man. A key reason for this anxiety was a change in the way in which the human body was viewed. For millennia the ‘one-sex’ model had prevailed. Recorded by Galen, a second-century Roman physician, the theory concluded that women were essentially under-developed men. Men’s genitals were women’s turned inside out: like a flower, the ovaries would turn out and turn into testes; the vagina would bloom into a penis. As the 18th-century Enlightenment drove experimental science, a ‘two-sex’ model with two sets of separate genitalia was becoming accepted. Suddenly, anatomies were distinct and so, rather than men and women being virtually the same, even fluid, basic bodily processes became gendered. Enlightenment men then sought to define what their sex was. 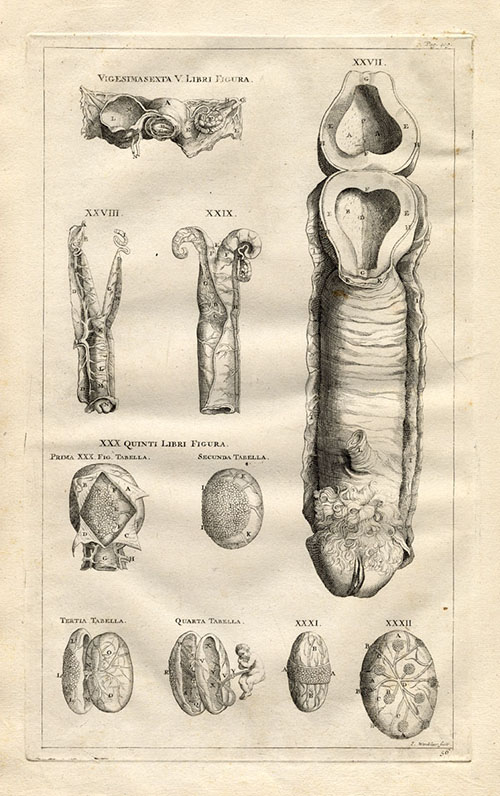 More than ever, masculinity was expressed through control. Linking new medical knowledge and global imperialism, ‘Merryland’ stories formed a genre of 18th-century erotic fiction that took its name from a pun on the American state of Maryland. The female body was depicted as a foreign land with its own customs, language and commodities, that men ought to explore, reap and plough. In this fantasy, women’s invariably latent sexual desire was unlocked at the invitation of men; their pleasure the achievement of male prowess; their bodies the objects of male discovery. The way to be a man was to be different from, and in charge of, a woman.

Proving your masculinity, however, was done between men. In taverns, rambunctious male drinking culture was ubiquitous. In coffeehouses, men read news, politics, culture and even erotica aloud while conducting business and getting drunk. As well as looking the part, the Polite Gentleman was meant to be able to intellectually engage in the public arena. The hallmark of enlightenment masculinity was reason. Often, this meant being distinct from emotionally attuned, yet intellectually deficient, women and their associated marginalised men, but also simply showing off to other Polite Gentlemen. Exclusive clubs, formed in the name of almost anything conceivable, were the height of male sociability. They were places to learn enlightenment wisdom, climb the social ladder and, as the famous man of letters Samuel Johnson put it, pontificate among ‘an assembly of good fellows’. 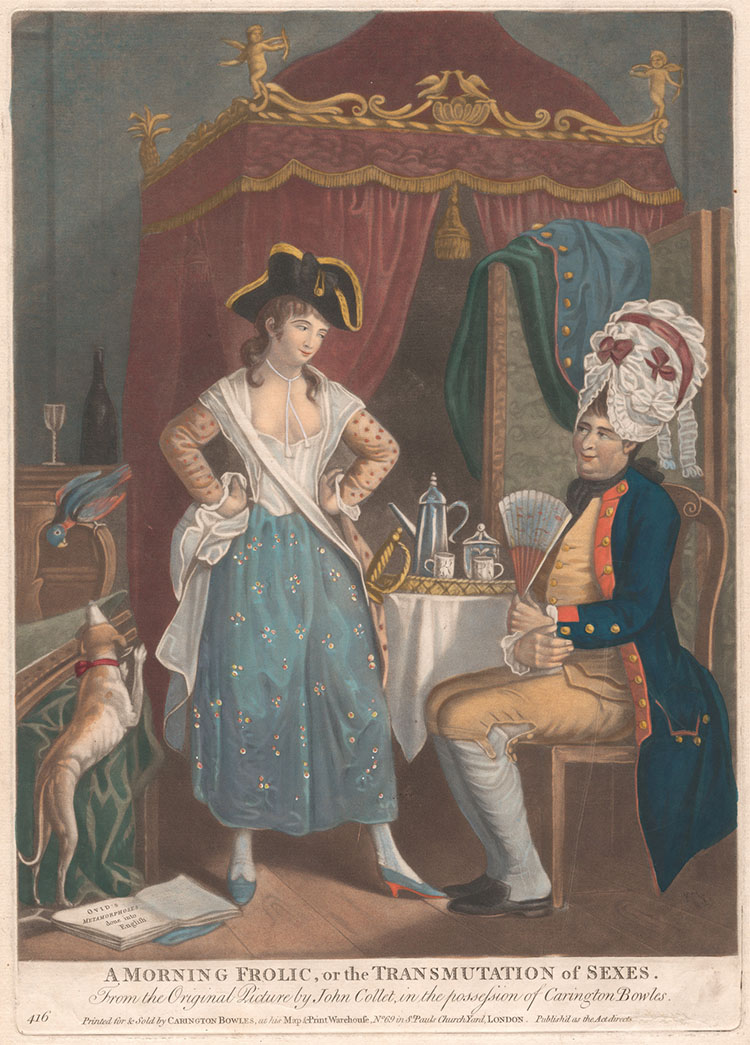 In these private spaces, rules were blurred. Polite Gentlemen used enlightenment language to justify sexual curiosity. Hellfire Clubs were the most infamous ostensibly polite clubs, known for their debauchery and promiscuity. The Beggar’s Benison Club was founded in Scotland to campaign for free trade but dedicated much of its time to exploring sex. ‘One Feminine Gender, 17, was hired for One Sovereign’, the society’s private records report. Like a curious exotic flower or animal, members inspected her naked body: ‘None was permitted to speak or touch her. She spread [her legs] wide upon a seat, first before and then behind’. For these men, masculinity was wrapped up in enlightenment notions of the conquest of nature and the creation and categorisation of knowledge.

How to be a man was clearly a perplexing question as male identities did not always fit into neat categories: men ranged from the powerful to the powerless; and those negotiating changing social norms to those taking advantage of them. Nevertheless, they all positioned what it meant to be a man against their perception of women. It is a reminder that there is often little gain in examining genders in isolation; masculinity and femininity have always been inextricably intertwined. In any event, if an 18th-century man did want to make his way, whether as ruler, rake or rebel, he had better raise a razor.

Jack Dykstra is completing a PhD in Early Modern History at the University of Cambridge.