Lily of Liberty: Amelia Bloomer at 200

With her newspaper, The Lily, Amelia Bloomer changed how American women thought about themselves; with her popularisation of the bloomer, she changed how they dressed. Her progressive thinking remains relevant in her bicentenary year. 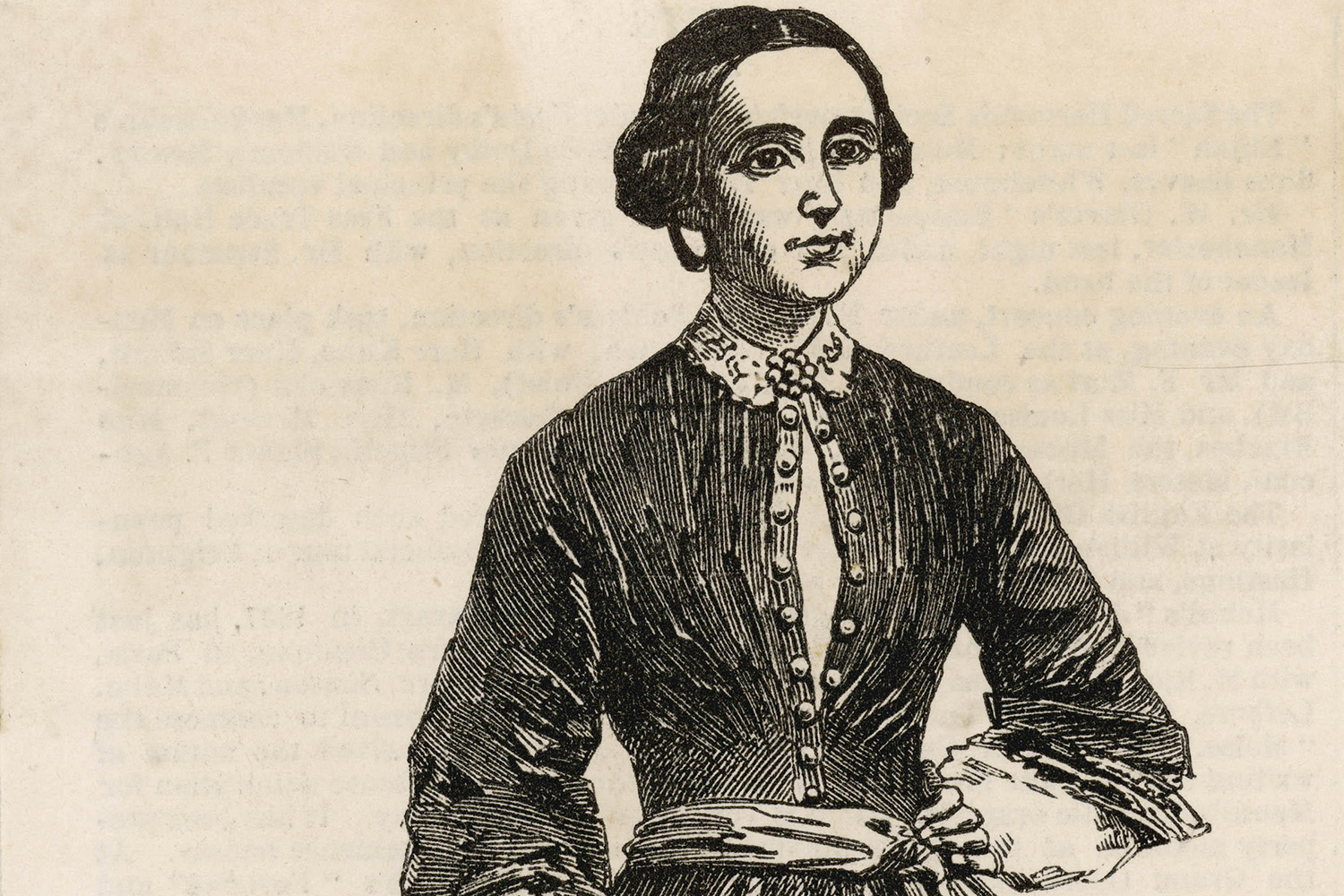 On 1 January 1849, the world’s first newspaper solely dedicated to – and edited by – women was launched in the United States. Called The Lily, its front page boldly read: ‘Published by a committee of ladies’.

It proudly boasted an unambiguous manifesto: ‘It is WOMAN that speaks through the LILY. It is upon an important subject, too, that she comes before the public to be heard.’ The woman behind the groundbreaking new publication was Amelia Bloomer, who, over the course of the next four years, oversaw and published the paper with a team of contributors. An eminent figure in the US suffrage movement, Bloomer was a progressive thinker, promoting change – both political and sartorial – some decades before feminist campaigns gained universal momentum at the turn of the century.

Throughout the 19th century, in different US states, the quest for social and political reform for women had worked towards the achievement of various goals, yet, as the century wore on, they gradually began to unite to focus on women’s suffrage. In the late 1860s, two distinct groups formed: the American Woman Suffrage Association (AWSA) and the National Woman Suffrage Associations (NWSA). They would unite in 1890 to become the National American Woman Suffrage Association, led by Elizabeth Stanton and Susan B. Anthony. For the next two decades the association worked state-by-state to grant women the vote. Four states, Wyoming, Colorado, Utah and Idaho, had granted women’s suffrage before the turn of the century. Gradually, others followed suit until, in 1919, Congress and Senate passed a national vote of suffrage. In 1920, the 19th Amendment – prohibiting states from denying anyone the right to vote based on their sex – was ratified. But this would not have been achieved without the grassroots work of activists like Amelia Bloomer.

Born Amelia Jenks in New York City 200 years ago on 27 May 1818, her early life was fairly ordinary. She received a limited education at a local public school and, in her teens, held jobs as both a teacher and a governess. It was only when she met and married Dexter Bloomer that she was inspired to enact change. Dexter was the editor and co-owner of a local newspaper, Seneca Falls County Courier, and after their marriage she moved upstate to Seneca, New York. There, she immersed herself in the church community and actively participated in local organisations. With her husband’s encouragement, she began to write. 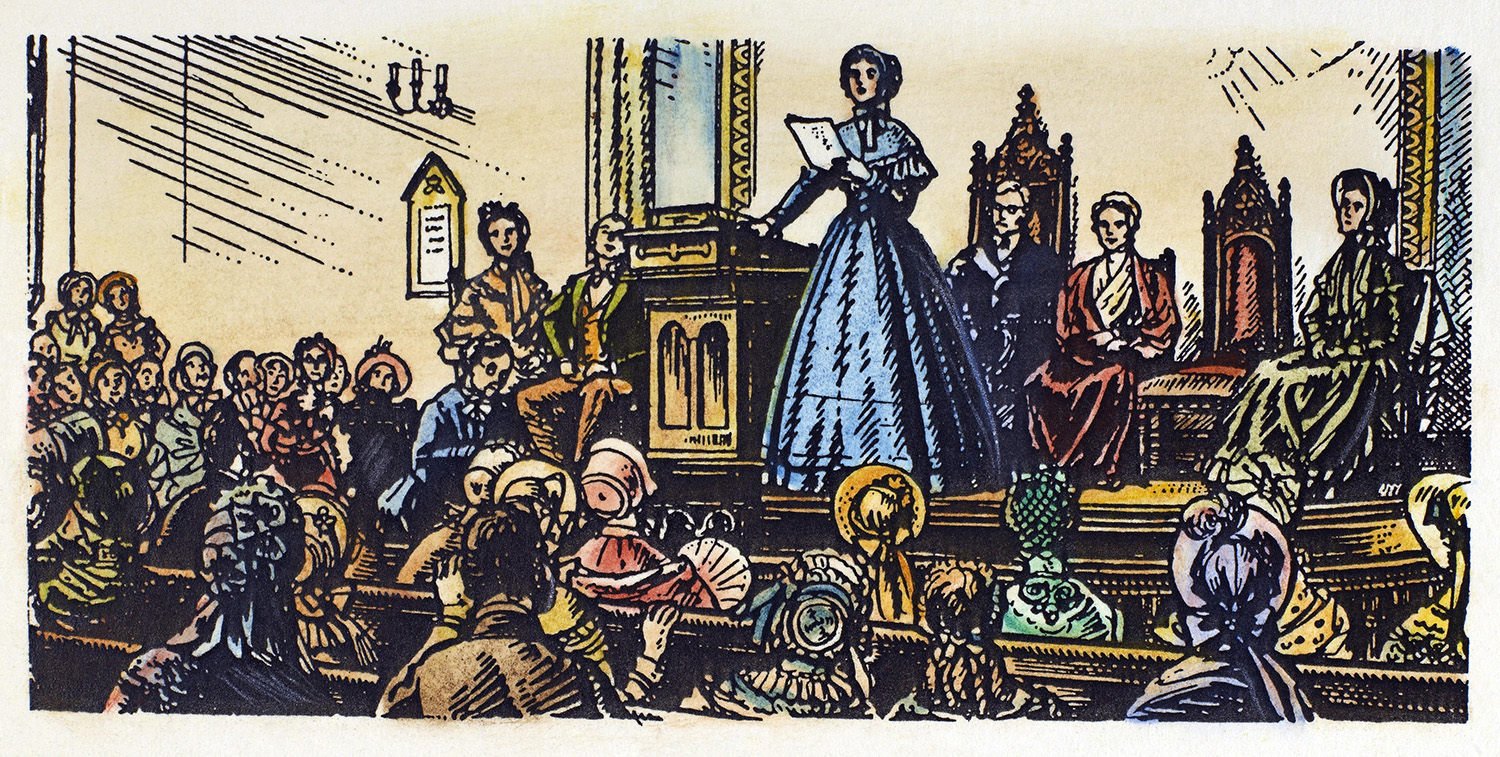 In 1848, Amelia Bloomer attended the First Women’s Rights Convention in America, held in Seneca Falls, New York. It was organised by Elizabeth Cady Stanton, a leading figure of the early suffrage movement, whose Declaration of Sentiments, presented at this rally, was to initiate widespread attention and campaigns. The speech was written up and published in the North Star Printing Office, which was owned by former slave and social reformer, Frederick Douglass. The report offered a scathing attack on man:

The history of mankind is a history of repeated injuries and usurpations on the part of man toward woman ... To prove this, let facts be submitted to a candid world.

He has never permitted her to exercise her inalienable right to the elective franchise.

He has compelled her to submit to laws, in the formation of which she had no voice.

He has withheld from her rights which are given to the most ignorant and degraded men – both natives and foreigners.

He has made her, if married, in the eye of the law, civilly dead.

The list of charges carried on in this vein, arguing that man’s treatment and placement of woman in her domestic sphere was a social and a religious degradation, betraying the authority of God.

Although Bloomer had previously published columns advocating temperance and women’s rights, the convention and its furious legacy inspired in her what would become a lifelong passion and dedication to female suffrage and wellbeing. Within a year of the event, inspired by her allies, Bloomer founded The Lily. 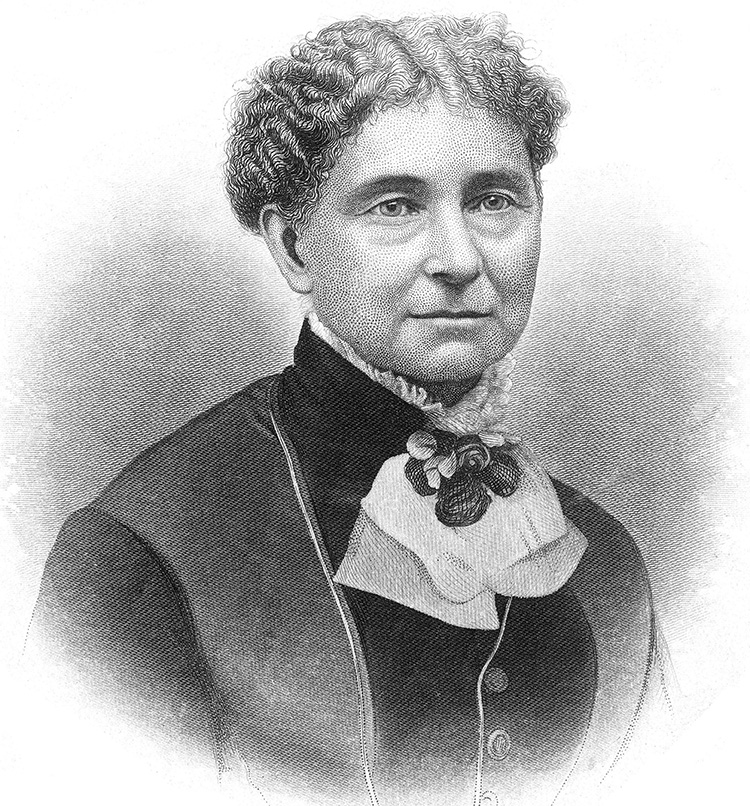 While, initially, temperance was the newspaper’s key focus, it soon moved on to the liberation of women and reforming their role in society. Articles ranged from practical advice to discursive features. An article from 1854, for example, ‘Do Women Ever Do Any Hard Work?’, by an anonymous contributor, championed the working-class female attitude to work:

Go into the towns, and there you will see them serving customers in all kinds of stores – attending to, working at, and carrying on all kinds of trades, sorting and packing up all sorts of goods in factories and warehouses; they do all kinds of weaving, dyeing, knitting, spinning, and sewing of all kinds of articles in use; they work at the shoe trade, and not a hat made but they have a hand at it; some you will find, keep Post offices, teach school, and preach the gospel; others employ their time in doctoring, nursing and attending on the sick; some you will find in Bake-houses, making bread and various other things made in such places; and in butcher’s shops I have seen them cut up carcasses equal to men, and for Barbers they can’t be beat. Others go out washing clothes, and brewing beer all day long, and which are very different operations to anything you see done here; besides a great many of them have to attend to their own house affairs as well; so that woman’s work is said to be never done; and now tell me, if women don’t work hard, who does?

In addition to articles that lobbied for women’s fair treatment and respect, were those reappraising women in history. One such anonymous article is titled ‘Lieutenant Madame Brulon: A Modern Heroine’, and tells the story of a French woman who, upon learning of her husband’s death in the Napoleonic Wars, took his uniform and vowed to avenge him. She went to battle, fighting in Corsica disguised as a man and continued to fight after her identity was exposed, leaving the army with the promotion of lieutenant. The Lily writes:

Her testimonials prove her to have been always a woman of the severest principles, the purest manners, the most unsullied reputation. Her reply to trifling familiarity was, ‘I am a woman, but I command men.’

Despite writing and commissioning a wide range of articles, Bloomer’s passionate plea for dress reform would prove the most enduring aspect of her legacy. After noticing the restrictive and hazardous implications of corsets and dresses, she promoted a new style of garment: the pantaloons, now known as bloomers.

In 1851, Bloomer wrote about how she had adopted the new style of clothing, printing a description of her dress and instructions on how to make it. By June 1851, media outlets were calling it the Bloomer dress and throughout the 1850s it was all the rage. Bound into the idea of women’s liberation and known as ‘the freedom dress’, bloomers were adopted by many suffrage campaigners. 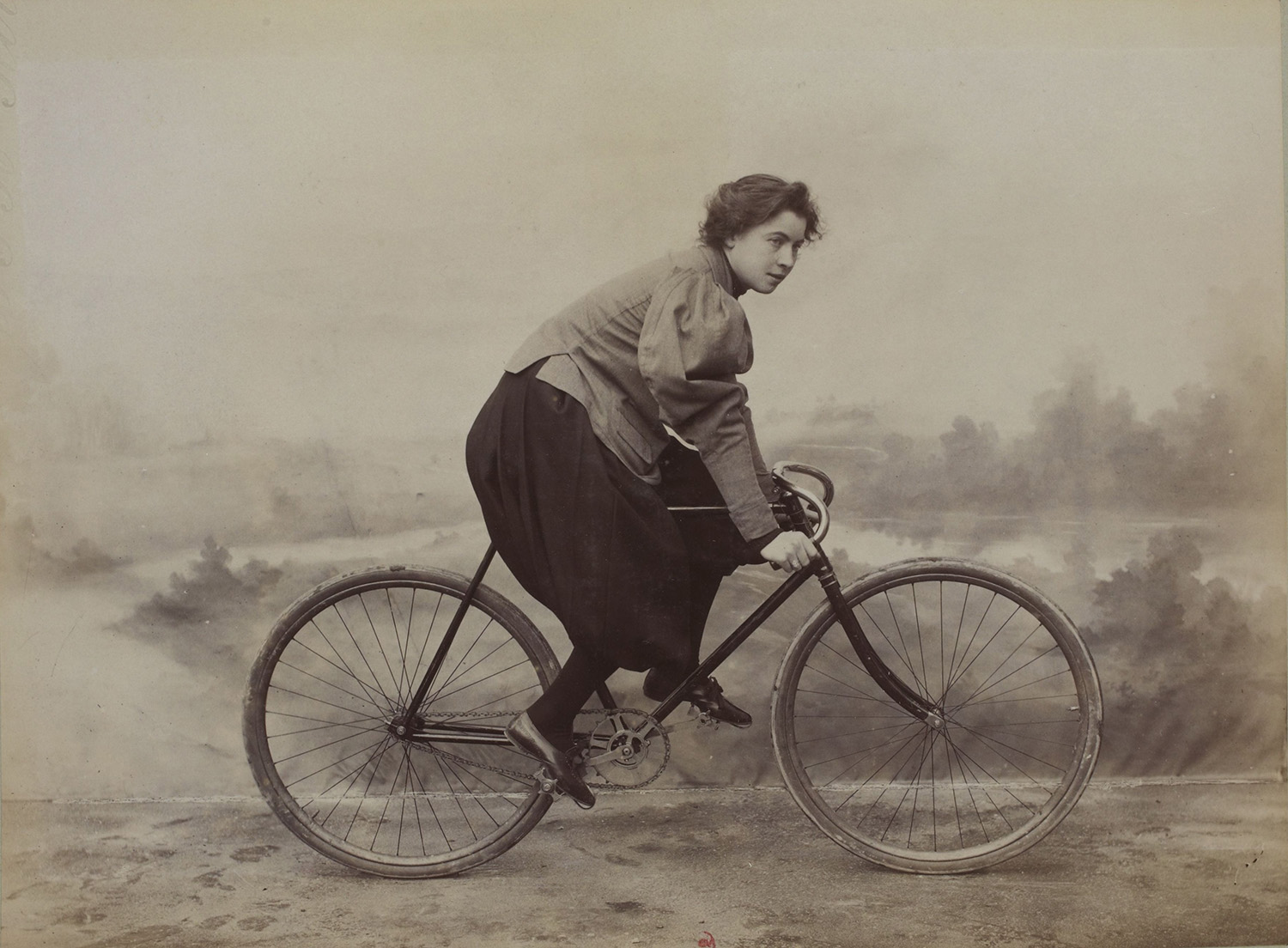 Unsurprisingly, this provoked widespread controversy; for many, the bloomer dress was an unfeminine and unsightly garment. During the American Civil War, nurses were banned from wearing it, although, due to the freedom of movement it afforded them, many chose to ignore this rule and wore it both in the field and in military hospitals. Popularity of the bloomer dress waned in the latter half of the 19th century, but it would resurface in the 1890s, becoming a fin-de-siècle symbol of the bicycle-riding, masculine new woman who threatened emasculation and world dominance.

Due to her work on The Lily, by the mid-1850s Bloomer was one of America’s leading suffrage activists. She was instrumental in the meeting of Elizabeth Cady Stanton with Susan B. Anthony, whom she introduced in 1851. The three met on a street corner in Seneca Falls, and Anthony immediately warmed to Stanton. Later, she recalled:

There she stood with her good earnest face and genial smile, dressed in gray silk, hat and all the same color, relieved with pale blue ribbons, the perfection of neatness and sobriety. I liked her thoroughly, and why I did not at once invite her home with me to dinner, I do not know. 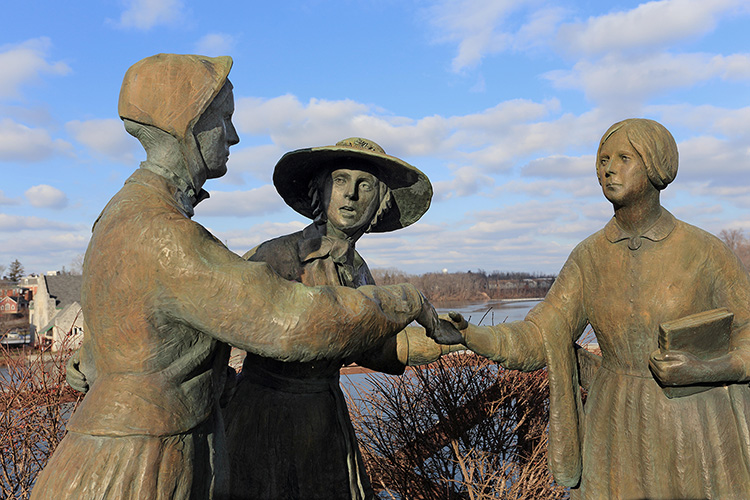 In 1854, Bloomer sold The Lily and moved west with her husband, where she continued lecturing about temperance and women’s suffrage in various towns. Eventually, they settled in Council Bluff, Iowa. She continued to strive for the good of society, preaching that women should become property owners, establishing the Soldier’s Aid Society of Council Bluffs to help Union soldiers and serving as President of the Iowa Suffrage Association between 1871 and 1873. She is largely credited with helping women get the vote in Ohio in 1873.

Amelia Bloomer died on 30 December 1894. Despite the impact of her life's work, her story is often eclipsed by her other global sisters, both suffragist and suffragette. Her legacy, however, has been commemorated. Her house in Seneca Falls is listed on the National Register of Historic Places and a statue of her introducing Stanton and Anthony was erected on that street corner in 1999. Since 2002, the American Library Association has produced an annual Amelia Bloomer List, which contains recently published feminist books for young readers. Finally, in 2017, the Washington Post announced that it was bringing back The Lily, thrusting Bloomer’s vision into the 21st century. Its new editor-in-chief, Amy King, wrote a foreword celebrating Bloomer’s passion in a time of controversy, of the strength that ‘was not given to her but conjured up inside her’. King then explained why Bloomer’s vision is still important:

We need The Lily because these stories must be told. Because there are so many smart, impressive, unapologetic women ready to be heard. There is nothing more exciting than the possibility of screaming their stories to the world.

Emma Butcher is a Leverhulme Early Career Fellow at the University of Leicester researching war and childhood in the 19th century. 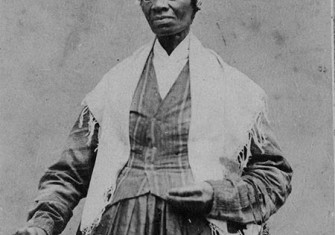 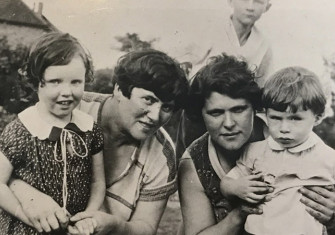