Starting in the 1960s, the Palestinian revolution was galvanised by the production of protest posters which depicted a united people and a hopeful future. As the liberation movement fractured, such visions disappeared. 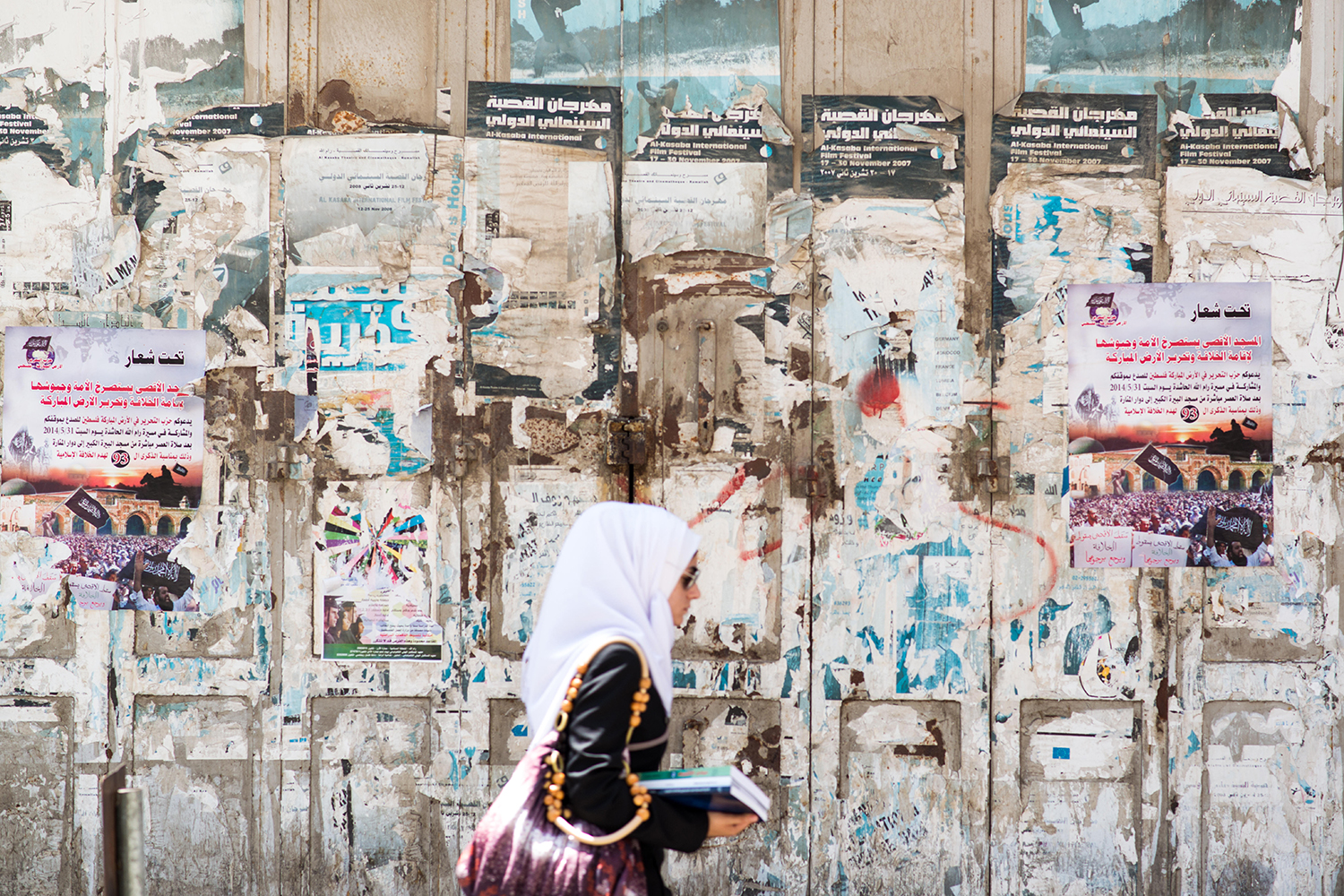 In 1968, Fatah, the Palestinian political party, published its first series of protest posters. Clenched fists, raised arms, ammunition belts, bayonets, rifles – these posters were statements of defiance. In one design, by an unknown artist, a man brandishes a gun and wears the kufiya, the headscarf worn by Palestinian farmers. The Arabic above his head reads ‘the storm’.

Fatah had a revolution to advance, and sought to do so with these posters and its newspaper, Al-Thawra (The Revolution). Over half the Palestinian population had become refugees in 1948. The United Nations voted in November 1947 to divide Palestinian land into a Jewish state and a Palestinian state; this decision to end 30 years of British rule triggered a war between Jews and Palestinians. The armies of Egypt, Jordan, Syria, Lebanon and Iraq invaded, ostensibly in support of the Palestinians. Yet Israel, the new Jewish state, was victorious. In December 1947, Palestinians lived under British rule; by December 1948, they lived under the rule of Israel, of Egypt and Jordan in the Palestinian territories of the Gaza Strip and the West Bank, or in exile in Lebanon, Syria, Jordan, Egypt and Iraq. In a year, Palestinians lost the opportunity to found their own state and over half their population was living in refugee camps. The trauma of that year acquired the name of the Nakba or ‘disaster’.

The revolution began in the refugee camps in the 1950s. Its goals were the liberation of Palestine and the establishment of a Palestinian state. The Arab Nationalist Movement, established in 1952, led the way. It was the most influential of the political parties in the Palestine Liberation Organisation (PLO), an umbrella group established in 1964 to represent the Palestinian people. For the Arab Nationalist Movement, the goals of the revolution would be achieved once Arab states developed the strength to defeat Israel.

The founders of Fatah rejected such a gradual approach. They looked to their fellow students and workers in Algeria and Vietnam, who had overthrown reactionary governments and expelled empires. Lacking influence in the PLO, Fatah set about attracting attention through attacks on Israel. In the words of Fatah’s first communique on 1 January 1965:

From among our steadfast people, waiting at the borders, our revolutionary vanguard has issued forth, in the belief that armed revolution is our only path to Palestine and freedom.

Following the launch of armed strikes against Israel, Fatah’s rise to power in the PLO was swift. Yasser Arafat, who was among the party’s founders, was elected chairman of the PLO in February 1969. Fatah’s bold strategy had displaced the Arab Nationalist Movement from its position of influence.

Fatah’s posters were part of that bold strategy. The aim was to excite the passions of Palestinians and convince them that Fatah was right: they had the strength and unity to liberate Palestine by themselves.

Faced with maintaining the revolutionary credentials that had brought them to influence, Fatah pressed the PLO’s various institutions into service of the revolution. The PLO had founded its Department of Arts and National Culture in 1965, under the directorship of the artist and art historian Ismail Shammout. Beirut became the base of the PLO after 1971 and the PLO’s patronage drew Palestinian and other Arab artists to this centre of artistic activity. By the end of the 1970s, the PLO was publishing over 100 magazines, newspapers and journals from Beirut. These publications required cover images that could be cut out as posters. As a result, the PLO became a pillar supporting artists, as they supported its cause.

In these posters, Palestinian peasants were transformed into revolutionaries. Visions of Palestine’s past were represented as visions of a Palestinian future. Kamal Boullata’s 1968 poster stylised the village of Deir Yassin, near Jerusalem, as a place of harmony. Twenty years earlier, on 9 April 1948, members of Jewish paramilitary groups had massacred around 150 Palestinian civilians in the village. The International Red Cross reported finding decapitated and disembowelled bodies. News of the horror accelerated the flight of Palestinians from their homes. In Boullata’s poster Deir Yassin’s harmonious past serves as a vision for its future.

‘Struggle is the only path to Jerusalem’, a poster produced by the PLO Unified Information Office, shows the Dome of the Rock, the site of Muhammad’s night journey to heaven in Islam. The defence of this holy site had become a central strand of Palestinian identity. In the poster, it becomes a brilliant, colourful symbol of the future toward which woman and children walk. ‘Glory to the workers and fighters on the first of May’, Zaid Wahba’s 1969 poster, connects the liberation of Palestine to the broader campaign of International Workers’ Day.

The search for symbols – of hope, resistance and a better future – was at the centre of the PLO-sponsored artistic output. Shammout employed the style seen in classical Arabic art in his 1965 poster ‘We Are All For The Resistance’; visions of a new Palestine was not to be achieved through Western, imperial art forms.

Mustafa Al Hallaj’s 1969 poster, ‘The Battle of Al Karameh’, commemorates a 1968 battle. Palestine was not used to victory against the Israeli army, yet at Al Karameh a Palestinian unit defeated an Israeli unit. Here were the new heroes of the Arab World, able to better the Israelis in battle. In the poster, the horse symbolises the Palestinian revolution; the dove sitting on the missile launcher communicates that peace will come after the armed struggle.

The dove of peace is similarly present in Abdel Rahman Al Muzain’s 1985 ‘Land Day’ poster. The figure wears the kufiya, connecting him to Palestinian traditional life, and points his pickaxe towards the sun – towards freedom.

These posters provided a solution to the difficult circumstances in which the PLO found itself. The Palestinian people were scattered across the Middle East. The PLO lacked access to television and other forms of mass communication. Posters were cheap and easy to reproduce. The aim was not just to depict the future, but to engage the Palestinian people in achieving it.

Fatah won the support of the people, leading the PLO. It took control of the Palestinian Authority, set up in 1994 to govern the Gaza Strip and parts of the West Bank. But its revolution did not succeed. Today, Fatah’s chairman, Mahmoud Abbas, is president of the Palestinian Authority. He governs one part of Palestinian territory, the West Bank, which is under Israeli military occupation. Its rival, Hamas, seized the apparatus of government in the Gaza Strip in 2007.

As the revolution ran out of steam, the energy driving the focus of the artistic production dissipated. Israel’s invasion of Lebanon in 1982 delivered irrecoverable shocks to the revolutionary ideology, institutional patronage and control of artistic production. Israel’s invasion drove the PLO into exile from its Lebanese base to Tunisia. Israel prevented its return to Palestine. Defeat in Lebanon ruined the idea that an armed struggle would liberate Palestine. It laid bare the reality of the PLO’s situation: it would never hold the military power to achieve its aim. Exiled in Tunisia, the PLO was distanced from a new generation of activists who were beginning to agitate on Palestinian university campuses.

The production of posters continued, but visions of the future disappeared. Beginning in 1987, the First Intifada galvanised the use of photographs of martyrs. The PLO were in Tunisia so leadership of the protests fell to a new generation of local activists. Martyr photography reflected the disappearance of institutional control; new posters were produced by local communities to remember their dead.

Fracture followed. Fatah’s dominance was overturned in the 2006 Palestinian Legislative Council elections. Hamas’ victory in those elections divided Palestinians along party lines. The subsequent failure to form a government, civil war and Hamas’ seizure of government institutions in the Gaza Strip ended possibilities for reconciliation. A poster celebrating a Hamas politician alienates a Fatah supporter. Today’s images are specific to the splintered communities and groups that produce them. Visions of a collective future are gone.

These changes have been gradual. Photos of martyrs have been a consistent feature of posters across the six decades of the Palestinian National Movement and symbolic images appear in the posters of the last decade. Yet Palestinian political art no longer employs the same common set of symbols. Palestine solidarity campaigns and the Boycott, Divestment, Sanctions Movement, launched in 2005, use the tactics of anti-apartheid movements to raise awareness of the Palestinian cause; they call for boycotts and other forms of pressure to force Israel to meet its obligations under international law towards Palestine. Today, Palestinians seek to communicate with an international audience, one that does not identify with culturally specific images.

Throughout the 1960s and 1970s, a dominant ideology sustained the focus and development of symbolic imagery of Palestinian political art. But whereas anti-colonial revolutions had an end point in Vietnam, Algeria and elsewhere, there has been no definitive conclusion in Palestine. Both Fatah and Hamas state that liberating Palestine is their aim. Hamas couches its argument for a continuation of the armed struggle against Israel in Islamist language. Fatah argues that international diplomacy, not violence, is the best path forward. The fracture of Palestinian identity has produced a political art that records the present. Once, it offered visions of the future. 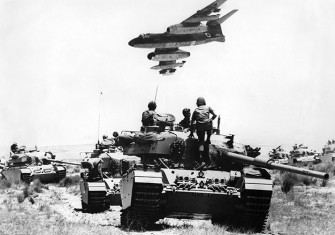 The Iron Curtain Torn By Israel 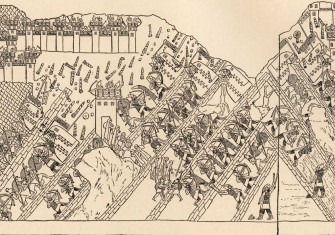