The Afterlife of the Berlin Wall

The fall of the Berlin Wall posed various questions. Was a united Germany dangerous? How to protect the East’s heritage? And how should the Wall be remembered? 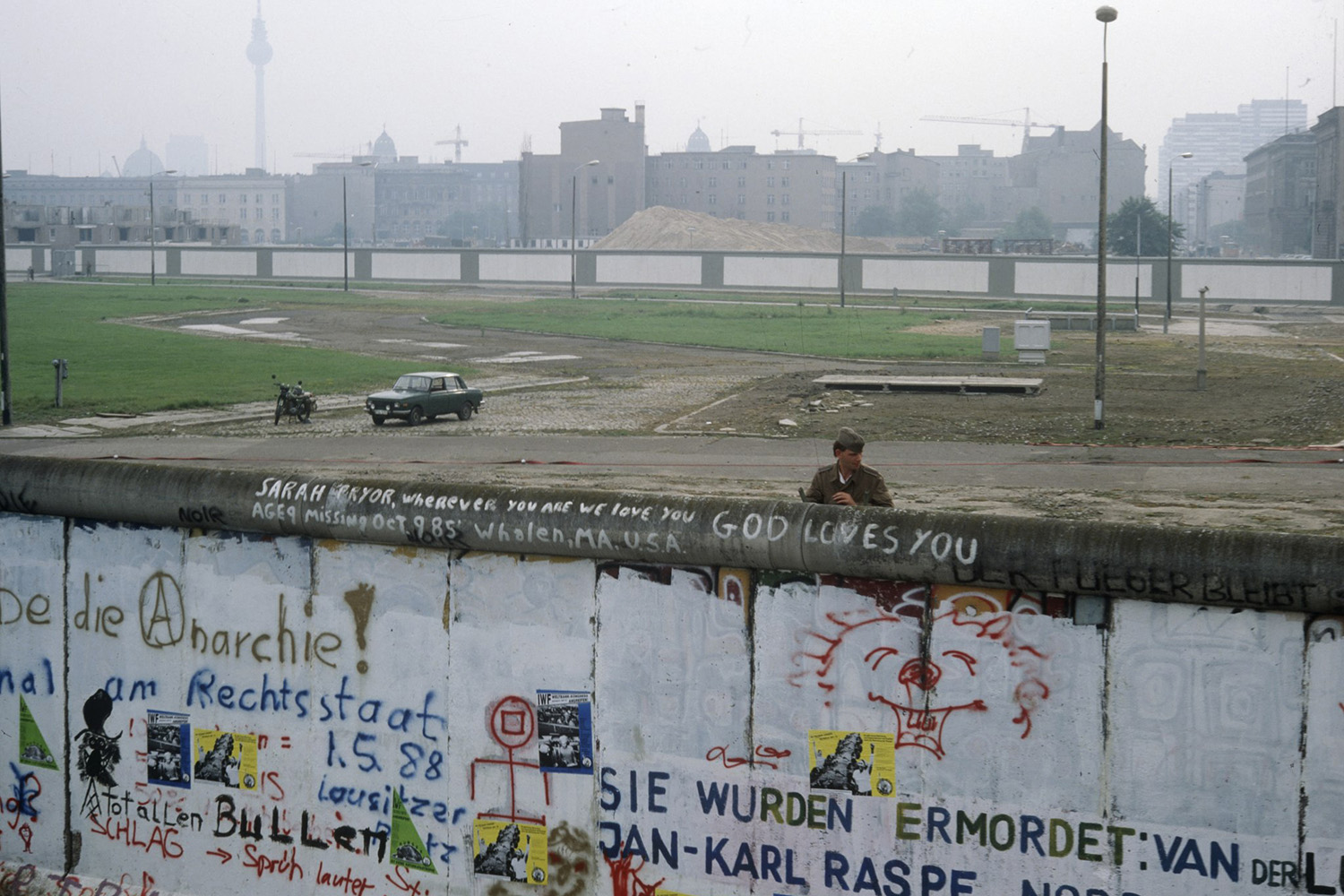 Of the spectacular wave of events that unfolded across Eastern Europe 30 years ago this autumn, the fall of the Berlin Wall on 9 November 1989 has come to epitomise them all. Within days, this once foreboding partition between two bitterly opposed worlds began to disappear from the cityscape, as ‘Wall-peckers’ literally chiselled it away. The Wall’s legacy, however, has proven more tenacious, continuing to divide Germans. Globally, its demise was soon presented as the threshold to our times, heralding the unstoppable force of free market capitalism and liberal democracy. Three decades on, that optimism has soured.

While it stood, the Berlin Wall succeeded in fulfilling its key purpose: obstructing freedom of movement. The Socialist Unity Party (SED), which governed East Germany, fearing economic breakdown after the flight of 3.5 million of its citizens to the West since 1949, began constructing the barrier on 13 August 1961. Over the next 28 years, some 5,000 defectors managed to scale it, while around 100 people were killed attempting to do the same.

Primarily, the Wall was a tangible reflection of the enmity between the ideological camps of the Cold War. To the West, it embodied the inhumanity of Communism; an expedient position that served Western leaders only too well as they had effectively acquiesced in its creation. It soon captured the popular imagination and was often transmogrified beyond its otherwise mundane function. Dutch architect Rem Koolhaas considered it a ‘masterpiece’, citing its psychological and symbolic potency over its physical appearance. On 10 November 1989, journalists were already writing about it in the past tense, as though a living thing had expired, despite the structure remaining intact. 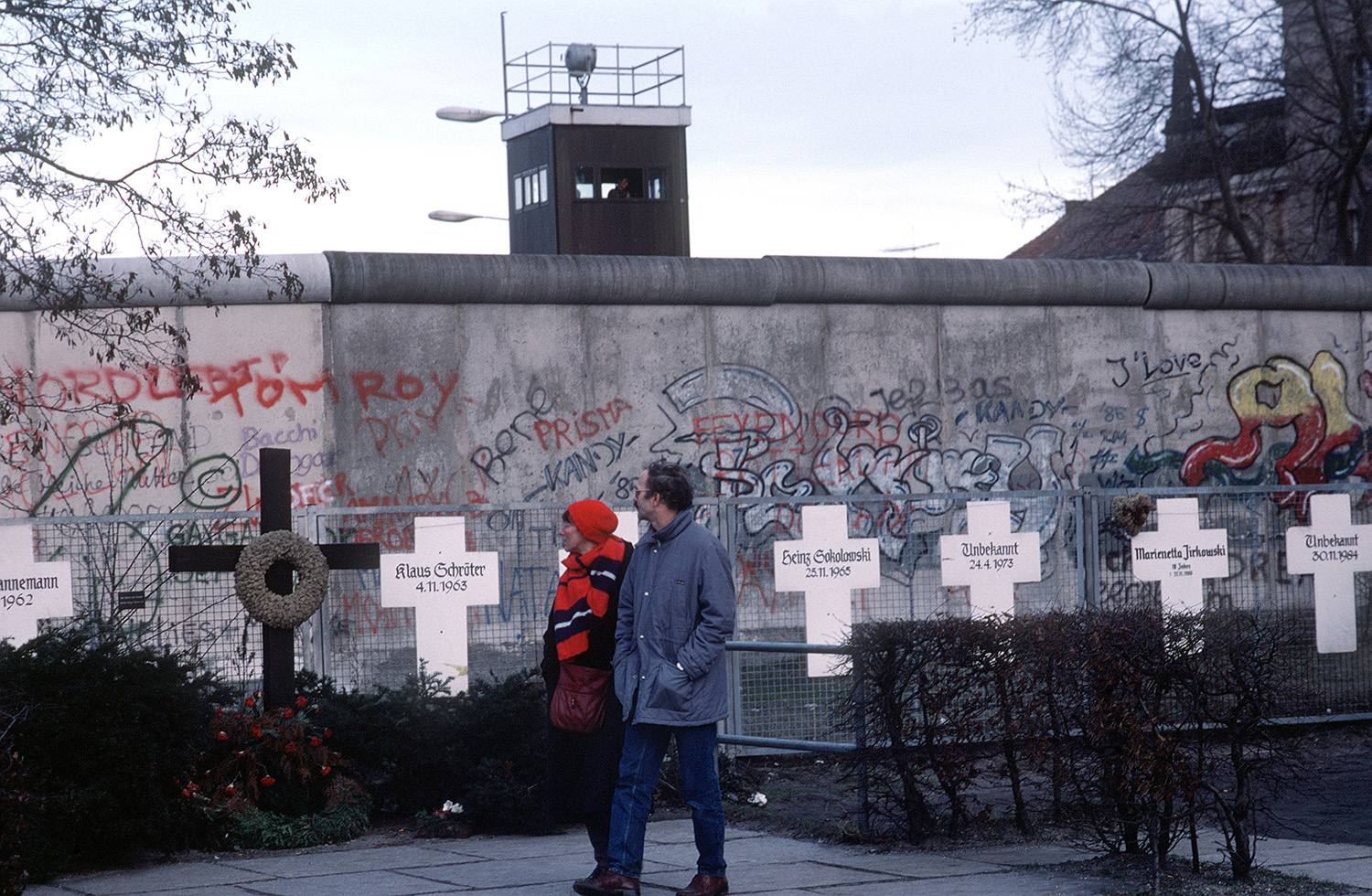 Some commentators have argued that no object better encapsulated Europe’s experience of the 20th century. Indeed, its erection by a Stalinist regime is a poignant reminder that although most Germans enjoyed a return to open society after the Second World War, others had to endure two versions of totalitarianism between 1933 and 1990. The Wall entrenched the divergence of the two Germanies and their irreconcilable visions of the future. One scene in Peter Schneider’s novel, The Wall Jumper (1982), conveys this as East and West Germans come face-to-face in the customs queue at Schönefeld Airport, each regarding the other as barely evolved primates.

For the Bonn Republic (West Germany), the Wall posed an insurmountable obstacle to resolving ‘The German Question’. Reunion with the East was a constitutional imperative for every Western chancellor from Konrad Adenauer to Helmut Kohl. Yet it was the rise of Mikhail Gorbachev as Soviet leader in 1985, along with his reformist agenda, which accelerated events. The Kremlin relaxed its grip on Eastern Europe, unleashing a tide of long-repressed popular discontent that brought down each Communist regime in quick succession.

When, on the evening of 9 November 1989, Günter Schabowski, an SED official, held a televised press conference announcing new travel freedoms, he mistakenly confirmed their immediate adoption. Just hours later, thousands of East Germans surged through the Wall’s checkpoints and rejoiced with West Berliners on the other side. In the end, an administrative error toppled the Wall and exposed the atrophy at the heart of the East German government. Less than a year later, German reunification became a reality.

But even as frenzied iconoclasts delighted in hacking chunks out of the hated barrier, public figures sounded the alarm. Speaking outside West Berlin’s City Hall the day after the Wall’s breach, the ex-mayor Willy Brandt urged his compatriots to preserve something of the structure as ‘a reminder of a historical monster’. In an editorial a week later, Yonah Cohen baulked at the idea of reunification, describing the country’s postwar division into two separate states, both under foreign military occupation, as ‘but a minimal punishment’ and a check on ‘the uncontrollable German lust for power’. 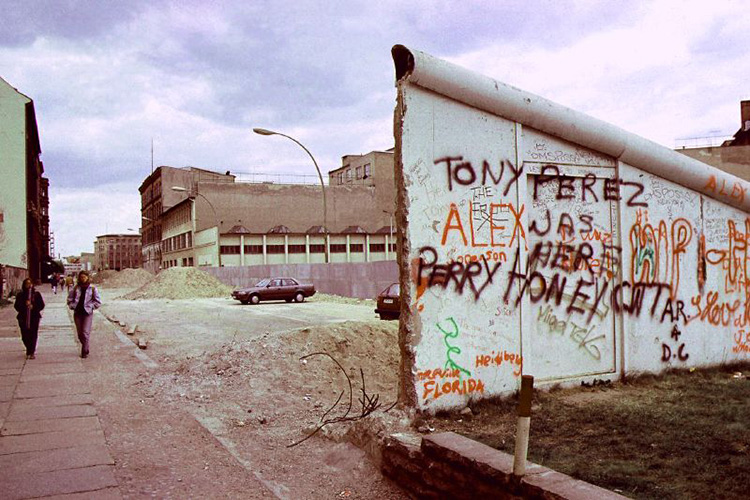 Others worried that reunification would be tantamount to obliterating the shared heritage of East Germans. In January 1990, the writer Günter Grass feared they risked losing their ‘hard-earned identity’ as it ‘would sink beneath the dull weight of a standardised history’. Over the past 30 years, his misgivings have been somewhat validated. After all, the collapse of Communism directly affected just one fifth of Germany’s population. Furthermore, comparisons made by West German pundits between the Nazi and SED regimes seemed outrageous to millions of East Germans raised on tales of Communist resistance to the Third Reich.

This sense of alienation has had profound consequences. Today, the first far-right party since the 1940s, Alternative für Deutschland (AfD), sits in the German Bundestag. Its strongest support comes from the states that once made up East Germany. Here, populists have seized upon an endemic sense of disillusionment with the road travelled since 1989, as well as harnessing latent prejudice towards foreign migrants and refugees. Twenty years after reunification, a poll found that only 25 per cent of East Germans felt like ‘real citizens’ of the new Germany and an additional 59 per cent claimed they did not ‘feel so well’ within it.

The date of the Wall’s downfall, 9 November, is imbued with fateful connotations for Germans. In 1918, it witnessed the collapse of the Hohenzollern monarchy. Most infamous of all, it was the date in 1938 on which the Nazis instigated their nationwide pogrom, Kristallnacht. This may also explain why reunified Germany, for whom the fall of the Wall is its genesis, avoided consecrating 9 November as a national holiday. Certainly, it is impossible to reconcile the heroic demonstrations by East Germans against tyranny in November 1989 with the quiet connivance of millions of Germans 51 years earlier, signalling to Hitler that further violence against Jews would go unopposed. 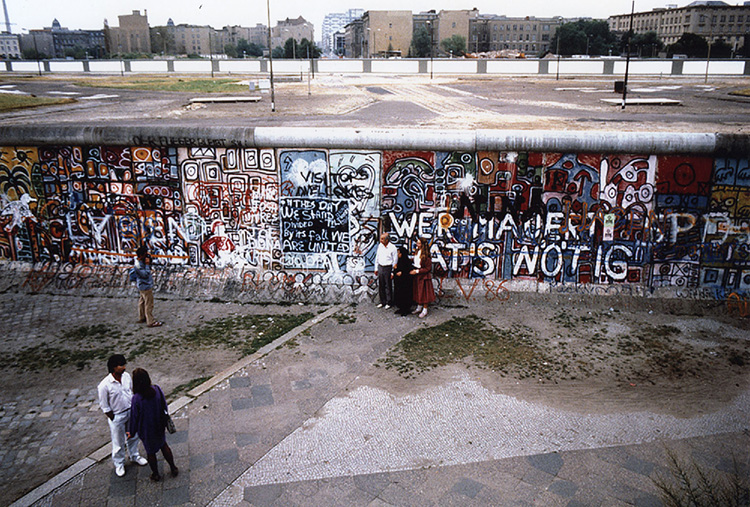 Uniquely among capital cities, Berlin does not shy away from raising monuments to collective shame. Within walking distance of landmarks as illustrious as the Brandenburg Gate and the Reichstag stand prominent memorials to the various ethnic and social groups murdered by the Nazis. It is precisely this culture of national penitence that the AfD deplores. Atoning for those horrors became a defining characteristic of West German identity in a way that it never was for East Germans. After all, the SED believed its Western counterpart had embraced fugitive Nazis, hence the regime’s official designation of the Wall as the ‘Anti-Fascist Protection Rampart’.

Ironic then, that such an ideological edifice soon found itself being reimagined by the very forces it had existed to repulse. Following 1989, the Wall was commodified, as whole slabs were sold off to museums, institutions and private collections worldwide. Companies like LeLé Berlin even hired street artists to touch-up drab sections in order to boost profitability. Just months after France had celebrated the bicentenary of the Storming of the Bastille, fragments of the Wall, like the Parisian fortress before it, became touchstones of the revolution in motion.

Moreover, in the years following reunification, the belief that the Wall should be memorialised became common among most Germans. This coincided with concerns that the structure’s physical erosion from neglect and commerce meant its imminent loss. Incidental to this was the recognition that tourists to Berlin were often perplexed as to where they might be able to encounter the Cold War’s most notorious relic. In keeping with the city’s other memorials, the consensus favoured prioritising those killed scaling the Wall.

In 2004, Alexandra Hildebrandt, director of the Checkpoint Charlie Museum, installed her Freedom Memorial near the border crossing. Her tribute consisted of hundreds of crucifixes, each bearing the name and photograph of a victim of the SED regime. The shrine was welcomed by bereaved relatives, while offering a focal point for tourists in central Berlin. Nevertheless, the lease on the site lapsed the following year and city authorities proceeded to demolish it. Finally, in 2010, the Window of Remembrance, which incorporates images of the victims, as well as preserving a cross-section of the Wall, at the Berlin Wall Memorial on Bernauer Strasse, became Germany’s official monument to its years of division. 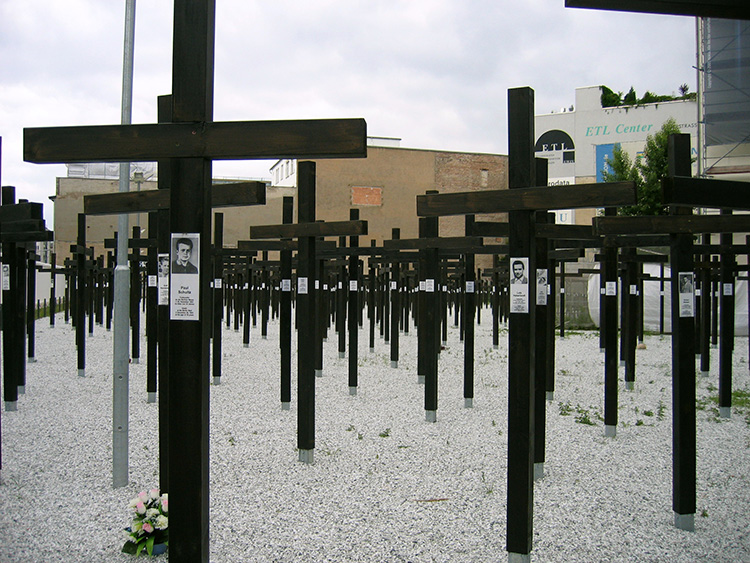 The historical significance of the Wall’s downfall resonated beyond Germany, becoming something of a gateway to all that the 21st century promised. But the intense focus on it and the perception of 1989 as an inevitable, euphoric and peaceful reckoning has often distorted our recollection. In fact, the year ended violently, as Romania’s despised president Nicolae Ceaușescu and first lady Elena were executed on 25 December. Exactly two years later, Gorbachev resigned and the Soviet Union disintegrated as its republics proclaimed independence and embraced market forces.

Internationally, the desolation of Leninism was so seismic in scale that even social democratic parties felt obliged to moderate their core tenets in line with the prevailing ascendancy of free market capitalism. Many rationalised this as a question of electability in what amounted to little more than capitulation to the Thatcherite consensus about there being ‘no alternative’ to capitalism. Yet following the 2008 financial crisis, populist nationalist backlash has emerged in every major Western state. Meanwhile, in post-Communist Eastern Europe, self-proclaimed ‘illiberal’ democracy gained support, especially in Hungary and Poland.

For those versed in Marxist orthodoxy, the fact that the Wall existed at all proved the Bolshevik Revolution and its legacy had been a catastrophic aberration. Karl Marx anticipated a socialist stage of human history, which was inexorable and predicated on the implosion of capitalism. However, the coexistence of the two systems – let alone that those who idolised Marx had reinforced geopolitical boundaries by constructing the Wall in the first place – demonstrated that the Soviet experiment launched in 1917 had been both opportunistic and premature.

In one of The Communist Manifesto’s most evocative passages, Marx professed: ‘All that is solid melts into air, all that is holy is profaned.’ He was describing the unsentimental dynamism of capitalism. Yet the fall of the Berlin Wall, which presaged the hegemony of that economic system and the efforts to preserve, even to sacralise the memory of Germany’s division, is a paradox worthy of that quote. Thirty years on from 1989, the current, supposed ‘Leader of the Free World’ came to power vowing to build a wall. This, if anything, speaks to the impermanence of any seemingly fixed state of affairs. Time and again, history has shown this to be the only thing of which we can be certain.

Danny Bird is a graduate of UCL School of Slavonic and East European Studies, with a special interest in modern European history. 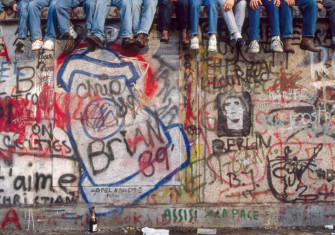 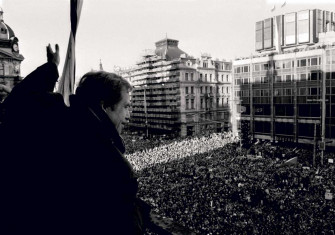 The Velvet Revolution In The Regions