‘Strangled for a bird’: The Case of the Aldbury Poachers

A double murder in an English wood became a Victorian cause célèbre, provoking a national debate about the tyranny of land ownership and the loss of ancient liberties. 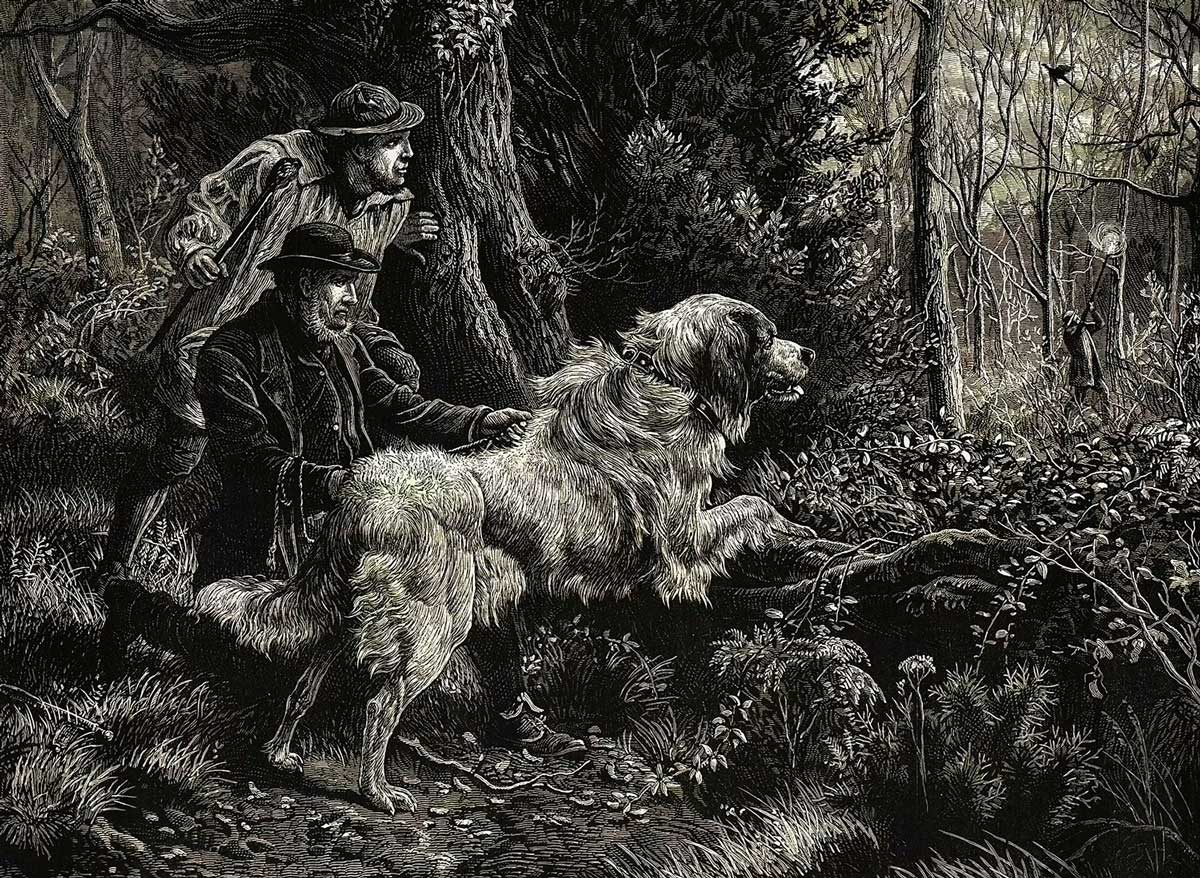 Catching a Poacher, by Horace Harral from The Graphic, 1874.

In 1848 the Reverend Charles Kingsley of Eversley in Hampshire wrote of a labourer’s wife brooding on the ‘dark plantation’ that had fatally tempted her poaching husband. In lines often quoted, she reflects on how

Later to be known as the author of The Water Babies, Kingley’s fierce attack on the ‘bad squires’, whose desire to rear and shoot excessive amounts of game was a source of bitter conflict in the countryside, clearly struck a chord. Commonly known as ‘The Poacher’s Widow’, this ‘rough rhyme on a rough matter’ appeared in various printed forms and as a popular concert-hall song was still in circulation at the end of the century.

By this time, Kingsley’s words had found new resonance via a number of well-documented clashes in the closely guarded preserves of southern England. Although the controversial laws surrounding ‘winged’ and ‘ground’ game (pheasants and hares for example) had been reformed in 1831, the officially sanctioned pursuit of such animals was still a privilege largely reserved to landowners. If improvements in Victorian policing had helped produce a generally less violent society, the game laws continued to be vigorously contested and brutal night-time encounters in which poachers, as well as keepers, sometimes paid with their lives still occurred. Eventually resulting in the deaths of four men, the best known of these was the case of the Aldbury Poachers, an episode played out in a glare of publicity between December 1891 and March the following year.

While sections of the press were drawn to the more sensational aspects of the story, the numerous reports of the trial and sentencing of three Hertfordshire poachers for the killing of two gamekeepers, William Puddephatt and Joseph Crawley, would trigger a lively national debate, petitions to the Home Office and angry exchanges in Parliament. And as with Kingsley’s powerful verse, the incident produced a range of cultural responses from traditionally styled execution ballads to paintings in illustrated magazines. 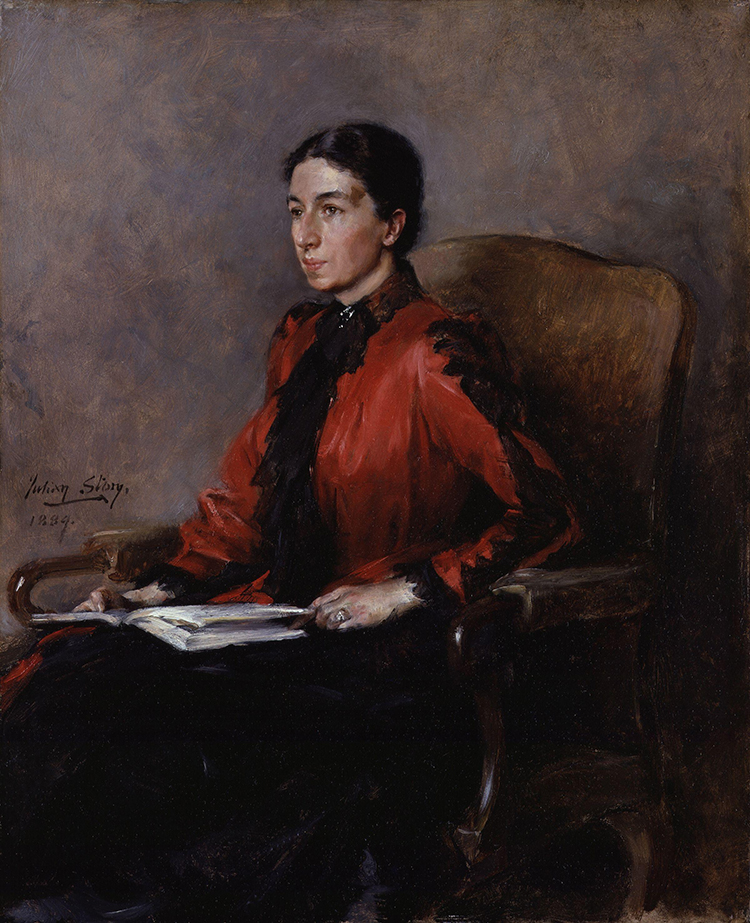 The case also informed the work of Mary Augusta Ward, a novelist and social commentator who wrote under her married name Mrs Humphry Ward. Convinced of its ‘representative interest’, she incorporated various features of the incident into her best-selling 1894 novel, Marcella. As Ward and many others understood it, a poaching affray in an obscure country district was about more than just the taking of game.

Whatever its stated value, because the law deemed it ferae naturae (wild by nature) game could not actually be stolen. This meant that poaching could be, and often was, characterised as an ‘artificial’ crime that contained little, or no, moral wrong. Indeed, with ‘every beast of the earth’ and ‘fowl of the air’ granted freely to Man, the poacher could even take his authority from the Bible. With the modern system of game laws synonymous with judicial bias, and traceable to the exclusive monopoly on hunting that followed the Norman Conquest, it was also possible to view poaching as an assertion of ‘lost’ English liberties. Equally it could be framed as a legitimate response to the later ‘filching’ of land (especially that regarded as common) through its widespread enclosure in the 18th and early-19th centuries. In the month preceding events at Albury, Kier Hardie’s Labour Leader expressed admiration for the ‘honest and independent poacher’ and cast the ‘landlord and his bullying crew of gamekeepers’ as the real criminals.

While not necessarily the romanticised class warrior of some imaginings, at the very least the poacher represented a challenge to the gamekeeper – the person on the front line of a system neatly summarised by the eponymous heroine of Marcella. A squire’s daughter, she feels bound to remind her well-to-do neighbours that:

the whole machinery of law and order seems to exist for nothing in the world but to protect your pheasants! There are policemen – to catch poachers; there are magistrates – to try them. To judge from the newspapers, at least, they have nothing else to do.

For men like the novel’s tragic anti-hero Jim Hurd, a man doomed to hang for killing a keeper, to poach was not just a means of obtaining extra food for his wife and sick child, but a powerful statement of collective right.

Them rich people took advantage of yer’ … The poor were downtrodden but they were coming to their rights. The land and its creatures were for the people! Not for the idle rich.

Since the summer of 1892 Ward had been living at Stocks, a fine Georgian house in the picturesque village of Aldbury and close to the spot where Puddephatt and Crawley had been killed. At the time of their deaths, both were in the service of Joseph Grout Williams, a prominent Conservative and JP and owner of Pendley Manor. With its proximity to London making it a prime location for fashionable weekend shooting parties, Hertfordshire was now one of the most densely preserved parts of the country. It was also a place where the lure of poaching remained strong – especially in the winter months when the preserves were at their fullest and the local economy at its most sluggish.

Late on the evening of 12 December 1891, two labourers and a chair-turner set off for the ‘dark plantation’ of Aldbury Nowers woods. Equipped with a pair of old-fashioned muzzle-loaders, Frederick Eggleton, William Smith and Charles Rayner – all in their 30s and with experience of poaching – were on the lookout for pheasants. If not quite the ‘murderous and desperate gang’ of some accounts – the point would later be pushed that severe economic hardship had been a motivating factor – by going out armed and at night they were certainly committing a serious offence.

Facing the possibility of up to 14 years in prison, when confronted by Puddephatt and Crawley the poachers chose to stand their ground. In the ferocious struggle that followed, both keepers’ skulls were crushed by guns now doubling as clubs. Swiftly apprehended and charged with murder, all three poachers were committed to appear at the Lent Assizes in Aylesbury. Yet while their involvement in the killings was not in doubt, the case still turned on the issue of intent. If self-defence could be proved, only the lesser charge of manslaughter could be brought. Rayner, for example, had suffered his own head being split ‘to the bone’.

Following an exhausting 12-hour trial on 23 February 1892, Smith (who testified to fleeing the scene) was found guilty of manslaughter and given 20 years. Eggleton and Rayner were sentenced to hang. But that was not the end of the matter. In the days following, a jury member voiced doubts about the murder verdict, while petitions for reprieve were energetically organised. With respected national figures such as the naturalist Alfred Wallace, and the writer and humanitarian, Robert Buchanan entering the fray, the case drew a level of interest that in Ward’s recollection fuelled a ‘good deal of rather hot discussion of the game laws, and of English landlordism in general’. 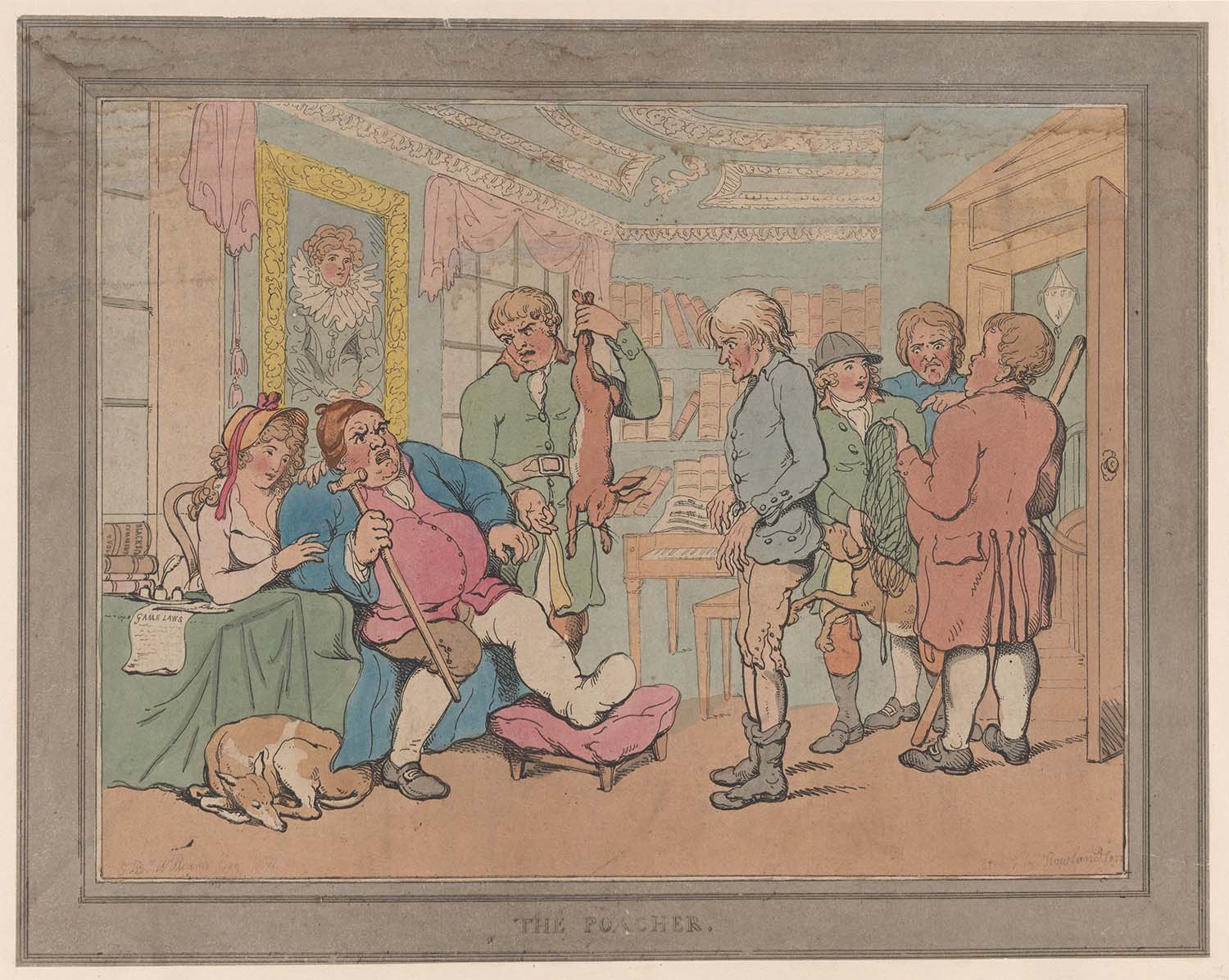 The Poacher, by Thomas Rowlandson, 1806.

Insisting on manslaughter not murder, and pointing to the injuries sustained by the poachers, Buchanan claimed in the Daily News that ‘even that lesser crime would never have been committed if the present game laws and present selfish system of game-preserving did not exist’. Denouncing ‘The Cult of the Sacred Birds’, a piece in the Pall Mall Gazette dwelt on the human cost of game-preserving. As with the keepers, all three poachers were married with families. The Liberal MP and barrister, Charles Conybeare accused the Conservative Home Secretary, Charles Matthews, of being complicit in ‘judicial murder’. Though personally harbouring doubts about the case, the latter refused to intervene and Eggleton and Rayner went to their deaths at Oxford Gaol on 17 March 1892.

Wondering how it was possible for essentially honest men to be ‘strangled for a bird’, the more radically-inclined press continued to rage against ‘Matthews the Butcher’. Reiterating the extremities of game ‘worship’, the Daily Chronicle imagined ‘caddies on a golf-ground armed with guns and bludgeons to keep off unlicensed intruders on a favoured links!’ It also quoted the key lines from ‘The Poacher’s Widow’. Reynolds’ Newspaper, a longstanding critic of Game Law ‘tyranny’, printed the whole thing. And while some reference was made to the dead keepers, the focus was invariably on the poachers – the victims, it seemed, of an ill-matched struggle between the poor labouring man and the privileged game-preserving establishment. 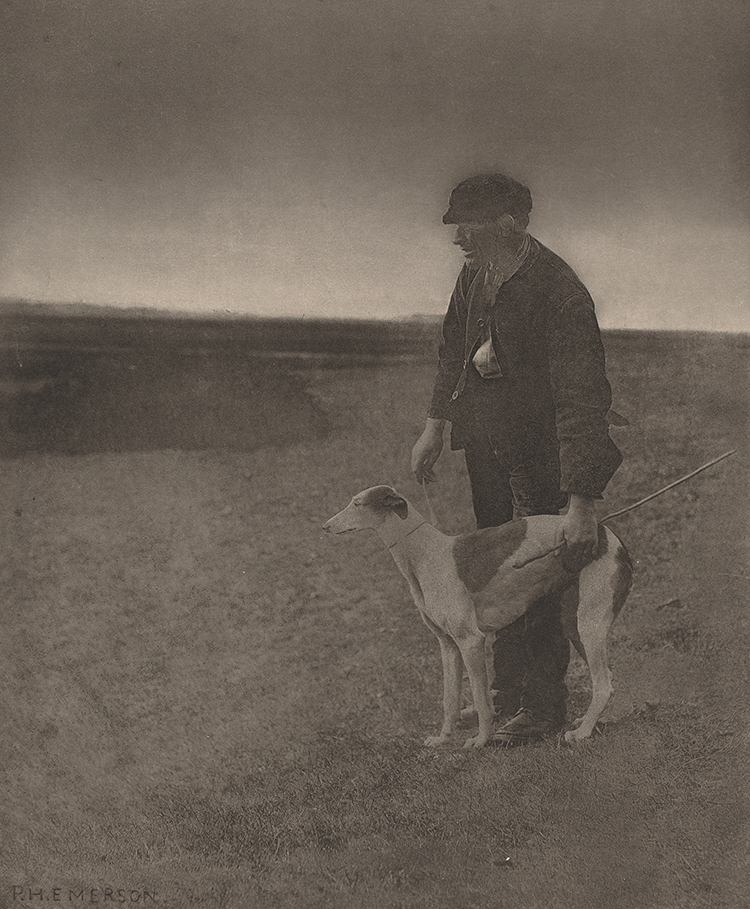 To fully understand the public’s reaction, we need to consider the case’s timing. More or less coincident with the case, George Millin’s famous survey of conditions in English villages had argued that contrary to the democratising terms of the Third Reform Act, the proliferation of ‘parks, pleasure grounds and coverts’, and the refusal of landlords to build cottages that might house poachers, revealed the unacceptable face of modern day ‘feudalism’. Inextricably linked to debates over the present and future use of the land – a development encouraged by a rash of other studies on the problems facing rural areas, as well as by groups like Alfred Wallace’s Land Nationalisation Society – the ‘rough melodrama’ of poaching was now a part of  contemporary political debate. The question of ‘who owns the game’, had become (as it remains today), who owns the land on which it is reared?

None of this could bring back Puddephatt and Crawley or Eggleton and Rayner. Neither did it end poaching-related violence or public fascination with it. One of British cinema’s earliest successes was William Haggar’s frenetic 1903 account of A Desperate Poaching Affray. Before their inevitable capture, the audience is encouraged to side with the two poachers as they shoot at, and grapple with, a host of pursuing keepers and police. Today, the keepers at the centre of the Aldbury case lie in the same quiet churchyard as Mrs Humphry Ward. The bodies of Eggleton and Raynor were disposed of at their place of execution. In a death-bed confession, Smith reportedly admitted to both killings. Aldbury Nowers woods are said to be haunted.

Stephen Ridgwell completed a PhD on representations of poaching in Victorian and Edwardian England. He is working on a study of the poacher in 19th-century melodrama. 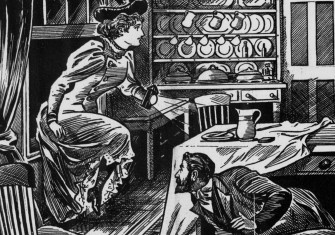 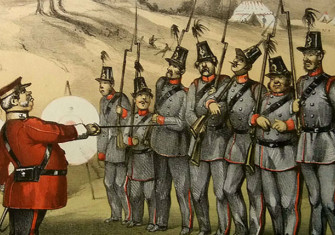