The Lost Literature of Medieval England

Gaps in our knowledge of the past can be frustrating, but occasional speculation about what we know to be absent is not always a bad thing, suggests Eleanor Parker. 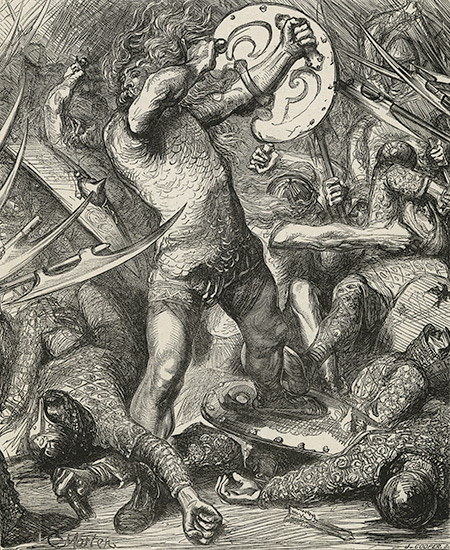 ‘Lost literature’ is an evocative phrase. One of the books which first sparked my interest in medieval literature as an undergraduate was R.M. Wilson’s 1970 study The Lost Literature of Medieval England. This wide-ranging book – as intriguing as ever, although dated in places now – gathers together evidence for English texts, manuscripts and legends from the medieval period that no longer survive. It lists many tantalising hints of stories lost to us, including brief allusions to heroes like Wade and Sceaf, books mentioned in the medieval catalogues of now dispersed monastic libraries, or scraps of quotations from lost poems.

Not all such references in medieval literature can be taken at face value; scholars are not as ready as they used to be to assume the existence of a lost source behind every medieval text. Even so, these kinds of references can be an important reminder of the potentially huge gaps in our knowledge. It is always sobering to recall that had the manuscript of Beowulf been lost, for instance, we would have no idea such a poem ever existed.

Particularly fascinating to me is a cryptic remark in the Gesta Herwardi, a 12th-century Latin prose text about the adventures of the English rebel Hereward. The subject of various legends, Hereward is most famous for resisting Norman rule in the area around Ely, in Cambridgeshire, in the 1080s. He is still a popular local hero and his best-known exploits involve his time as an outlaw; he was a proto-Robin Hood, hiding out in the Fens and tricking Norman lords with his ingenious schemes.

In addition to these stories, the Gesta Herwardi credits Hereward with a whole array of youthful adventures, which the author seems to have drawn freely from romances and legends of English, Norman and Scandinavian origin. As a young man Hereward travels widely: he defeats a semi-human bear in the north, rescues a princess in Cornwall and fights as a mercenary in Ireland and Flanders before coming home to Lincolnshire to find his lands under Norman control.

The author of the Gesta knew the area where Hereward lived and claims to have met some of his companions. Like Robin Hood, Hereward had a gang of outlaws to share his adventures and the Gesta lists their names and adds short comments on some of their exploits. Among them is Hereward’s nephew, Gille, who the Gesta notes was nicknamed Godwine Gille ‘because he was not inferior to the Godwine, son of Guthlac, who was greatly celebrated in the tales of the ancients’.

This is a puzzling aside. Who was this Godwine, son of Guthlac, and why was he celebrated? The Gesta gives no further details. Godwine is a very common Anglo-Saxon name and neither Hereward’s nephew nor his apparently famous namesake can now be identified.

The name Guthlac might suggest a link to the great Lincolnshire saint Guthlac, who lived in the same region as Hereward four centuries earlier. St Guthlac, who was born into a Mercian family, gave up the life of a warrior to become a hermit in the Fens at Crowland. He is the subject of two Old English poems, among other texts, and an abbey was founded at Crowland that preserved his memory.

The earliest account of St Guthlac’s life, written around 730-40, says that he was named for a tribe called the Guthlacingas and that, as a young warrior, he knew tales of ‘valiant deeds of heroes of old’, including his own ancestors. Was there a story about a hero called Godwine, son of Guthlac, who was remembered in the area around Crowland? Did tales about him inspire both the young St Guthlac and Hereward’s companions, centuries apart? Maybe this Godwine was the subject of a poem, or just a local legend; we shall probably never know.

In studying the past it is usually more useful to try to understand the sources we have rather than speculating about the lost and the absent. But every now and then it can be rewarding to let the imagination explore such possibilities. If nothing else, it helps us to value what has survived, a reminder that, when dealing with the medieval period, we are often at the mercy of a process of accidental survival. In the Gesta Herwardi we may have a hint of the lost literature of medieval Lincolnshire – the stories people were telling in the Fens, 900 years ago.

Eleanor Parker is a medievalist and author of A Clerk of Oxford.