Joanna Bourke on how new ways of looking at masculinity are revising our view of men’s experience in the First World War.

Paul Martin considers what message our mania for collecting has for history in post-modern times.

The celebrated King of the Franks may have become the first Holy Roman Emperor, but what other impact and legacies did he leave Dark Age Italy? Ross Balzaretti investigates.

Lorna Walker discusses the iconography of images decorating the Cloister in Monreale and the debate about social order that it contains.

Alan Taylor examines how the social concerns and ambitions of the new republic and those of the author of Last of the Mohicans intertwined - and how they gave him the canvas to become the United States' first great novelist.

The role of British architects in 19th century Russia: Jeremy Howard and Sergei Kuznetsov reveal how the pleasantest sight that some of Dr Johnson's Scotsmen saw was not the high road to England but the sea passage to Russia, where they found fame and fortune making a key contribution to urban remodelling and architecture. 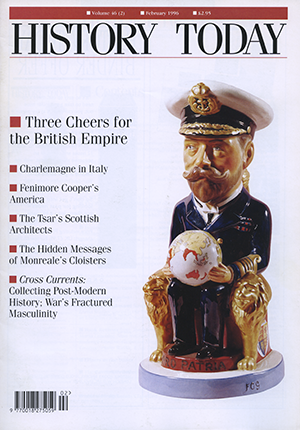