A Soldier's Tale from Krushchev's USSR

Ann Hills on the campaign to save Lambley Railway Viaduct, South Tyne

Republican Ruminations from Down Under

Adolf Maps It Out

German Aerial Reconnaissance Photography of London and the Home Counties, 1939-1942.

All Quiet on the Western Front

Modris Eksteins on how the Hollywood treatment of Erich von Remarque's book describing the Great War 'from the other side' impacted on a Europe traumatised by slaughter and fearful of its future repetition.

Painting, sculpture, photography, poster art, architecture, pageant - all were used by the totalitarian regimes in the 1930s. We review a selection of the images from the Hayward Gallery exhibition.

Did America's far right plot against Franklin Roosevelt and his New Deal - only to be foiled by a retired Marine Corps general? Clayton Cramer lifts the lid on an intriguing but little-known tale.

The X Factor in X-rays

New innovations in radiology have sparked public criticism as to its safety and cost-effectiveness. Wilhelm Conrad Rontgen's discovery of the X-ray in 1895 and its subsequent use in medicine sparked similar safety and health hazard concerns throughout its development.

David Elliott looks at how Mussolini, Stalin and Hitler used culture to their own ends and how the ramifications of this has continued to the present. 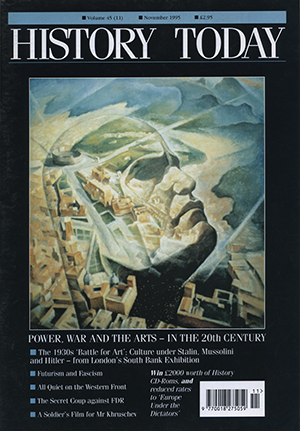