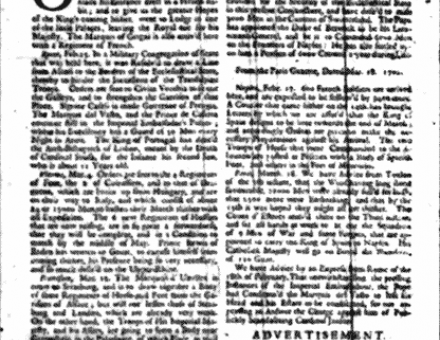 Newspapers and Politics in the 18th century

‘Have the authors of a two-penny weekly journal, a right to make a national inquiry'? 18th-century governments thought not and neither did the newspapers’ readers of the time.

Tony Aldous observes the Newham based Passmore Edwards Museum which tells part of the story of the Great eastern railways.

Was the murder of the Count of Flanders by his own vassals divine retribution for past errors, or simply another stage in the development of a state? The chronicle of Galbert of Bruges gives a day-by-day account of the dramatic events following the assassination.

The Danes and the 'Danelaw'

The Revival of England's White House

A look into a building designed by an early American architect situated in Hammerwood Park near East Grinstead in Sussex.

The Trust in the Six Counties

Archaeology in Britain - New Views of the Past

A look into the largest ever archaeological exhibition at the British Museum.

Richard Normington looks into the popularity of Wargames.

The Treaty of Versailles

David Stevenson takes a look back on the treaty that ended the First World War.

James Graham-Campbell looks at the persisting image of the Vikings as pagan raiders striking at isolated Christian settlements. But is this the whole truth? And how and why did the Vikings adopt Christianity?