Anglo-French relations, often fraught, came to a head in the crucible of the Indian Ocean. 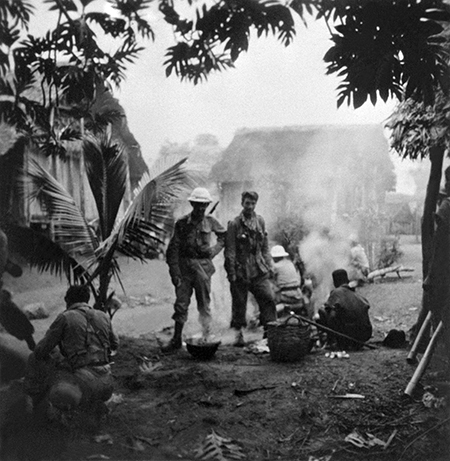 When violence suddenly broke out in the colony of Madagascar in March 1947, French officials were convinced they knew who was stirring up the trouble. It was not just communists and nationalists who were to blame, they argued, but also the agents and influence of France’s two supposed allies: ‘Anglo-Saxon’ Britain and America.

It is this that makes the story of the brief but bloody Madagascan Revolt a curiously pertinent one. France’s relations with Britain have come under increased scrutiny since the Brexit vote, which has generated so much public discussion and interest in the old rivalries between the two countries, and the ‘Great Game’ between them on ‘the Red Island’, off Africa’s south-eastern coast, illustrates much about those relations.

The Madagascan Revolt erupted late in the night of Saturday, March 29th, 1947, when two groups, made up of around 2,000 indigenous insurgents, launched simultaneous attacks on a French military camp at the town of Moramanga on the east of the island. Moving stealthily, the attackers reached the camp completely undetected and then hurled a succession of incendiary bombs at the outposts before storming through barbed wire and gates. By the time the remnants of the attacking force withdrew the following morning, they had killed 22 people and wounded 12. The town, in the words of one witness, was ‘devastated’. All outside communications had been cut and the streets were ‘littered with bodies’.

News of the attack stunned French administrators, who regarded the local population as docile. There had been little trouble on the island since 1894, when a 3,500-strong French force had landed on its north-west coast and hoisted the tricolour, dashing the hopes of American rivals who wanted to get there first. In Paris the rebellion also caused serious alarm, partly because it might have encouraged nationalist rebellions elsewhere in France’s empire.

Over the next few months, French soldiers fought a bitter campaign against local guerrillas, driving them back into the hills and forests and away from towns, settlements and farms. Many local people died at the hands of the French armed forces: some estimates have put the figure as high as 100,000.

Throughout this bloody episode, many French officials were convinced that they saw an ‘Anglo-Saxon’ hand at work. In early January 1947, French intelligence officers were alarmed by reports about the links between a Madagascan nationalist movement, the Mouvement Démocratique de la Rénovation Malgache (MDRM), and ‘foreign consulates’, which were allegedly supplying them with large amounts of cash. On March 11th, at a meeting at the MDRM’s headquarters, the party leader, Rahenja Ralison, had even addressed the delegates, proclaiming that ‘the purchase of arms for our future state is going well. Let us thank the English!’

French spies also knew that MDRM’s deputy leader, Joseph Raseta, had visited London in the preceding month. ‘It would be of the greatest interest to question Raseta about his links with the British and perhaps with the Americans’, ran one report. The previous year, the visit to London by another nationalist leader had alarmed senior ministers in Paris, who had asked their ambassador to London to find out, as a matter of urgency, as much as possible about the ‘meetings with British personalities’.

The French authorities also thought they knew the identity of one of the ‘Anglo-Saxons’ who was stirring up nationalist activities: a former British national and soldier, who lived and worked in Madagascar, called ‘Major’ John Morris. By March 1947, the French intelligence service was keeping a close and careful watch over Morris and another official, Major Nicholson, who worked at the British consulate in the capital, Antananarivo. By the time Morris was eventually expelled from the island, his activities had caused real friction between the British and French governments.

French suspicions partly reflected their age-old fears about the continental neighbour and rival they called ‘Perfidious Albion’. By 1945, rivalry and competition with Britain was too deeply entrenched in the French national psyche to just suddenly disappear. The entire French nation and its identity had been forged by a collective rivalry with the English: as the French historian, Jules Michelet, argued, ‘the struggle against England has done France a very great service by confirming and clarifying her sense of nationhood’.

Paris had good reason to fear foreign interest in Madagascar. It had considerable strategic importance, partly because of its natural resources but also because it was a good base from which to control the western stretches of the Indian Ocean.

French suspicions seemed confirmed by British and American plans in the Second World War. If the Japanese captured Madagascar, asserted Winston Churchill, they would use it as an aircraft and submarine base from which they could ‘paralyse’ Britain’s communications with India and its eastern empire. In May 1942, determined to deny the Japanese a base in the western part of the Indian Ocean, Churchill ordered the seizure of the town of Diego-Suarez in northern Madagascar and Operation Ironclad got underway.

The resistance in Madagascar had been stamped out by the end of 1948, but in the months and years that followed, French administrators closely monitored nationalist activity for any signs of American or British involvement. In 1950, for example, French officials cancelled a visit that two left-wing British parliamentarians, Archibald Fenner Brockway and Raymond Blackburn, planned to make to the island. Both men had proclaimed their interest in ‘liberating oppressed colonial peoples’ and working ‘on behalf of the liberty of colonial peoples’.

The story of Anglo-French rivalry in the Madagascan Revolt reveals a much more complex picture of France’s relations with its two closest allies than is widely seen. The story also presages other events in the coming years, when France was at loggerheads with both Britain and America. In some theatres, such as Biafra in Nigeria in 1969, the French fought a covert war against perceived ‘Anglo-Saxon’ influence in a region they regarded as their own pré carré (‘fiefdom’). At other times, such as in Gabon in 1964 and Chad in 1975, local leaders were toppled, almost certainly at the instigation of Paris, because they were deemed to be dangerously under American influence. And during their two epic post-colonial wars in Indochina (1945-56) and then Algeria (1954-62), French rulers were suspicious of British and American activities and motives.

The rivalry on the Red Island, in other words, testified to an ancient past as well as heralding a postwar, and perhaps post-Brexit, future.