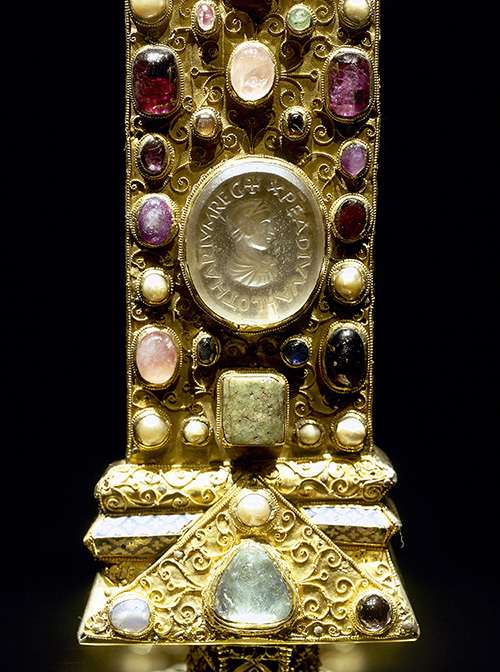 It is a familiar story: a king dissatisfied with a loveless marriage that had lost its political value, burning to marry another woman accused by some of witchcraft; a group of educated royal advisers frantically devising strategies to make their king’s wishes a reality; an intransigent pope refusing to countenance any remarriage on principle, with a dash of realpolitik thrown in; an inheritance crisis and a scandal whose impact on European history can still be easily discerned today.

The king is Lothar II, great-grandson of Charlemagne; the two women Theutberga and Waldrada; the pope Nicholas I. This was not just a royal divorce scandal – this was the first royal divorce scandal in European history, which raged from 858 to 869. But, unlike his better-known counterpart, Henry VIII, Lothar II could not find a way out and died still married to his despised queen. The king and his advisers were, unwittingly, pioneering a new kind of political crisis.

Earlier medieval kings – including Charlemagne – had extricated themselves from inconvenient unions without much fuss. They had done so, however, from a position of political security. Lothar, at the point of his attempted divorce, was still a young man, fresh to the throne, whose grasp on power could not be taken for granted. Like Catherine of Aragon, Lothar II’s wife Theutberga had powerful relatives. This was why he had married her in the first place and it meant the king had to tread with circumspection in getting rid of her.

So Lothar probably thought he was being clever when, in 858, he orchestrated an ordeal at his palace of Aachen. To test the truthfulness of rumours allegedly circulating that she had had incestuous and unnatural sex with her brother before marrying him, Theutberga, or rather her champion, was compelled to plunge a hand into boiling water. For reasons which are still hard to explain, but which presumably reflect a lack of consensus at Lothar’s court, the champion passed the ordeal unscathed.

In response to this remarkable setback, the king turned the matter over to two church councils in 860. He doubtless reckoned that his bishops would prove more reliable than the direct judgement of God in the failed ordeal – and so they did. After a dubious show trial in which Theutberga supposedly confessed that the rumours about her were true, the councils dutifully confirmed that Lothar could leave his queen and marry again. This he duly did, making a queen of his mistress Waldrada – who some suspected had bewitched him, such was his emotional attachment to her.

But in handing the case over to the bishops, the young king had committed an error which ultimately brought down his kingdom. It was effectively an invitation for others to get involved. The rulers of the kingdoms on either side of Lothar’s realm were his two older uncles, also descendants of the great Charlemagne – and with the dream of reuniting Charlemagne’s fragmented empire never very far from their thoughts. The king of the West Franks, Charles ‘the Bald’, and the king of the East Franks, Louis ‘the German’, kept close eyes on Lothar’s difficulties. So, too, did their clerics.

One of those clerics was Hincmar, the great archbishop of Reims and loyal servant of Lothar’s uncle Charles. It is to Hincmar that we owe the single most detailed and revealing source about the whole affair, an 80,000-word treatise on the case, written in 860, known today as De Divortio, or On the Divorce of King Lothar and Queen Theutberga. Despite that title, Hincmar’s argument was that the councils of Aachen had erred: Christian marriage was indissoluble and divorce was not possible. If Lothar and Theutberga were man and wife, they could perhaps separate – but never remarry.

That ‘if’ mattered: Hincmar had slipped in a discreet get-out clause. He suggested that, were Theutberga indeed guilty of the monstrous charges laid against her, then according to canon law she was incapable of being married. He had left the door to Lothar’s remarriage ajar.

That door was slammed shut not by Frankish kings or their clerical servants, but by Pope Nicholas I. As soon as he heard about the case, Nicholas wanted to establish the facts and definitively resolve the matter. As the king’s arguments grew ever more convoluted and contradictory, so the pope grew increasingly infuriated. He eventually excommunicated Waldrada and threatened to do the same to the king. Lothar crumbled and unwillingly took back Theutberga as his queen. He died, still lobbying to leave her, in 869.

The divorce case of Lothar II may be less well known than Henry VIII’s – but its consequences were surely no less far-reaching. It marked a milestone for papal authority. Even if Nicholas’ immediate successors were not quite so forceful, henceforth kings always had to reckon with the possibility of interference in their marital affairs. That did not stop them leaving wives who had fallen out of favour, but it made the process more sensitive and, frankly, difficult, as Henry was to discover.

Still more important was the fate of Lothar’s kingdom – the Middle Kingdom between West and East, Lotharingia (literally, ‘Lothar’s kingdom’). Lothar and Theutberga had no children, so upon his death his lands were divided between his two uncles, Charles and Louis. Lothar did have a son with Waldrada, Hugh, who later put in his claim to his father’s kingdom. But, disadvantaged by his birth, Hugh was defeated, tonsured as a monk and blinded for good measure.

As a consequence of a disastrous political miscalculation, some bad luck and maybe, too, those mysteries of the human heart that are so hard for historians to ascertain (but so dangerous for them to ignore), what could have become the most powerful of Charlemagne’s successor kingdoms collapsed. As dynasties came and went, West Francia evolved into France and East Francia –  albeit in rather more circumvented fashion – established the foundations of Germany. The lands in between remained contested. Lothar’s kingdom, Lotharingia, became the region of Lorraine, an excuse if not a cause for conflict between its more successful neighbours right into the 20th century. Maybe the real scandal is that this dramatic and momentous series of events is so little known today.

Charles West teaches early medieval history at the University of Sheffield. He is the translator, with Rachel Stone, of The Divorce of King Lothar and Queen Theutberga (Manchester University Press, 2016).