The Greatest Library Before Alexandria

The bronze-age city of Mari was second only to Babylon, and the library of tablets it held offers rich insight into all aspects of an intricate political world. 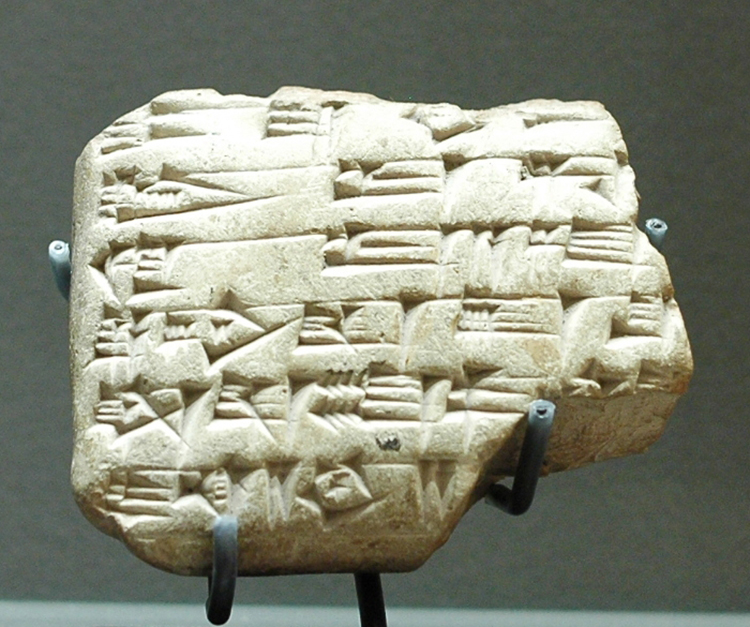 Much has been written about the Islamic State’s destruction of Nineveh in Iraq and Palmyra in Syria, but other sites of paramount historical importance have suffered. Such is the case for the Syrian city of Mari, which throve during the Bronze Age under the rule of King Zimri-Lim and was second in status only to King Hammurabi’s Babylon among its contemporaries. The palace at Mari has yielded one of the greatest caches of ancient political correspondence, providing invaluable archaeological insight into the international politics of the early second millennium BC.

At Mari, one report from war archaeology surveys has found that 1,286 pits – evidence of looting activity – were dug in just seven months between 25 March and 11 November 2014. The primary target was Mari’s spectacular royal palace. The modern region in which Mari is located – Deir ez-Zor – is currently a site of explosive violence. In recent years, ISIS has destroyed hundreds of thousands of invaluable manuscripts in libraries and other institutions of learning across Iraq, with the justification that many historical documents or artifacts represent pre-Islamic culture that it deems polytheistic or idolatrous.

Founded around 2900 BC on the western bank of the Euphrates River, Mari was located at a trade crossroads between Syria and Mesopotamia. An early example of urban planning, complete with irrigation canals and a reservoir, it grew in prominence over the next millennium, expanding around 2000 BC. It reached its zenith in the 18th century BC, when, in 1775 BC, Zimri-Lim, the last king of Mari, assumed the throne. After marrying the daughter of his patron, the king of Yamkhad, a Semitic kingdom centred on Halab, Syria (ancient Aleppo), Zimri-Lim further solidified ties by marrying his children to foreign monarchs. His daughters kept up diplomatic correspondence with their father, providing him with a widespread intelligence network. He also allied himself with the powerful king of Babylon, Hammurabi, whose sons often visited Mari.

Thanks to Zimri-Lim’s network of alliances, Mari enjoyed a peaceful period. Its economic prosperity, due to trade and the production of textiles, allowed Zimri-Lim to expand the existing royal palace to 260 rooms, spread over 100 acres, adding frescos depicting historic events like his coronation. His architects built a stunning fountain in the shape of a goddess holding a vase of water, which was discovered in fragments and has since been reassembled; the fountain served as both a pleasing ornament and a religious manifestation of fertility imagery.

In this palace, the contents of which were excavated in the 1930s, archaeologists discovered records and official correspondences, which were part of one of the earliest extant political archives. Other smaller archives have been found at other cities, providing evidence that kings did not rule in a vacuum; they exchanged information, solicited it from informants in order to best educate themselves and recorded it for posterity. Zimri-Lim and his government documented contact with foreign monarchs in an extensive library; over 22,000 tablets, mostly written in Akkadian, the ancient Near Eastern diplomatic lingua franca, were discovered. On these tablets, Zimri-Lim recorded alliances with other cities. Written copies of treaties were distributed to both parties, outlining terms, invoking gods as witnesses and including curses to prevent both parties from violating those agreements.

Around 1762-61 BC, Zimri-Lim’s ally, Hammurabi, marched on Mari. He sacked and destroyed the city, effectively removing it as a significant power from the world stage. Besides taking Zimri-Lim’s treasures, his soldiers also took some of the contents of the Mari archive. As Assyriologist Marc van de Mieroop has written in King Hammurabi of Babylon: A Biography, the Babylonians inventoried the tablets, seized much correspondence between Mari and other cities, which they took home to Babylon, and abandoned the remaining tablets in the ruins of the destroyed palace. The 20,000 tablets left behind were excavated millennia later, in the 1930s, mostly in situ.

The remaining tablets from the Mari archive – the contents of which mostly date from the last century of the city’s existence, perhaps due to increased recording of diplomatic activity during this period – include thousands of letters sent to the king by different authorities and shine a light on relations with other Levantine and Mesopotamian powers. The documents that were not letters were mostly legal, economic, political, religious and administrative and show the ways in which monarchs interacted with one another, whether militarily or diplomatically.

This archive was outstanding in terms of its scale at this point in time; while there are archives of comparable or even larger size from earlier centuries, few have been published in their entirety. The Mari tablets reveal intricate negotiations and power dynamics between kings of city-states and focus on relations between nomadic tribes and non-nomadic groups. Indeed, as Matthew Battles noted in Libraries: An Unquiet History, it is not until the seventh century BC that there was a widely known and translated archive of comparable size (a multilingual and multi-genre collection organized by Ashurbanipal II in his capital of Nineveh) in Mesopotamia.

Many of the tablets to survive are correspondences between royal authorities in Mari and their allies and enemies, including negotiations of dynastic marriages and the corresponding exchange of gifts. The only reason we know so much about the political and personal affairs of Mari and its allies is due to the extensive correspondence preserved in the archives. For example, a series of fascinating personal correspondence reveals some serious trouble in the royal clan of Mari.

From these letters, we learn that Zimri-Lim married one of his daughters, Inibsharri, to a conquered vassal who already had a family; he insisted that Inibsharri be made her new husband’s chief wife. But when Zimri-Lim went home, his new son-in-law restored his first wife to her role as queen. Inibsharri wrote angrily to her father, complaining that her rival took all the presents given to her husband for herself and that Inibsharri herself was shut up in the palace like a nobody. Zimri-Lim told his daughter she could return to Mari if she really wanted to; Inibsharri took him up on the offer, but went to a different nearby city instead of her father’s palace.

From these same library sources, we know that Zimri-Lim appointed another daughter, Kirum, as governor of one of his vassal towns called Ilan-Sura. However her husband, Haya-Sumu, also claimed the same role. The newlyweds butted heads over who was in control leading to Kirum receiving death threats from her husband. Haya-Sumu feared she was more loyal to her father than to him – in fact, she did send home lots of local news to her father.

Compounding the problem, Zimri-Lim had already married one of his other daughters, Shimatum, to Haya-Sumu. Kirum was neglected in favour of Shimatum, who jockeyed with her sister for power. Complaining to her father that courtiers no longer sought her royal opinion and that Haya-Sumu deprived her of the company of her ladies-in-waiting, Kirum threatened suicide, but when she disobeyed her husband, Haya-Sumu said, ‘If you do not come with me, I will kill you with a bronze dagger and go.’ Zimri-Lim’s official in Ilan-Suri told his king that he feared for his daughter’s life, so Haya-Sumu divorced Kirum, who returned to Mari. The political implications of this are not immediately obvious, since Haya-Sumu was still married to Shimatum, Zimri-Lim’s son-in-law, but one suspects that domestic matters in the royal household of Ilan-Sura were much calmer after Kirum’s departure.

The reason for the souring of relations between Mari and its biggest ally, Babylon, are unknown. Perhaps Hammurabi wanted Mari’s wealth and control of trade routes, arable land and water supplies, or they came to blows over territory they both coveted. One archived letter from Zimri-Lim asked his wife, Queen Shibtu, to consult oracles to discover if Hammurabi would attack; Shibtu responded that oracles indicated Zimri-Lim would defeat the Babylonian king. Sadly, that was not the case.

Today, the archives can be found in the Louvre in France, as well as Syrian museums in the cities of Aleppo, Damascus and Deir ez-Zor. The fact that many artifacts of such extraordinary significance still reside in Syrian museums – despite colonialist attempts to plunder others’ cultural heritage for their own gain, as well as ISIS’s efforts to obliterate the very same gems – is remarkable. The Mari tablets still stand as witnesses to the survival of the knowledge in the face of modern adversity.

Carly Silver is a writer, editor and historian, who has written for the Smithsonian, the Atlantic, Atlas Obscura and Archaeology. @CarlyASilver