A Brief History of Facts

The rise of ‘the fact’ during the 17th century came at the expense of the power of authority. Could the digital age reverse how we decide what is true and what is not? 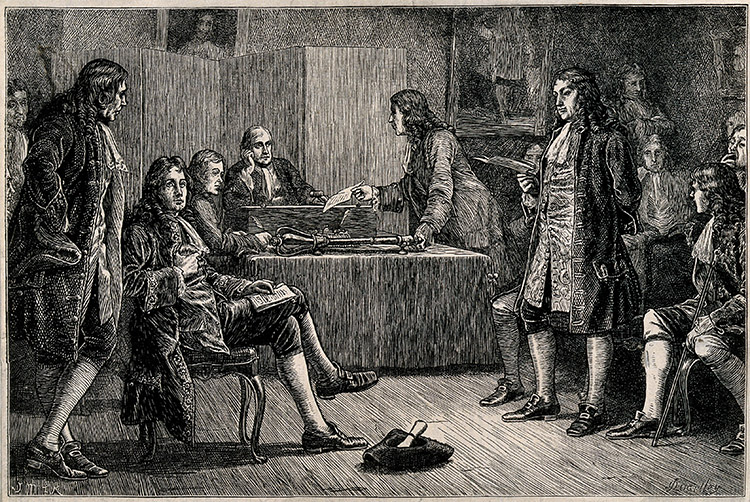 The concept of ‘the fact’ first appears in Renaissance Latin, but the word only entered common usage in the 1660s. The Royal Society, founded in November 1660, was dedicated to experimental knowledge and declared that it would concern itself with ‘facts not explanations’. ‘Facts’ became part of a modern vocabulary for discussing knowledge – also including theories, hypotheses, evidence and experiments – which emerged in the 17th century. All these words existed before, but with different meanings: ‘experiment’, for example, simply meant ‘experience’.

Alongside this new conception of facts, a philosophical discussion developed about what they actually were. David Hume (1711-76) was the first ‘philosopher of the fact’. Hume argued that facts belonged in a separate category from ‘necessary truths’. It is necessarily true, for example, that all the angles of a triangle add up to two right angles. Facts, on the contrary, are contingent rather than necessary: that is, they could be otherwise. My name is ‘David’. My parents could have called me ‘John’, so it is a fact that I am called David. That facts are true is their most peculiar feature. You can have alternative theories and hypotheses, but not alternative facts. Facts that are successfully disputed cease to be facts, while theories that are successfully disputed continue to be theories.

That true statements about the real world have always existed is beyond dispute. But the categories into which we place such statements have not always existed. People have always been concerned to get what we call ‘the facts’ right. The astronomer Johannes Kepler (1571-1630), for example, went to great lengths to get precise measurements of the location of Mars in the sky so he could calculate its orbit not approximately but exactly. In order to explain this obsession he had to use a Greek phrase: he wanted to find out to hoti – that which is.

But if true and precise statements are not new, why does the word ‘fact’ – and its definition as something that is true – matter? One reason is that before there were facts there were authorities. If an important Greek or Roman author said the Babylonians cooked eggs by whirling them round in slings; or garlic disempowers magnets; or diamonds cannot be crushed into powder; or boats float higher in the water when they are farther from land; or the nerves originate in the heart, then this was considered to be necessarily true. In the course of the 17th century claims like these were routinely dismissed. For example, Galileo said: we have eggs, slings and strong young men. If we cannot cook eggs by whirling them round in slings then we can be sure the Babylonians could not. The key point about facts is that they trump authority: President Trump saying that the crowd at as his inauguration was the largest ever, cannot make it true.

Indeed, before the invention of the fact, what we would regard as entirely illegitimate arguments regarding contingent true statements were held to have some validity. Thus, under Roman law, rumor and fama might help to prove guilt: gossip, hearsay and reputation could be introduced in court and could determine the outcome. The value of your evidence depended on who you were as well as what you knew: the evidence of a man was preferred to that of a woman, of a gentleman to that of a labourer. In English law, the jury in the 17th century was still supposed to use its own local knowledge to decide the case.

Why did authorities decline and become replaced by facts? In the 17th century the nature of information changed: as information became more reliable, authority became less so. New rules were established as to how to judge whether information was accurate: eyewitnesses became crucial; experiments had to be repeated; reports had to be cited and compared. The impact of the printing press drove this new scepticism, with vast amounts of information available for the first time. Sources could be accurately cited and new, accurate information could displace old, inaccurate information. Facts developed with a conviction that knowledge could progress. When Galileo was a professor in the 17th century he was required to teach astronomy from a 13th-century textbook. Even at the end of the 17th century, professors in Oxford were supposed to teach natural philosophy from the texts of Aristotle. These antiquated authorities originated in a manuscript culture which was swept away by print.

We now live in a digital age, in which information becomes fluid and variable. All that was solid has melted into air. In the print world, getting your facts right was about competence and care; now what the facts are depends on what date you access a website, or which website you visit. The nature of information has changed irreversibly.

On Tuesday February 7th I listened to an appeal court hearing on President Trump’s executive order banning travel to the US by people from certain countries. One issue was whether the ban was intended to discriminate against Muslims. Opponents of the ban cited newspaper articles quoting Donald Trump (before he was elected), which they claimed proved the true racially charged motives underlying the order. Lawyers for the government said it was inappropriate to use newspaper articles to contest an executive order made by the president. The judges asked if the government intended to introduce evidence to show the newspaper articles were false. They did not. They wanted simply to brush them aside. They wanted the court to be confined to the text of the executive order and insisted it should not look beyond that text. They wanted an appeal to the facts to be ‘trumped’ by an appeal to authority.

Why is this happening? Because, it seems, we no longer trust the facts. The president tells us we cannot trust the mainstream media, while that same media says his supporters peddle fake news. For the first time there are facts and (in Kellyanne Conway’s notorious phrase) ‘alternative facts’. As facts become fluid they become contestable; the truth becomes (once again) something you assert, not something you prove. It used to be a peculiar characteristic of totalitarian regimes that they made the facts fit their purposes; now it seems this can happen in a functioning democracy. As the court pointed out in its judgement on February 9th, the government had repeatedly asserted that national security was at stake and that this was why its order should not be stayed, though it had produced no evidence to support this assertion. The courts appear to be trying to preserve standards of reliability and evidence that are being undermined in the digital age. Will they succeed? Only time will tell.

David Wootton's most recent book, The Invention of Science, is published by Allen Lane.