What was the original purpose of an idea now threatened by a dire need for housing? 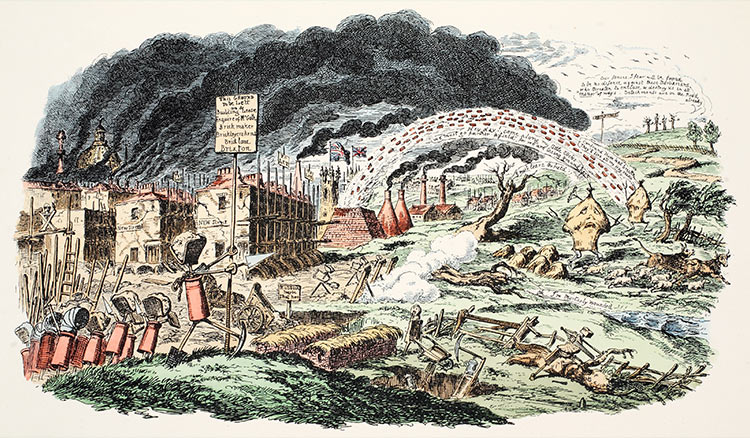 When Britain’s coalition government set out to simplify the planning system in 2013 it was clear that they also hoped to make life easier (and more profitable) for developers. Ultimately, this approach came back to bite them in the Green Belt: it antagonised core voters and policies were repackaged rather than appear as an actual U-turn, leaving local councils to take the flak.

A number of elements combined to produce this problem, which will continue to cause headaches for the current Conservative government. For decades, planning authorities were required to have enough land allocated for new housing to meet the expected demand for five years, but there was little sanction on them if they did not. On top of this, there was the removal of guidance for calculating the number of new dwellings needed. Consultancies moved into this vacuum and, using opaque methods, have come up with higher figures, which make it harder for councils to find enough land, leaving them open to hostile planning applications from developers. In some areas the result has been councils ‘rolling back’ the Green Belt (in other words, introducing plans to build on it). As Britain’s, and especially England’s, population increases there is a dire need for more housing.How much and where is less clear.

So what was the original intention for the Green Belt? It was not part of a vision of idyllic countryside dappled with the homes of the bourgeoisie using the much-expanded dwellings of farm labourers; rather, it was meant for a very different purpose and for a much wider cross-section of society. Inevitably, though, the open land around any metropolis will become a destination for wealthier homeowners, regardless of whether it is classified as Green Belt.

The appreciation of green areas around towns as potential recreational refuges has been long seen. In the 1820s the pioneer landscape architect J.C. Loudon envisaged cities as consisting of a series of concentric rings of buildings and open, green areas. The role of these green areas came to be fulfilled by the parks that characterised Victorian cities. By the end of the century, with the availability of rail transport, campaigners for green spaces were setting their sights further afield – the open rural countryside was their destination, but this was an ever-receding goal.

The architect and town planner Raymond Unwin may have been responsible for the term Green Belt in the 1920s. For him it was to be a linear buffer zone between the commercial zones of towns and their residential areas. He was also concerned with the efficient use of land and feared that ribbon development along roads would make the backlands inaccessible for further growth. He could not have foreseen the countrywide inflation in land value over the latter part of the 20th century, making it viable to demolish ribbon development to open up the land behind.

In the 1930s a Green Belt was created around London by the city’s local authorities who bought land. However the 1947 Town and Country Planning Act created a viable ‘planning permission’ system, which provided a cheaper alternative to purchase that could easily be applied to far larger areas. The aim of Green Belts created under this new system was, as set out in a circular of 1955, to contain towns and, especially, metropolises like London. This is why new towns have been built as overspill beyond the Green Belt. But, in contrast to Unwin, the aim was not to treat Green Belts as long-term land banks. It was about resisting pressure to build. Almost throughout its life there have been calls to reduce the Green Belt and allow building in that space.

So should the Green Belt still be protected? It might seem hard for a modern environmentalist, faced with the tasks of creating sustainable living spaces for a growing population, to defend these enclaves of prosperity and still harder for social reformers, but there are profound arguments in favour of Green Belts, in particular, their original role as ‘open spaces’ for exercise, to use the late 19th-century terminology, and as the ‘green lungs’ of the late 20th-century. While not all of the land is especially scenic, it is its undeveloped character that is important, even though it is not necessarily a ‘wild Romantic beauty’.

More significantly, in spite of the intensity of modern agriculture, the Green Belt is a wildlife resource. It remains vital, not just for the ecosystem services that it provides for humanity, but also for the natural world’s intrinsic right to exist. In these times of climate change, it is also essential that linked green areas are retained to provide corridors for animals and plants to migrate as their climatic niches move.

The ever-growing calls to build on the Green Belt in order to solve a very real housing shortage are based on erroneous assumptions: new building does not have be on greenfield; there is plenty of brownfield, which, although less profitable, is suitable for re-use. It is also wrong to assume that housing demand is location specific. Much of the demand is due to migration into the South-east and London (domestic and from overseas). Given the right incentives, people will move to new regions, but promoting other areas requires government policies based on strategic economic thinking.

Responding to the demand for housing by abandoning the Green Belt to development is the easy solution. The Green Belt may not have turned out quite as it was planned, but it is increasingly used for urban recreation and, if protected, could be of ever greater environmental value.

Raymond Smith is an environmental historian with a particular interest in brownfield policy.