The life and legacy of a woman who sacrificed everything for her cause. 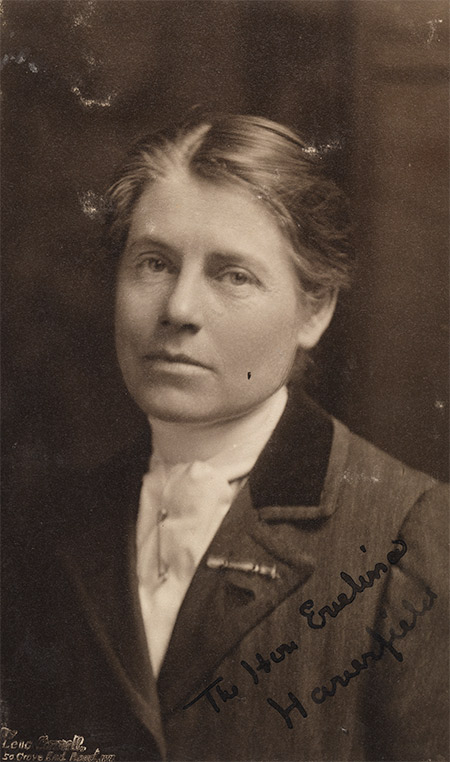 To come across a headstone engraved in English standing over a well-tended grave by the local church in a remote provincial town in Serbia is a surprise. Somewhat misspelt, it reads:

Hear lies the body of the honourable Evelina Haverfield youngest daughter of William Scarlett 3rd Baron Abinger and of Helen ne Magruder his wife of Inverloky Castle Fort William Scotland who finished her work in Bajina Bashta March 21st 1920 through the war 1914-1920 She worked for the Serbian people with untiring zeal. A straight fighter astraight rider and a most loyal friend. R.I.P.

Evelina Haverfield was the recipient of the highest Serbian award: the Order of the White Eagle. Born in 1867, she married Major Henry Haverfield at the age of 19 and continued to use his name even when, after his death, she married his fellow officer, John Blaguy. This was not a happy union and after some time they drifted apart. The rest of her life was informed by devotion to a cause.

She became an enthusiastic supporter of the suffragette movement and was arrested during suffragette demonstrations in London for hitting an escorting police officer. Her only regret was not hitting him hard enough, promising to bring a revolver next time. During that heady time she met Vera Holme. Their companionship was to last the rest of her days.

At the outbreak of the First World War the suffragettes supported the war effort by founding a Women’s Voluntary Emergency Corps and a Women’s Voluntary Reserve Ambulance Corps. Evelina became commandant in chief of the latter, looking, it was said, every inch a soldier in her khaki uniform, although she later left after a disagreement of an undisclosed nature.

During the war Evelina volunteered as a hospital administrator in the Scottish Women’s Hospitals, whose aim was to provide medical care for wounded allied soldiers wherever they served. Her unit was sent to Serbia. On arrival they found untold misery caused by war atrocities and a raging typhus epidemic. The all-female unit was met with scepticism by the local military, but their attitude changed to respect once they saw Evelina’s skill with the cavalry horses. She went on to ride with the best horsemen of the Serbian army.

The defeat of the Serbs and a forced return to the UK did nothing to diminish Evelina’s enthusiastic support. By now Serbia was her cause.

A new transport unit was sent to Serbia via Russia, with Evelina its commander. It comprised 75 women noted for smart uniforms and shorn locks. Evelina herself was described as small, neat, aristocratic in bearing, eliciting devotion in some and scepticism in others. Her unit drove into the fighting areas, collecting wounded and exhausted soldiers. It earned Evelina a Russian military medal for bravery.

Bravery notwithstanding, her haughty character led to another dismissal. But her enthusiasm for the Serbian cause continued undiminished: once in the UK, she, with Flora Sandes, established a Fund for Promoting Comforts for Serbian Soldiers and Prisoners.

After the end of the war she, with Vera Holme, returned to Serbia as commissioner of the Serbian Red Cross Society in Great Britain. On her own initiative she began to look for a suitable location for Serbian orphans. The mountain village of Bajna Bašta was chosen, the choice dictated by its dire poverty and numerous memorials to fallen soldiers. She managed to place about 100 orphans in a house with a café, which still stands. Its last survivor wrote in a local paper of her devotion: ‘My family was hovering between life and death when Mrs Haverfield arrived and brought me and other children to the converted café. She spent all her money on the children.’ Driving between villages she treated the sick children or brought them back to the orphanage. A year later, aged 52, she caught pneumonia and died. She was buried with full military honours. The offices and shops closed that day and all the inhabitants of Bajna Bašta attended the funeral.

Today the landscape gives no clue of the ravages wrought by the war, which would have been familiar to Evelina Haverfield. A splendid, ultra-modern house overlooking the river Drina stands on a hill where once fierce fighting took place, a testimony to modern architectural flair and budding prosperity. Only the undulating ground betrays where once were trenches and gun positions, while the tragic consequences of war are commemorated here and there by a lichen-covered headstone or a monument.

The work started by Evelina Haverfield continued after her death. A British medical mission remained until 1922 and was followed, first, by the centre for the poor, headed by Serbian doctors and, then, by a hospital, where a commemorative plaque to Evelina Haverfield hangs in the main corridor.

Nearly 100 years later the esteem in which she is held in the town is undiminished. In 2012 two local priests who look after her grave and the museum housing her memorabilia proposed a shelter for the homeless bearing her name. In August 2014 a new plaque was unveiled at the entrance to the museum in the presence of the British ambassador and Serbian dignitaries, a fitting tribute to a remarkable life.

Magda Czajkowska is a writer and historian specialising in the Balkans.