The Celts: Blood, Iron and Sacrifice

A new BBC series fails to give its subject the depth it deserves. 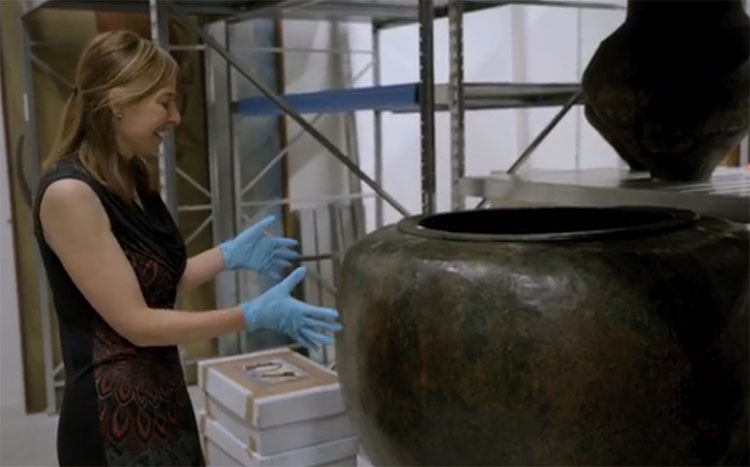 This week BBC Two screened the first episode of The Celts: Blood, Iron and Sacrifice, hosted by Alice Roberts and Neil Oliver. The Celts is a subject I’m currently immersed in. Two weeks ago I was at the opening reception of the new exhibition at the British Museum, and I’m currently writing a big piece on Early Iron Age society in Europe for the new OUP handbook. I do hold a bit of a candle for Neil Oliver – I advised on an episode of one of his programmes just on the off-chance I’d get to meet him – and I also have huge respect for Alice Roberts, so I was expecting a lovely hour being told all about all my favourite time period, by two of my favourite presenters. Sadly I was disappointed.

Back in 1989, Iron Age specialist J.D. Hill wrote a short piece entitled ‘Rethinking the Iron Age’. I continue to love this article, and I still make my students read it. It represents a watershed in how we approach the pre-Roman Iron Age. In it, our traditional, romantic notions of ‘Celtic’ society are gently picked apart. It offers instead a brave new world where Iron Age archaeologists can stop being the handmaidens of history – moving from ‘as Caesar tells us..’ and the tired repetition of those political anthropologies – to understanding Iron Age people from the archaeology.

As archaeologists, we collect the evidence that past people left behind; almost forensic now in our method. We sift through their rubbish, look inside their houses, walk their landscapes, and respectfully observe their mortuary traditions. We discover their gender norms, their social identities, the impact of climate change, and all manner of wonderful things.  We can write from this evidence – as O.G.S. Crawford suggested in the 1930s – a social archaeology; a history of all Iron Age people; a story of men, women, and children – high status and low. We can write their story.

So as one of this brave new generation of archaeologists, I was admittedly surprised – perhaps naively – when this story of my beloved Iron Age, opened with Rome. [Sighs deeply]: Will the Iron Age people never be free of Rome?

I discover that I am firmly before the 1989 watershed. I am to be treated to ‘a common culture that stretched from Turkey to Portugal’. If we’ve learned anything in the last generation of study, it’s that Iron Age Europe was by no means a common culture. Diversity in culture can exist between one side of a river and the other; between one side of Germany and the other – whilst we have great riches in Austria, we have a marked dearth of material in Britain. So this introductory claim of a ‘common culture’ made me distinctly nervous. I suddenly seemed to be finding myself in the 1960s.

Having moved on from Rome, we were now in the 4th century BC of the Roman historian Livy. With ‘mysterious, and enigmatic’ tribal Celts, seemingly endlessly migrating to Italy.

And if they’re not migrating, I learn that Celts are fighting. And that they were all men; which is odd because in some regions, at some times, the archaeological record distinctly tells us that Early Iron Age society was really more to do with the power of women. Maybe the female rulers of the late Hallstatt period will be in the next episode. For now, I’m learning that the Celtic hordes were male, that the iron workers were male, and that the leaders were male. I always wonder when I encounter these utopian masculinist visions of my period, how these men reproduced. I resolved, on watching this programme, that perhaps they do it as worms do. Anyway, I think we should be told.

We began in the La Tène period (beginning at 450 BC) which I found quite confusing as the Iron Age begins 350 years before this. Luckily I understood the chronology, sadly I’m not sure how many viewers would have been with me on that. It’s not until 18 minutes in that we get to the site of Hallstatt – as Oliver rightly says the ‘ideal starting point for any investigation of the Celts’. But, Rome.

The interview at the Hallstatt salt mine was good – drawing out recent osteological work that revealed that it was the Iron Age salt miners themselves who were those buried with some really quite extraordinary wealth. This simple fact challenges our fairly normative, and oft-repeated, ideas about how later prehistoric society worked. This is important stuff. We also heard about the women miners of Hallstatt, although we didn’t hear that their bicep development was greater than that of their men! Sadly the social implications of this amazing site remained rather under-developed. We did learn about salt, however, followed by a slightly awkward segue into iron. Well, it is the Iron Age.

What we also didn’t learn about Hallstatt was more about the people in those graves. We saw their grave goods, but we didn’t learn anything about the stories those grave goods can tell us – about trade and the connections to Slovenia and to Italy, the fact that the wealth is distributed equally between the men and the women, that children were also buried. That as the community progressed, the richest grave was of a high status woman with what looks like a golden ornamental sword. The stories we could tell. Instead, we hear that Hallstatt culture ‘spread across great swathes of Europe’ – which it didn’t really, not like that anyway – and that this culminated in the Celts from France arriving in northern Italy. And so, we’re back to Livy. Cue dramatic scenes, of men.

Right. Then I got a bit cross. Because we were told that hillforts were ‘Iron Age castles that were the homes of chiefs’. I don’t really know where to begin with that. We could start in 1989, and the last two and a half of decades of scholarly work maybe? I learned too that Heuneburg was a city. That it was a city. We did hear about the social networks of this site, and we got to see the grave goods of Hochdorf up close and personal – a really beautiful segment, which left me profoundly jealous. I’d never realised there was coral inlay on the castors of the Hochdorf couch, or that there were tiny horsemen on the gold neck-ring. And we got to the drinking and feasting culture – this was good.

Then suddenly, from 530 BC, we were on the road tracking Celtic origins in the 7th century BC – with an interesting segment with John Koch. And here we have a narrative twist, because – having been told the story of migration and cultural diffusion for three quarters of an hour – ideas that went out of fashion in British archaeology perhaps fifty years ago – suddenly John Koch says cultural diffusionism ‘simply doesn’t work’, and we hear how the Atlantic Celts were actually Bronze Age, as evidenced by Gündlingen swords. Even knowing the period, I’m still confused by this late twist.

It’s okay though because it turns out we’ve simply strayed too far from the historical texts. We’re once more with Livy in the 4th century BC – interspersed with a nice section on carnyxes or war trumpets (which incidentally are Late Iron Age) with the brilliant Jon Kenny who tells us what it’s like to play one. We end on the Celts finally completing their travels by reaching Rome, and we are treated to lots more dramatic scenes, of men. The conclusion is that Iron Age people were not wild savages, but had a tribal network, a shared language, and had expanded across central Europe. Well, I’m glad all that’s now clear. Despite Koch’s best attempts, cultural diffusionism is still with us.

In the end I wondered whether all the different segments had somehow been dropped on the editing room floor and hurriedly been picked up and shuffled back together, in the hope that nobody would notice. I’m not sure how else we explain the jumping around from early La Tène migrations through the late Hallstatt period, then back to the 7th century BC, to the 4th century BC – with a brief look at Late Iron Age trumpets – before ending, where else but in Rome. And we hear that next episode we’ll jump forward 300 years as we head for the 1st century BC, and who else, but Caesar.

I’m left with the profound sense that archaeology is still only really being used to illustrate the history. So, because I began my archaeological career after 1989, I’m disappointed. This isn’t archaeology for me. It’s history with trinkets. There has been so much excellent archaeological research done in the last few decades for this period of the European past. Arguably, we’re at the point now where archaeology as a discipline can actually begin to re-write our history of Iron Age Europe. I’m disappointed that this programme didn’t seize the opportunity to tell that story.

It has to be said that the presenters are great. I really do appreciate what they do. It’s just a shame they didn’t have better-researched material with which to do it. What the programme does do remarkably well is to show us the artefacts: the grave goods of Hallstatt and Hochdorf, and the section on the Hallstatt mines was fascinating. This does exactly what TV archaeology does best – capturing that air of discovery. It’d be nice now if, instead of us gazing in wonder at beautiful things, we started speaking to the people who are analysing what they actually mean.

Maybe the specialists are in the next episode. In the meantime, I recommend you get down to the new Celts exhibition at the British Museum – there until 31st January 2016. Well researched and with a strong narrative thread – and presenting the latest thinking on the Celts – this exhibition really does bring Iron Age Europe to life. I can't help thinking that if the undeniable presenting dream team of Oliver and Roberts had only teamed up with their equivalents in the world of Iron Age curators – Julia Farley and Fraser Hunter – then this would have been a very different review.

Rachel Pope is Senior Lecturer in European Prehistory at the University of Liverpool. @preshitorian