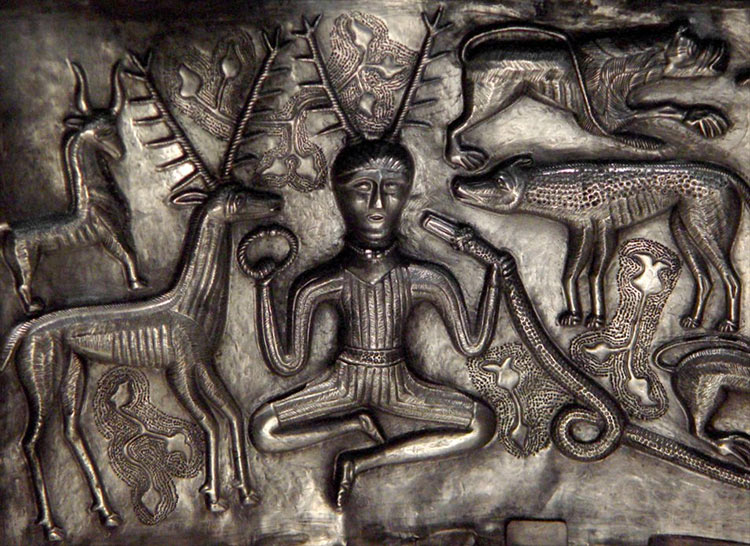 Celts: art and identity is an exhibition of shifting patterns. What we now think of as ‘Celtic’ – an image formed thanks to later nationalist feeling and Victorian romanticising – was a fluid concept under influence from all sides, across time and geography, in one big melting pot. The people we now call Celts did not see themselves as a unified culture – a point that is rather hammered home – but that is not to say that such a grouping is meaningless. The exhibition seems devoted to grappling with this dichotomy.

To the average punter confronted with a display of torcs from sites across modern Europe – from Shetland to Southern Italy to the Baltic – it is hard to deny a shared culture. While we are told that the collection shows a variety of regional styles the group of torcs found in Denmark alone could not be more different from each other. Without more information, how can we tell the difference between regional style and personal tastes? In only one display is this made clear; in a selection of brooches specific features are identified as being typical of Shetland and the regional difference becomes immediately apparent.

That said, the exhibition excels at showing the fluidity of Celtic culture. Celtic and non Celtic artefacts sit side-by side: helmets, bracelets, hanging bowls. Later, as the Victorian reconception and appropriation of Celtic art and culture is highlighted, their reimaginings and recreations sit comfortably alongside Hiberno-Saxon and Romano-Celtic art. This is a story of influence, sharing and adaptation.

All aspects of society are covered: war, religion, home-life, although there is little mention of children and family, or social hierarchy. These are aspects of life less likely to leave enduring remains. And, while there is little mention of women in warfare, elsewhere women’s clothing, position in society and roles in hosting are given ample space. The majority of objects are presented as gender neutral. Although the big arm cuffs worn by heavily muscled warriors are a surprisingly visceral and masculine exception.

All these aspects – religion, home-life, converging cultures – seem to come together in the Gundestrup Cauldron, which, alone, is worth the trip. It is striking for many reasons. First, its sheer size. It is physically imposing; a viewing platform is needed to see it in its entirety. Its decoration is also notable: the art is not abstract knotwork, rather it is covered with figural, narrative scenes. The origins of the cauldron are unknown (possibly western or South-Eastern Europe) but the decoration shows many different influences: one scene might be a representation of Hercules.

Elsewhere, the art styles range from abstract to naturalistic realism. Humans and animals are stylised but recognisable, and are filled with character: fat, dancing ponies; serene ducks; fighting dogs. The craftsmanship required to make these objects is ingenious. An explanation of the construction of twisted gold torcs alongside examples of much-loved objects which have been repaired and stuck back together with gold (the Celtic Sellotape) make them shockingly human.

The exhibition closes with the Celts’ modern legacy, born from the Victorian rediscovery of them in Classical texts and their attempts to identify and define them as the romantic savage. With the benefit of the rest of the exhibition it is very easy to see how we have arrived at our modern Celtic image and the continuity and disconnect between it, and the complex and shifting cultures seen in the artefacts. As the exhibition declares, 'We are dealing here with a connected world, not just a Celtic one.'

Celts: art and identity is at the British Museum until January 31st, 2016.