Can MOOCs offer anything new?

Massive Open Online Courses enable educators to connect with a learners on a huge scale. 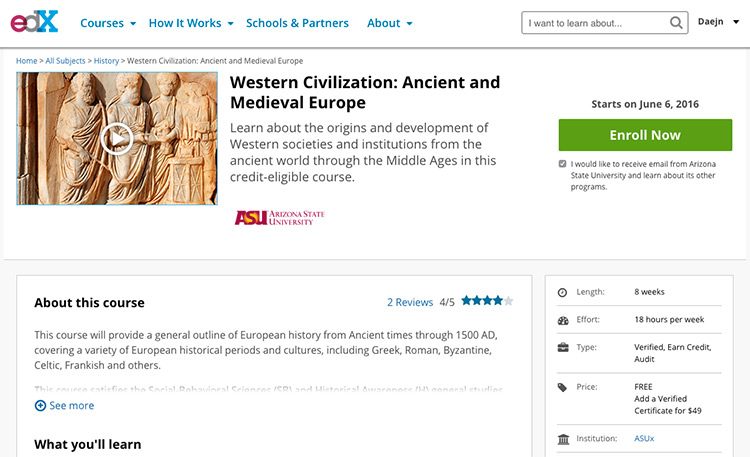 Why do we care about history? Can it teach us anything of relevance to the modern world? For most of us, how we imagine history is shaped by the modern mass media. Television and the heritage industry provide us with narratives that define who we are, or think we are. Many of these narratives deal with the history that has made our ‘nation’ what it is today. Occasionally, history is also treated as a warning: it tells us how to avoid becoming what we do not want to be. That is why ‘difficult histories’ are so prominent on our screens and in our museums: that of Nazi Germany, in particular, but histories of Empire, slavery and other forms of inequality continue to attract attention. Yet academic historians often argue that history cannot be distilled into a single lesson: the past is a different country and provides no simple ‘how to’ guide for the present.

Over the last few years, the emergence of a new medium has created opportunities to take a fresh look at this problem. It is the MOOC, which stands for Massive Open Online Course. Platforms such as Futurelearn in the UK, or edX in the US, enable academics to engage directly with large international audiences of learners. Futurlearn’s MOOCs are free; US platforms tend to levy a modest charge. There has been much excitement, as well as, inevitably, scepticism, about MOOCs’ potential to bring academic research to publics who, because of time or financial constraints, would not otherwise have access to a traditional university course.

History is a popular topic in this medium. While some MOOCs serve more practical or vocational training purposes, there is a large public appetite for learning about the past through this medium. So does this change the way we view, and use, history? A recent, successful MOOC on ‘Propaganda and Ideology in Everyday Life’, which attracted 10,000 learners from over 20 countries, was not just ‘about’ history: it explored how and why history matters in the way we think and act politically.

Research shows how effective propaganda builds on what we already think, feel and, perhaps most importantly, imagine as ‘natural’ in politics. The values we hold in our everyday lives are the building blocks of political arguments, so to understand ideology and propaganda, we need to start at the grass roots.

Take freedom, for example. It is important across the political spectrum. Liberals and neo-liberals tell us that they will defend individuals against encroachments of the state, while socialists promise to free people from the shackles of social and economic inequality. To justify their claims to being the authentic champions of freedom, all such groups point to history. Freedom is often associated with the historical emergence of the nation-state, from the American Declaration of Independence to 20th-century anti-colonial struggles in Asia and Africa. But freedom has also been a powerful weapon against the state, exemplified by charismatic ‘freedom fighters’ such as Nelson Mandela or Malcom X who still capture the imagination today. When people speak of freedom, they invoke these histories – and often more than one. There is no uniquely American idea of freedom, nor a uniquely liberal one: different ideas have emerged in conversation with one another, are deeply entangled, and when it comes to defining political values, people draw inspiration from more than one history.

By presenting this topic as a MOOC such entanglements are made more visible. Instead of one historian presenting one storyline, learners experience a series of learning steps – short films and short readings – each introduced by an expert on a different place and period of world history. And each step is followed by an intense discussion: learner comments totalled over 30,000 at the end of the first round. The experts come from seven different disciplines – History, Politics, Media Studies, Psychology, Classics, Art History and Area Studies – and work and research on four different continents. What emerges from their conversations with the learners is not a single story, but a web of connected histories and presents.

The evidence discussed is not just what we may read in history books: learners themselves provide the material on which the course reflects by sharing their own political views and the histories that inspire them. Images are as important to this process as words. Each week, learners are invited to upload one image – anything from a famous press photograph to a personal sketch – that best encapsulates a particular value for them. In the first round of the MOOC, images of freedom mostly showed either an iconic freedom fighter or an image of nature. Each expresses something distinctive about freedom: it is not a given, but the outcome of a concerted effort or struggle; and nature is a place from which we can perceive and criticise how man-made spaces erode freedom, through political oppression, surveillance or social conformism. Nature in these images is, however, not ahistorical: the pictures reflect traditional Romantic representations of nature as a wild yet sublimely ordered realm, from which we can draw political and spiritual inspiration.

Sharing and debating each others’ ideas and images in this MOOC forum led to the learners rethinking the very idea of ideology. Many had started with an assumption that it was a ‘bad thing’, a dogmatic way of thinking associated with repressive political regimes. But in creating mental maps of personal values, tracing their connections and reflecting on what draws us to particular historical words and images, learners grew sceptical of the idea that people naturally stand ‘outside ideology’ unless forced into it by a regime. Learner comments’ showed that they came to associate ideology and politics much less with ‘propaganda’, ‘brainwashing’ or ‘repression’ and more with ‘values’, ‘ideas’, ‘beliefs’ and even lifestyle choices.

This opens up exciting opportunities for approaching the relevance of history in new ways. As a profoundly pluralist medium, a MOOC enables people to experience the relevance of history in their own conversations with those who live in different places and who adhere to different political beliefs. Many participants commented that the course made them more aware of their own role as global citizens, narrowed the gap between formal politics and everyday life and showed how politics is always shaped by histories.

Maiken Umbach and Ian Cooke are the convenors of the ‘Propaganda and Ideology in Everyday Life’ MOOC. Registration is now open for its second version, beginning on May 16th, 2016.