Calais has come to represent the extremes of the current migrant crisis, in what is only the latest stage in its long history of migration – in both directions – across the Channel. 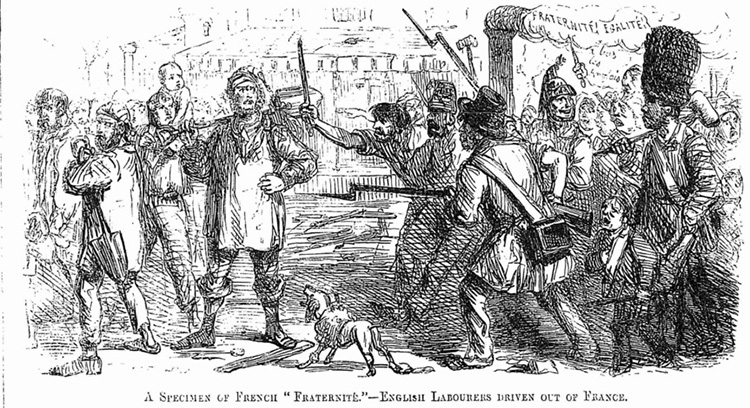 Calais, 2016. The word resonates as a symbol of the migrants’ tragedy. In the ‘Jungle’, located near the town and currently being demolished, thousands of Afghans, Syrians, Iraqis, men and women from Africa, Asia and the Middle East have been waiting in appalling conditions for opportunities to cross the Channel. In September there were possibly 10,000 people in the camp, one of the largest shanty towns in Europe. By October 20th about 7,000 remained, including 1,300 minors. Every week or so, migrants have died, trying to board lorries, trains or ferries. Infighting takes place regularly.

The ‘jungle’ does not meet international humanitarian requirements: most refugees live in tents, in mud and squalor. Some 25 miles away from Calais, in Grande-Synthe, near Dunkirk, Médecins sans frontières have erected the only purpose-built migrant camp complying with UN Refugee Agency standards for up to 2,500 refugees. The mayor came up against state authorities, which opposed it and did not give a penny towards the project.

The position of the French government has been a disgrace. Although one of the largest countries in western Europe, it has accepted only a tiny minority of refugees and has repeatedly tried to scatter them far from the Channel where many tend to go. The dismantling of the Calais ‘jungle’ is the latest episode in a story which began nearly 20 years ago, when migrants started gathering in Sangatte, close to the Calais tunnel.

In 2003 the Touquet Franco-British agreement provided that these migrants, who want to go to Britain, should be blocked in France. Dozens of kilometres of fences have been erected; hundreds of police have been gathered; plots of land have been flooded and a new wall is being built. All without diminishing the flow to Calais. The reasons for migrants wanting to cross the Channel are diverse: they have relatives in Britain; they speak no French but some English; and the British informal economy gives them hope that it will be easier to find jobs there than in France, where unemployment is high and regulations are tighter. Calais is not the only evidence of the refugee crisis in France, but it has become its most blatant manifestation. It symbolises the closure of the gate into Britain.

Calais has a long history of connection with Britain, a history that is obscured if we begin with the ‘Jungle’. For, in modern times, Calais has been more of an entry point to the Continent for British workers than a gateway to Britain for Europeans. That was the case in 1816, after more than two decades of war with France. Over the next 50 years, hundreds of British tulle and lace-makers emigrated to Calais and other production areas in northern France. Most came from the East Midlands, which was the leading region in the industry. A series of technical innovations in framework knitting resulted in a  groundbreaking lace machine, patented by John Heathcoat in 1809: the Bobbinet lace machine. It provided the Nottingham lace industry with a decisive asset. After the end of the war, in 1815, the French market – the largest in Europe – was a valuable prospect. There was one major obstacle: high duties on imports to France. Smuggling was extremely common but it came at a cost. By going to live and work in Calais, a few lace-makers circumvented the obstacle. Being in France enabled them to compete more easily with French producers. It gave them access to the French luxury market and laid the groundwork for later, much larger, British labour migrations.

Why Calais? Calais was not far – 250 miles – from Nottinghamshire and these artisans preserved many links. For instance, the thread and the machinery – or at least its internal mechanisms – still came from there. The Nottingham papers regularly provided news about the industry in Calais, including advertisements for jobs in the French lace industry. Calais was also close to Paris, the main market in France. But why Calais and not Boulogne-sur-Mer, which had better transport connections and housed a large British population of around 3,000 in the 1840s? Although there were also migrant workers there, Boulogne’s British population was composed largely of genteel, middle-class residents, some of them in debt, many with servants and some even with remote slave-ownership in British colonies. When British slavery was abolished in 1833, Boulogne housed about half of the 70 British slave-owners who lived in France and who applied for compensation, as the historian Leila Raffiee has revealed. Calais housed just one. While Boulogne relied on pin money, Calais relied on needle – or more exactly bobbin – money.

Whereas the migration to Calais and to other centres initially concerned just a few lace makers, there were hundreds there by the 1840s. Between 1815 and 1860, 270 British lace makers created 230 different businesses in Calais. Most were small entrepreneurs, with just a few workers, many of whom also came from the East Midlands. By the early 1840s, there was an 1,500 lace makers in France, with a majority in Calais.

In Calais, the British tried to replicate their religious and cultural practices. In the 1820s Anglican and Methodist chapels were opened. The Journal de Calais soon published a supplement in English, The Calais Messenger. In 1837 a ‘boxing duel’ was reported by a police superintendent who interrupted it. British cock fighting was said to be responsible for the soaring price of poultry. Later in the century and in better-off social groups, cricket and tennis were reported. The rich Nottinghamshire associational life was also reproduced. In the 1840s, lodges such as ‘Union des Odd Fellows de Nottingham’ existed in Calais as did other friendly societies. The Chartist movement (1838-58), which was powerful in Nottinghamshire, particularly among the textile workers, also had affiliates in Calais. About 10 British residents in Calais sent money to subscribe to the Land Plan, which Chartist leader Feargus O’Connor had set up to promote the creation of Chartist rural communities, where people could live on the land rather than from wage-earning factory work. They hoped to be able to return to Britain, an aspiration shared by many. In some respects, emigrating to France, Belgium or the German states was like UK internal migration – something which could be temporary or seasonal and was compatible with the preservation of regular links with the workers’ native land. It was different from emigrating to the US or the Empire, from where workers did not expect to return.

In Calais, the British lace makers soon hired French workers, who were cheaper than British labourers and, above all, plentiful, to work alongside British artisans. Marriages between British lace-makers and French women testify to a degree of integration. By the 1860s, 20 per cent of the babies baptised by the Methodists were born to Franco-British families; by the end of the century, at a time when immigration had slowed down, most British marriages were mixed.

In the post-Napoleonic period, anti-British sentiment, stoked by the two nations’ years of conflict, could easily resurface. In 1829, in a common rhetoric of the literature on migrants, a local physician complained in his memoir that the British families were made of ‘men, women and children of a good constitution, but profligate, lavish, drunkards and, for most, without righteousness … many are probably the refuse of this so-called generous and enlightened nation’. In 1846-8, a major food, trade and manufacturing crisis affected the whole of western Europe, though to varying degrees. In France, the market for lace collapsed; the industry came to a halt and the situation of more than 1,000 British workers in Calais became critical. In the wake of the revolution that overthrew the July Monarchy, they were the targets of anti-British demonstrations. The inner logic of such rioting was a complex one: for more than 20 years, French, British and ‘Anglo-French’ had worked together in the same neighbourhoods, in the same workshops and occupations. In a period of scarcity, when patriotism was exacerbated by the proclamation of the Republic, the 1848 version of ‘French jobs for French workmen’ appeared to many as a valuable rhetorical strategy. Xenophobic riots took place in Rouen against the British, along the Belgian border against Flemish workers or, in the south-east, against Italians.

In March 1848, the British lace makers who wanted to leave Calais had few prospects of finding work in their native East Midlands, where the crisis was also serious. The British consul in Calais acted as a go-between for the application of 642 distressed lace makers and their relatives for an assisted scheme of emigration to Australia. The Lodge of Oddfellows played a role in structuring the group. Once this was granted, they emigrated aboard three ships to South Australia and New South Wales and dispersed, until their story was recovered in the 1980s by a family history society, the Australian Society of the Lacemakers of Calais. Then as now, migration could turn out to be partly accidental and unplanned.

As for Calais, the British remained, although their numbers declined. Gradually, French firms took the lead in the domestic industry and by the later 19th century the British influx mattered less. There were still some British migrants in Calais, although declining in proportion, and connections were preserved. Lace machines, for example, were imported from Nottingham until the 1950s and, to this day, the shrinking Calais lace industry has kept some of the technology and language bequeathed by the British pioneers– from ‘le Leavers’ – a machine devised by John Levers in 1813 – to ‘la wheeleuse’ – a female worker putting the thread into the bobbins.

Britons on the move

How does the 19th-century migration to Calais fit into the larger picture? The migration of British lace makers was just the start – or the resumption – of the movement of thousands of British engineers, artisans and workers to the European continent. This flow of workers had existed in the 18th century and legislation had been passed at Westminster to prevent the loss of skills by the country; it was repealed only in 1824. After the Revolutionary and Napoleonic wars, industrial Britain had acquired a technological lead in several sectors, which lasted until 1870 at least and, in some sectors, much longer. Meanwhile, British artisans and capitalists emigrated to the Continent. Highly skilled puddlers (who puddled iron) from South Wales were prized by ironmasters across Europe and could bargain for high wages. The expertise of Cornish miners was famous. Dundee’s plentiful workforce – especially young female workers – was hired by linen and jute entrepreneurs. As British machines were the most sophisticated and productive, they were largely exported, especially after a ban on the export of machinery was lifted in 1843; in her novel Mary Barton (1848), Elizabeth Gaskell mentioned ‘the great firms of engineers, who send from out their towns of workshops engines and machinery to the dominions of the Czar and the Sultan’. It was cost-effective to recruit British mechanics to operate them. From the 1840s, railway tycoons such as Mackenzie, Brassey and Brunel built railways in countries beyond Britain. To build the Paris-Rouen-Le Havre line in 1841-7, they ‘imported’ not only an engineer, but also thousands of British navvies, miners, bricklayers and mechanics.

Some workers did emigrate to Britain. But in the 19th century, unlike France or the US, Britain was above all a land of emigration, not of immigration. Some 14.5 million British emigrated from the country between 1815 and 1914. While the UK only accounted for about 10 per cent of the European population, it provided about 36 per cent of its emigrants. Most went to the US, Canada, Australia, New Zealand or South Africa. But some also went to Europe, as this history reminds us.

Fabrice Bensimon lectures in British history at université Paris-Sorbonne and is currently a Marie Sklodowska-Curie fellow in the History Department at University College London. 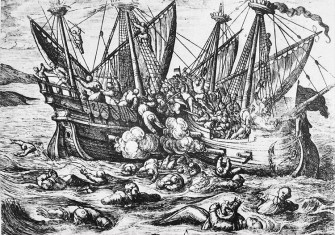