Artists and the Classical Ideal

An engrossing exhibition on the origins and development of drawing from ancient sculptures. 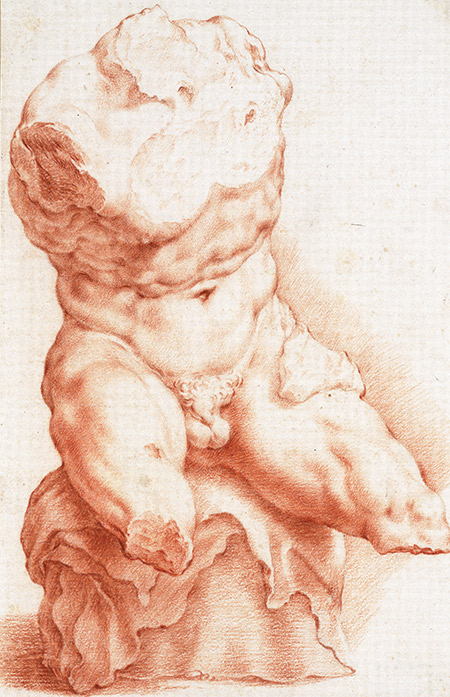 The practice of drawing from classical sculptures or casts was standard in British art schools until the mid-20th century. In other parts of Europe and in the USA drawing ‘from the antique’ continued a little longer but has now all but disappeared. The struggles for artistic self-determination in the 19th century – in Realism, Pre-Raphaelitism, Impressionism, right up to Hydra-headed Modernism – hastened the decline in popularity of a tradition of drawing well-established in Italy since the early 1500s.

Drawn from the Antique: Artists and the Classical Ideal, at Sir John Soane's Museum in London, explores the origins and development of this tradition through a sequence of prints, drawings and paintings. They reveal overlapping concerns with a concept of the ‘Ideal’ and beauty that could be perceived through the viewing of ancient sculpture. Displayed in the Vatican and other more public places, they were admired by collectors and artists alike. A system of artistic training was established and subsequent treatises on taste and discernment followed. In books on proportion the beauty of these sculptures was extolled by mathematicians and philosophers. In the Academies established throughout Europe, where drawing became the foundation of artistic excellence, sufficient skill in translating the forms of sculpture had to be demonstrated before the student could progress to drawing from the nude, from which stemmed the crowning achievement, istoria, the painted representation of religious and historical subjects.

In an etching by Odoardo Filaretti depicting an artist’s studio (c. 1608), we see earnest young students studying a modest selection of sculptural fragments, probably casts. Here, as elsewhere, the sculptures have not been restored, authentically headless, and sometimes – as in the celebrated Belvedere Torso – limbless too. A red chalk drawing (dated 1591), by the Dutch engraver Hendrick Goltzius, delineates both the complex silhouette and the muscular mass of the ‘Torso’ (above). In two other works, the same artist contrasts the qualities found in the Apollo Belvedere and the Farnese Hercules, including the awed attention of the beholders in his representation. Many ancient sculptures became canonical, representative both of the society that begat them and of the aspirational culture of the Renaissance and the artistic periods that followed.  Thus, the Gladiator, the Crouching Venus and the Spinario, among others, became significant names to artists and tourists throughout Europe.  Their presence was epic, their cultural value immeasurable; they became the source of visual quotations, their poses incorporated into subject paintings and portraits where they extended or elevated pictorial narratives.

In many works displayed here, depictions of living figures contemplate the ideal marble bodies. The onlookers’ engagement is always significant. In Joseph Wright of Derby’s An Academy (1772), exhibited in a velvety mezzotint, a variety of responses to the Nymph with a Shell are captured. The wondering stare of the youth on the extreme left is, however, the most completely engaged. His besotted gaze represents a subtle change in European art as a concern with such sculptural figures shifted from the official to the personal, from the anatomical to the amatory. In the final section the less familiar of two drawings by Turner, depicting male figures wrestling, is a particularly striking example of the decline of the ideal. The artist’s imagination has been stimulated by training in drawing from classical sculpture but has altered it to something less Ideal, neither serene nor noble, and far removed from the intentions either of Vasari or Winckelmann, let alone Reynolds.

An engrossing display, full of well-chosen delights. Works from the private collection of Katrin Bellinger are accompanied by loans from the British Museum, the Courtauld, and the Teylers Museum, Haarlem, among others. The catalogue is essential for university teachers, students and general enthusiasts who seek to understand the place of drawing in western culture and the persistence of the Antique.

Drawn from the Antique: Artists and the Classical Ideal is at Sir John Soane's Museum, London until September 26th, 2015.

Colin Cruise is Reader in History of Art at Aberystwyth University. He is author of Pre-Raphaelite Drawing (Thames & Hudson, 2013).