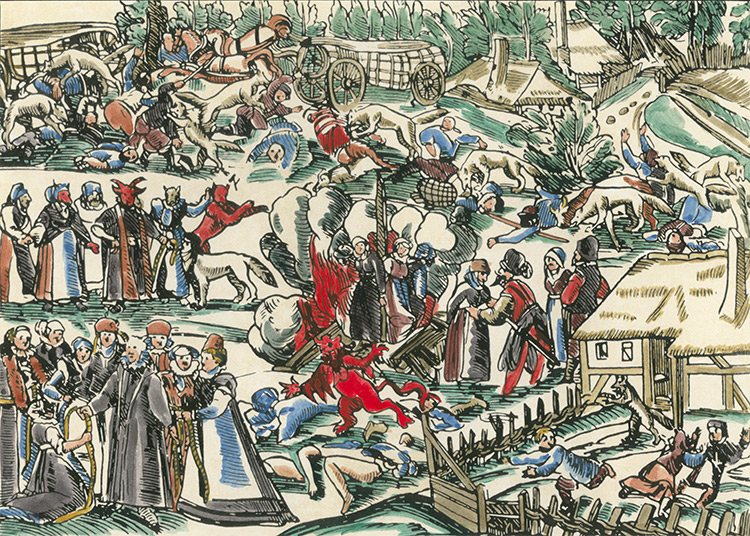 The 'horrifying and never before heard' news of 300 female werewolves (lycanthropes), who terrorised the Duchy of Jülich after making a pact with the devil was published in a sensational broadsheet by Georg Kress in 1591 in Augsburg (now in Germany). These lycanthropic women attacked men, boys and cattle, adopting lupine form and slaughtering their victims until 85 of them were apprehended and burnt at the stake in Ostmilich on May 6th, 1591. A woodcut image depicting women and wolves – many of whom are committing wild acts of violence – accompanied a series of verses outlining the exploits of the She-Wolves of Jülich, which included cannibalism, infanticide and demonic communion. At the centre of the image two female figures are tied to the stake, the flames of an execution pyre licking their ankles.

Perhaps partly a response to the anxieties engendered by both the Inquisition and the Reformation, a growing taste for lurid and bloodthirsty 'news' encouraged publishers to churn out increasingly fantastical tales of diabolical individuals, causing a dramatic rise in such stories at the end of the 16th century. One of the best-known examples, from 1589, is the story of a peasant known as Stubbe Peter (also called Peter Stumpp, among other variations), the so-called 'Werewolf of Bedburg'. Peter's murderous career – which included, according to various accounts, drinking blood, eating brains, murdering children and pregnant women, entering into an incestuous relationship with his own daughter and having sexual intercourse with a succubus – was matched only by the brutality of his trial and execution, during which he was allegedly broken on a wheel, flayed, decapitated and burnt along with his daughter and mistress.

However, outside populist reports little evidence of the man's existence has been found. No record of his birth survives and, more significantly, there are no records of his trial or execution.

If the story of Stubbe Peter is somewhat dubious, the tale of the Jülich she-wolves borders on absurd. The shocking figure of 300 women engaged in diabolical lycanthropy and the additional claim of a mass execution of 85 individuals surpasses even the more exaggerated claims about early modern werewolf trials. No trial records survive and no record or name of any individual woman has been discovered. However, while Kress's account of the she-wolves cannot be corroborated, his broadsheet offers some tantalising suggestions about the perception and creation of early modern werewolves.

Kress's story of the She-Wolves of Jülich appeared a few years after the publication of the Stubbe Peter story and sets itself up as a more gruesome and horrific story of demonic lycanthropy. The cannibal peasant is replaced by a pack of ravenous women; where Peter confessed to 16 murders, the Jülich women confessed to 94. The women particularly targeted tradesmen and butchers – killing livestock and horses as well as men – undermining the city's socio-economic stability as well as its morality.

It is tempting to read Kress's account as an attempt to outdo a fellow publisher, but the Jülich story is not simply an escalation of the Stubbe Peter narrative. Like a modern clickbait tabloid story, Kress's narrative belies its incredible headline. While we are promised a tale of 300 women, what we get in the verses is a confession by one woman. The claim that 85 women were put to death is never explained, as the text only tells us that the arrested woman implicated 24 others.

Moreover, though the story begins as a catalogue of horrendous crimes – including the devouring of male brains and hearts – it develops into a specific anecdote that owes as much to folk tales as it does to trial records. In the middle of a list of the Jülich women's crimes, the report breaks off to describe a group of children playing on farmland. The oldest child finds a belt, puts it on and is immediately transformed into a werewolf. The other children are terrified and call for their neighbours to attack the wolf. But the young lycanthrope begs them not to hurt him; he explains that his mother changes into a wolf every night and runs in the forest with other werewolves. He tells the assembled mob that his mother also has a skin belt, which she puts on to effect her nightly transformation. The child's mother is duly arrested and she confesses to having received both the belt and the knowledge of transformation from the devil.

Thus, despite its claims of mass diabolical communion by a horde of murderous women, the story gradually focuses its attention on just one woman who is not simply an acolyte of the devil but also a terrible mother who has set an appalling example for her young son. From broader concerns about the susceptibility of women to Satanic delusion, the broadsheet finally reveals a concern with maternity and domesticity.

Interestingly, Kress's broadsheet claims an intended audience that is exclusively female – 'pious women and maidens' – to whom it should serve as a warning and example. The suggestion that even pious women need to be warned about demonic delusion underlines a theological assumption of women's susceptibility to the devil's wiles, but it also draws a distinction between the 'good' female reader and the 'bad' female werewolf. It would be another 250 years before the female werewolf entered fiction – in Frederick Marryat's 1839 The Phantom Ship – but when she did, she was immediately figured in similar terms of dichotomous femininity to those hinted at in Kress's broadsheet.

From Henry Beaugrand's 'The Werewolves' to Buffy the Vampire Slayer, the female werewolf in contemporary popular culture frequently serves as a visceral and physical manifestation of a 'bad girl': disruptive, hypersexual and homicidal. While Georg Kress's broadsheet might lack historical veracity or corroborating evidence, it is a fascinating early example of a werewolf image that is now firmly established in the 21st-century imagination: the female werewolf is not just wild, she is a man-eater.

Hannah Priest is the editor of She-Wolf: A Cultural History of Female Werewolves (Manchester University Press, 2015). 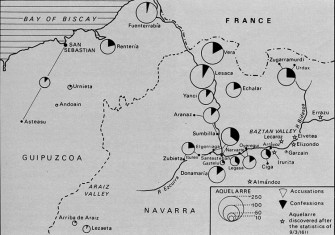 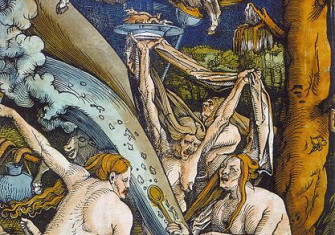