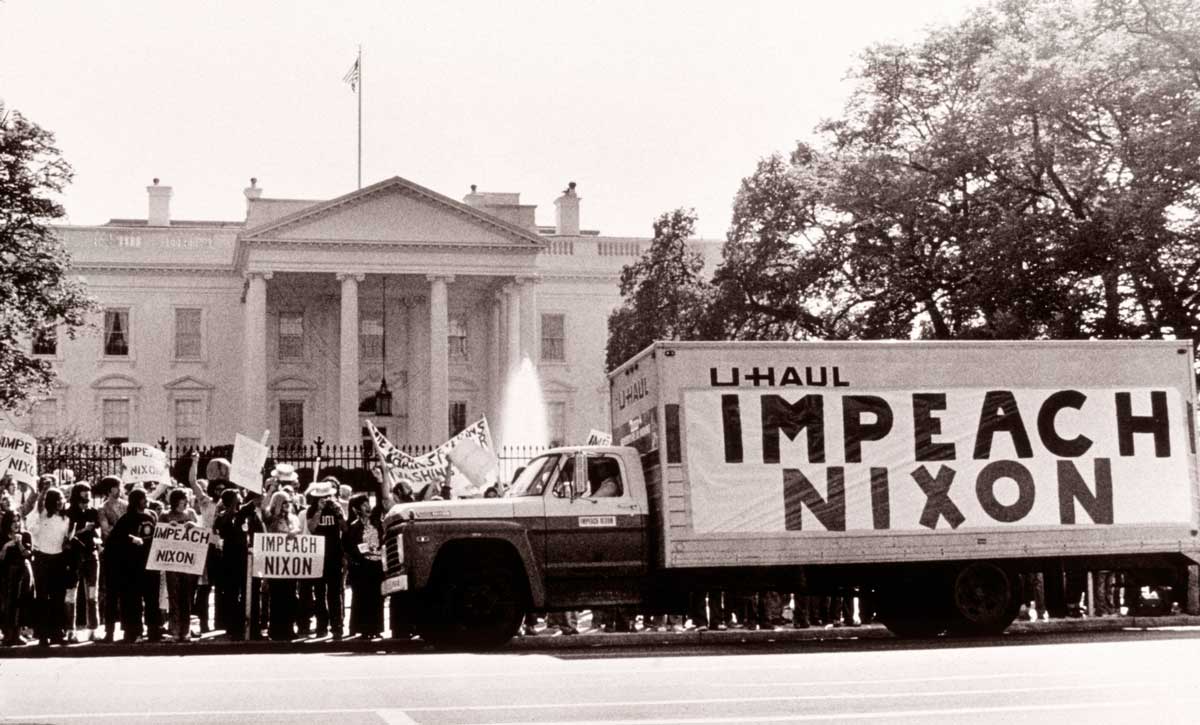 ‘“Watergate” has been synonymous with criminal wrongdoing’

For the past half century, the term ‘Watergate’ has been synonymous with criminal wrongdoing at the highest level of government. Of its multi-faceted legacy, there are perhaps three strands that remain evident to this day. First, the scandal resulted in the evolution of a permanently adversarial media. Two Washington Post investigative journalists became the poster boys for speaking truth to power. As Bob Woodward and Carl Bernstein bravely held a corrupt Executive to account when others failed to act, they brought unparalleled kudos to their profession. Over time, the news media style evolved from the admirable watchdog to confrontational junk yard dog role.

Second, the reputational damage suffered by the government was reflected in a growing public cynicism. This downward trajectory in trust was not born of Watergate (the rot dated back to the late 1960s) but the Nixon administration’s sleaze broke any remaining trust citizens had maintained in the Executive branch. Opinion polls from the era offer a measure of this scepticism, not helped by Gerald Ford’s brave, but controversial, decision to pardon his disgraced predecessor.

And here is where the third and arguably most damning aspect of the Watergate legacy is apparent. In an era dominated by a voracious media and suspicious public, the implementation of misguided, if well-meaning, legislation added fuel to the political flames. Gerald Ford and Jimmy Carter may have been men of integrity, but the damage was done. The 1978 Ethics in Government Act contained some uncontroversial elements (e.g. those relating to disclosure of gifts) but Title VI, establishing the Office of the Special Prosecutor, was a monument to the law of unintended consequence. Its unlimited scope and budget contributed to the unfortunate development of a political culture of scandal which over time has become the norm.

Watergate cannot be blamed for the dysfunctional state of US politics in the 21st century. It did, however, sow the seeds of mistrust that became the tangle of media, public and political cynicism that pervades to this day.

‘Republicans took action to prevent an even graver crisis’

Michael Koncewicz, Research scholar at New York University and author of They Said No to Nixon (University of California Press, 2020)

‘I’m sorry that you insist on putting your personal commitments ahead of the national interest’, Richard Nixon said to Elliot Richardson when the Attorney General informed him of his resignation. Earlier that week, the president had decided to end negotiations with the Watergate Special Prosecutor Archibald Cox over access to his tapes and demanded that Richardson fire him. He refused and, arguing that his resignation was in the public interest, formally quit on 20 October 1973. It was the beginning of what came to be known as the Saturday Night Massacre, a turning point in the Watergate saga, as Republicans inside the Nixon administration took action to prevent an even graver constitutional crisis.

Deputy Attorney General William Ruckelshaus refused to fire Cox, believing that Nixon had crossed a line. The White House fired him immediately before he submitted his resignation. The next in line, Solicitor General Robert Bork, carried out the order. However, the two resignations would prove a massive blow to the Nixon presidency. An enormous backlash enveloped Nixon that autumn, as one poll showed that 75 per cent of the American public opposed the decision to fire Cox. Nixon’s approval rating fell from 38 to 27 per cent and many supported impeachment. Congress responded to the public’s anger, as the impeachment proceedings began later that month. Nixon resigned the following August.

The Saturday Night Massacre was one of several instances when Republicans blocked Nixon’s abuses of power. Others in the Internal Revenue Service stopped hundreds of audits on Nixon’s political enemies while staff in the Office of Management and Budget threatened to resign and talk to the press when asked to cut federal funds to universities. Watergate could have been worse but for their willingness to act against an ‘imperial presidency’. The Republicans who stood up to Nixon during the Watergate era remind us that the 37th president embraced an authoritarian view of the presidency.

The legacy of Watergate is linked to present-day attacks on good governance and to a dangerous sense of loyalty that has taken over much of the GOP since Nixon’s downfall.

‘It inspired other reporters to hunt for the next big story’

Jon Marshall, Associate Professor at Northwestern University’s Medill School and author of Clash: Presidents and the Press in Times of Crisis (Potomac Books, 2022)

In June 1974 All the President’s Men by Washington Post reporters Carl Bernstein and Bob Woodward soared to the top of the bestseller lists. It described the young journalists’ dogged investigation, connecting the Watergate crime spree to President Richard Nixon and his top aides. The Denver Post described it as ‘one of the greatest detective stories ever told’. The film version of All the President’s Men became a box office hit, earning eight Academy Award nominations.

Bernstein and Woodward were not the only ones to play a role in Nixon’s 1974 resignation. Still, what the media historian W. Joseph Campbell calls a myth of Watergate – that the intrepid reporters had single-handedly brought down a president – was born. It inspired other reporters to hunt for the next big story. This aggressiveness uncovered plenty of scandals, some of them minor (‘Peanutgate’, ‘Lancegate’ and ‘Billygate’ during Jimmy Carter’s presidency), some of them major (‘Iran-Contra’ under Ronald Reagan) and some of them sordid and messy (the Monica Lewinsky affair and other misdeeds of the Clinton presidency). The drumbeat of scandal became so persistent that, by the time Donald Trump became president, revelations of corruption and abuse of power had lost their ability to shock.

At the same time, Nixon’s strategy of attacking the press had become the norm. Every president griped about reporters, but Nixon was the first to make demonising journalists central to his political strategy. His chief of staff, H.R. Haldeman, recommended that the press be branded ‘a useful enemy’, dangerous like crime and drugs. Nixon sent Vice President Spiro Agnew around the country to make speeches denouncing the media as a ‘small and unelected elite’, whose views don’t ‘represent the views of America’.

Nearly half a century later, Trump was using Nixon’s approach. He told Lesley Stahl of CBS that he frequently attacked journalists ‘to discredit you all and demean you all, so when you write negative stories about me no one will believe you’. Watergate had destroyed Nixon’s presidency, but his media strategy still flourished.

‘Despite the seriousness of the scandal, America bounced back’

The Watergate scandal and President Nixon’s subsequent resignation reflected an extreme version of historic tensions in American politics: the balance of power between the legislative and executive branches, the importance of the press and investigative reporting as ‘the fourth estate’ and fears over domestic surveillance, among others. Although Americans had contested these issues since the birth of the republic, trends towards concentrated power had gone virtually unchallenged since the Second World War. The postwar era saw the rise of the ‘imperial presidency’, a press corps that rallied around the liberal consensus and the implementation of the CIA’s Operation Chaos and the FBI’s COINTELPRO programmes, aimed at surveilling and disrupting domestic activists.

An important legacy of Watergate is the measures that sought to correct these trends. Congress asserted its authority, placing new controls on presidential power and establishing oversight committees to monitor FBI and CIA programmes.

The immediate aftermath of Watergate showed a decline in American trust in government and a collapse of faith in its institutions, not to mention the irrepressible urge to label subsequent scandals with the -gate suffix. This gave the unfortunate impression that Nixon’s abuses of power and financial wrongdoings were standard corruption, as opposed to a unique Constitutional crisis.

Despite the seriousness of the scandal, America bounced back, in part because the system worked. Nixon resigned in disgrace while several of his operatives went to jail. A seamless transition of power occurred when Gerald Ford assumed the presidency and continued with subsequent elections. By the end of Ronald Reagan’s presidency in the late 1980s, confidence in American institutions had been restored.

Americans proved that they could not only recover from the Watergate scandal, but they had an amazing capacity to forgive. Despite being driven from office, in retirement Nixon somewhat rehabilitated his reputation by re-emerging as a foreign policy expert through his books and diplomatic campaigns. Watergate indicated that public officials can rebound from almost any scandal, provided they have something to contribute to the broader political culture.