Carcassonne falls in the Albigensian Crusade

Richard Cavendish marks the anniversary of a great fortress being sacked, on August 15th, 1209. 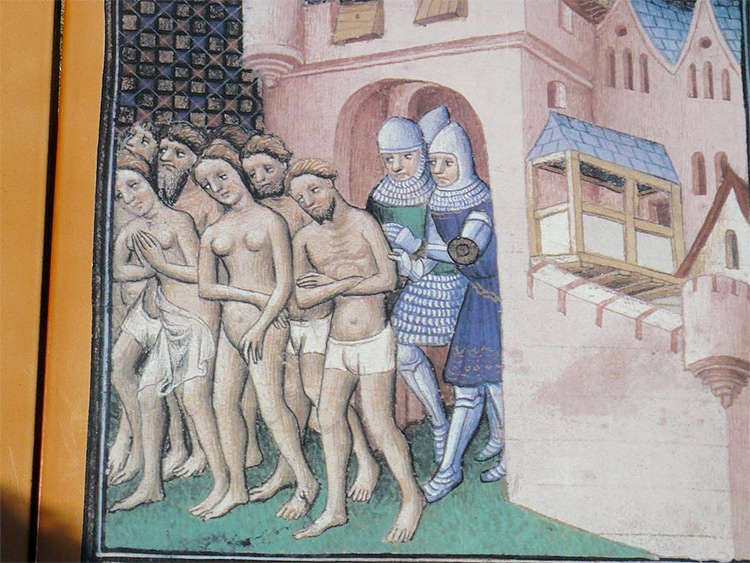 Nest after buzzing nest of heresy was smoked out by the Roman Catholic church in 12th and 13th century Europe. The Waldensians, Cathars and other groups had inherited the dualism of the gnostic sects of Christianity’s earliest days, who believed that the material world was evil, created and controlled by a great malignant power, not by the good God. The Church accused them of worshipping this power of evil, Satan, the enemy of God.

The Cathars of southern France, known as Albigensians after the city of Albia, and a stronghold of heresy, were admired and protected by many of the local lords, most notably Count Raymond VI of Toulouse. Pope Innocent III called on him to wipe the heresy out and, in 1208, sent a legate who was murdered the day after an angry meeting with Count Raymond, by one of the count’s servants. The count did not punish him and was generally believed to have been involved in the killing. The pope now proclaimed a crusade against the Albigensians and called on the warriors of France to avenge the legate’s death: ‘Forward, soldiers of Christ! Forward, volunteers of the army of God! Go forth with the Church’s cry of anguish ringing in your ears!’

Arnald-Amaury, Abbot of Citeaux, was put in charge of recruitment and an army of barons and knights from northern France, who saw prospects of rich pickings for themselves in the lands of the conquered southern French lords, responded to the call. By June 1209, the main crusading force had assembled at Lyon. Jonathan Sumption, a historian of the crusade, estimates it at about 10,000 fighting men with another 10,000 or so camp followers and non-combatants.

The crusaders, joined by the outwardly repentant Count Raymond, headed south for the area around Albi and the lands of Raymond-Roger Trencavel, Viscount of Béziers and Count Raymond’s nephew. He tried to negotiate terms with them but Arnald-Amaury sent him packing. In an unusually hot July, the crusaders reached the city of Béziers and demanded its surrender. The demand was refused and, on July 22nd, the citizens attempted a sortie against the besiegers. They were driven off by some of the camp followers with clubs and tent poles. The city’s defenders panicked and the crusading warriors were able to press in through the gates. The city’s inhabitants were slaughtered without distinction of age, sex or religious identity. A monk reported Arnald-Amaury saying, when asked how the Catholic citizens could be distinguished from the Cathars: ‘Kill them all, God will recognise His own.’ After being thoroughly looted, the city was set on fire and burned to the ground.

The victorious crusaders marched on westwards to Carcassonne, which their main body reached on August 1st. It was much more strongly fortified than Béziers and more bravely defended, with Raymond-Roger Trencavel himself in command, but its weakness was that it was some way from the River Aude and dependent for water on deep wells within the walls. It was also full of panicking refugees from the surrounding area, who were well aware of what had happened at Béziers.

The crusaders soon cut off the defenders’ access to the river, despite a fierce sortie led against them by Raymond-Roger. They tried to scale the walls on August 4th, but were driven back with heavy casualties. They offered extremely harsh terms for surrender, in return for which Raymond-Roger and 11 companions would be allowed to leave unharmed with as many of their possessions as they could carry. The offer was rejected and the siege continued.

Morale in the city was ebbing away steadily as the wells dried up in the continuing heat, but the crusaders did not want to destroy Carcassonne as they had Béziers. If they did, what would be left for whichever of them took over the city? They offered fresh terms. If the city surrendered, the lives of its inhabitants would be spared provided they walked out wearing nothing but their shirts and breeches, leaving everything else for the crusaders. On August 14th, Raymond-Roger and nine of his subordinates were given safe conduct to discuss the terms with the besiegers and accepted them, but then, in breach of the safe conduct, Raymond-Roger was seized and chained up (he died in mysterious circumstances in his own prison a few weeks later, aged 24). The next day Carcassonne surrendered and the citizens left as agreed, ‘carrying nothing but their sins’, in the words of the crusade’s accompanying Cistercian chronicler.

Many other towns surrendered without a fight, but some resisted the crusaders and the struggle continued for years. Pope Innocent died in 1216 and Count Raymond in 1218. King Louis VIII of France led another crusade in 1226 and the Inquisition established itself in Toulouse in 1229. Yet it was not until 1244 that the great Cathar stronghold of Montségur in the Pyrenees was finally captured and destroyed and the Albigensian heresy of southern France was at last wiped out.