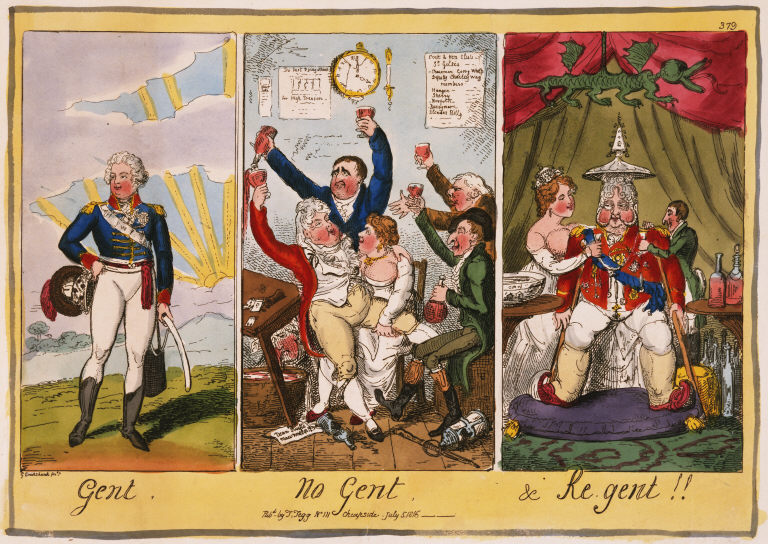 George Augustus Frederick, Prince of Wales, was 48 when he was appointed Prince Regent to his father, King George III. The Regency would be a convenient label for a brilliant period in architecture and the arts, but the prince himself was not highly regarded. A heavy drinker and a compulsive gambler, he poured out quantities of money like a human Niagara Falls. He had charming manners, he sang and played the cello nicely and he was a superbly gifted patron of the arts. But he was considered deeply untrustworthy and his hatred of his father led him to ally himself with the Whig opposition in Parliament. He involved himself in a secret marriage with Maria Fitzherbert in 1785, which he knew was illegal and which he kept lying about. In 1795 he married Princess Caroline of Brunswick, though he loathed her on sight.

The question of the regency had arisen before because of George III’s recurrent fits of insanity, which are now thought to have been caused partly by porphyria and partly by psychological factors. The king became desperately agitated, flew into violent rages, foamed at the mouth and babbled incessantly (once for 19 hours, apparently) until he was exhausted. The attacks had occurred on and off since 1788, when the government had reluctantly brought in a Regency Bill. The king recovered before it could be passed, as he did from subsequent outbreaks, and his implacable opposition made it impossible to get his assent to any such bill when he was in command of himself.

In November 1810 the illness took possession of the king again, probably triggered by the death at the age of 27 of his youngest and favourite daughter Princess Amelia. She was a long time dying and she had a mourning ring containing a lock of her hair made for her father, which was thought to have sent him finally over the edge. He had to be put in a straitjacket and his medicine was administered by force. The royal doctors were optimistic, but it seemed clear to everyone in politics, including the Whig Prime Minister Spencer Perceval and his Cabinet, that a regency was inevitable. The prince behaved with what the Whig society hostess Lady Holland described as ‘very unusual discretion’. He kept well clear of the Whigs and told Cabinet ministers that they were the best judges of what to do, while making it plain that he had no quarrel with them and that if he was regent his treatment of them would depend entirely on their treatment of him.

In December a Regency Bill was introduced into Parliament. The Whigs wanted the Prince of Wales to be declared regent by hereditary right, but the bill passed on February 5th, 1811 was modelled on the one prepared in the crisis of 1788. The impossibility of procuring the king’s assent was got round by requiring the lord chancellor to affix the Great Seal of the Realm to letters patent naming lords commissioners who would grant the royal assent. This was an obvious dodge and the distinguished lawyer Sir Samuel Romilly described it as ‘a fraudulent trick’, but it was difficult to see a practical alternative and both houses of Parliament approved it.

Care was taken to allow for a royal recovery in what was lengthily entitled ‘An Act to provide for the Administration of the Royal Authority, and for the Care of His Majesty’s Royal Person, during the Continuance of His Majesty’s Illness; and for the Resumption of the Exercise of the Royal Authority by His Majesty.’ The regent was required to swear on oath to be ‘faithful and bear true allegiance’ to the king, to maintain ‘the safety, honour and dignity’ of the king and ‘the welfare of his people’ and to uphold the Protestant religion. He was duly sworn in on February 6th at Carlton House, his London residence, attired in the gorgeous uniform of the 10th Hussars. The band of the Grenadier Guards played ‘God Save the King’.

Queen Charlotte was put in charge of caring for the king. There was to be no council of regency, but against the wishes of the Whigs the regent’s powers to award peerages, offices and pensions were limited for the first year. As it turned out, George III never recovered, while to the Whigs’ resentment the Prince Regent ignored his ties with them once he was installed. The king was kept in confinement at Windsor, blind and deaf, unable to recognise his own family and holding conversations with imaginary people or people who were dead – Handel and Lord North among them. When Queen Charlotte died in 1818 he did not understand what had happened and he himself followed her to the grave in 1820 at the age of 81, at which point the Prince Regent became King George IV.