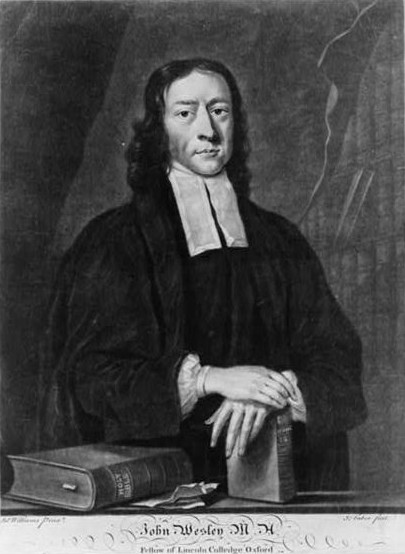 The founder of Methodism was brought up as a staunch Anglican, but cherished the dissenting traditions on both sides of his family. His grandfather, John Wesley or Westley, was a Puritan supporter of Parliament who was expelled from his Dorset living after the restoration of Charles II. This John’s son, Samuel, was educated as a nonconformist, but when he went up to Oxford, he explored his talent for writing and his misgivings about Dissenters. Surprisingly, he considered them unduly frivolous. He became a Church of England curate in London, where he met and married Susanna Annesley, one of the twenty-five children of a prominent Puritan divine, known as ‘the St Paul of Nonconformity’. Spirited and intellectual, she too had moved away from Dissent.

In 1695 Samuel became rector of Epworth, a remote little town in the Isle of Axholme in the flat country of northern Lincolnshire, windswept under a massive sky and so isolated among rivers and marshes that quite often it could be reached only by boat. It was a centre of Dissent and the inhabitants, who have been described by one biographer as ‘morose and in-bred’, were not all enthusiastic about their rector’s Tory politics, High Churchmanship and insistence that moral backslidings on their part required public confession and public acts of atonement.

In twenty years, between 1690 and 1709, Samuel and Susanna Wesley had nineteen (some say eighteen) children, ten of whom survived infancy. With so many mouths to feed, they were constantly worried about money, with which Samuel was hopeless. They also fell out because Samuel accepted William of Orange as the rightful king, but Susanna had Jacobite sympathies. Every evening at household prayers he would pray for ‘our sovereign lord, King William’ until there came an evening when Susanna refused to say ‘amen’. At this he summoned her to his study, where he knelt and called down divine vengeance upon himself and all his posterity if he ever touched her or went to bed with her again. After the rectory caught fire and burned down in July 1702, he changed his mind. Samuel and Susanna were reconciled and their son John was born the following June.

The little boy was called Jackie or Jack in the family. He had an elder brother, another Samuel, who went to Westminster School in London, and five elder sisters. His younger brother Charles and two more sisters were born later. The children were all taught at home, six hours of lessons a day, by their mother, who did not believe in sparing the rod. Years afterwards she wrote that indulging a child makes religion impracticable and salvation unattainable, and so damns the child body and soul for ever. The children said the Lord’s Prayer every night and morning, and Jackie already had Bible stories off by heart when his mother taught him to read. On the day after his fifth birthday she taught him his letters and started him reading the opening verses of Genesis.

In 1705 Samuel was imprisoned for debt for some months in Lincoln Castle. In 1709, when Jackie was five, the recently rebuilt rectory burned down again. When the alarm was raised, Samuel got his pregnant wife and their eldest daughter out and then rushed upstairs to the nursery, where he and the nursemaid seized baby Charles and hurried the other children downstairs and outside. In the confusion no one noticed that Jackie was still obliviously asleep in bed. When Samuel realised what had happened, he tried to go back up, but the blazing stairs would not bear his weight. In agony of mind he knelt down and commended Jackie’s soul to God. Jackie had now woken up and climbed on a chest of drawers to open the latch on the window. Neighbours outside formed a human ladder and plucked him from the casement just as the blazing roof of the house fell in. The tag ‘a brand plucked from the burning’ clung to him ever afterwards and may well have been a powerful force in motivating him. His mother certainly came to think that he had been specially spared by God for some important work.

Jackie was ten when he made the long journey down to London to go to school as a charity pupil at the Charterhouse. It must have been a shock. The boys slept two to a bed in dormitories that were bitterly cold in winter, and learned Latin and Greek in the big classroom which had once been a real tennis court. They played games on a field called the Green, which Jack dutifully ran round three times every day before breakfast. The older boys used to grab the best of the food. Jackie was brave enough to go on saying his daily morning and evening prayers and one story has him regularly gathering his schoolmates round him to tell them ‘instructive tales’. At seventeen he went up to Christ Church, Oxford, on a closed scholarship from the Charterhouse. At twenty-two he became a fellow of Lincoln College, Oxford, and curate to his father at Epworth, and entered the adult world on which he was to make so profound an impact.