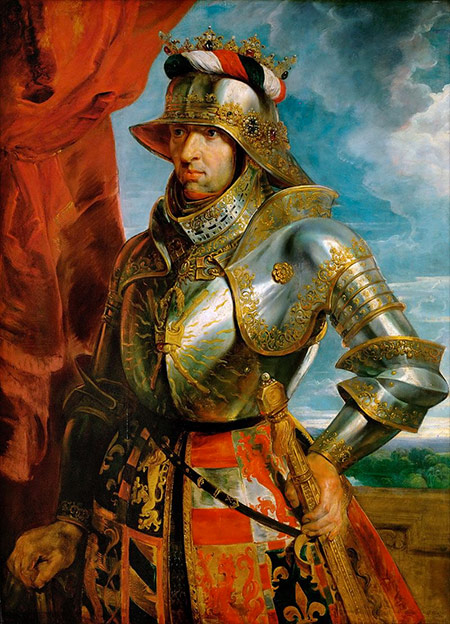 The Treaty of Basel was a turning point in the centuries of conflict between the Swiss communities in the valleys of the Alps and the Habsburgs, the dominant family in the region. The Swiss Confederation was founded in 1291, when three of the mountain communities which controlled the principal Alpine passes allied themselves in a Perpetual League of mutual defence. Other cantons, and towns including Luzern, Zürich and Bern, adhered to the League as the struggle wore on. It was accompanied by in-fighting and vying for advantage between the cantons themselves, while the Habsburgs became rulers of Austria and Holy Roman Emperors.

In 1477 the Archduke Maximilian, heir to the Emperor Frederick III, colossally ambitious and still in his teens, married the daughter of Duke Charles the Bold of Burgundy in a brilliant stroke which gave him Burgundy and the Netherlands when the Duke died a year afterwards. He succeeded his father on the imperial throne as Maximilian I in 1493. In a second marital masterstroke in 1496 he shrewdly married his son the Archduke Philip to the Spanish infanta Juana the Mad, thereby assuring the future Habsburg control of Spain and the Spanish empire in the New World. Maximilian next set out to re-establish his family's ancestral domination of Switzerland, in alliance with the Swabian League of minor principalities in southern Germany under the slogan 'The Swiss, too, must have a master.'

The Swabian War was waged along the Rhine for nine months in 1499. There were fierce engagements and villages were burned, but against the odds the Swiss prevailed and Maximilian was forced to sign a peace treaty at Basel in which the Empire formally acknowledged the existence of the League and, tacitly, conceded Swiss independence. Basel, a wealthy city and one of the nurseries of European capitalism, joined the Swiss confederation in 1501 and the independence of the Swiss states was soon to be taken for granted. It was in the course of this long conflict that the Swiss earned themselves a reputation as the finest fighters in Europe