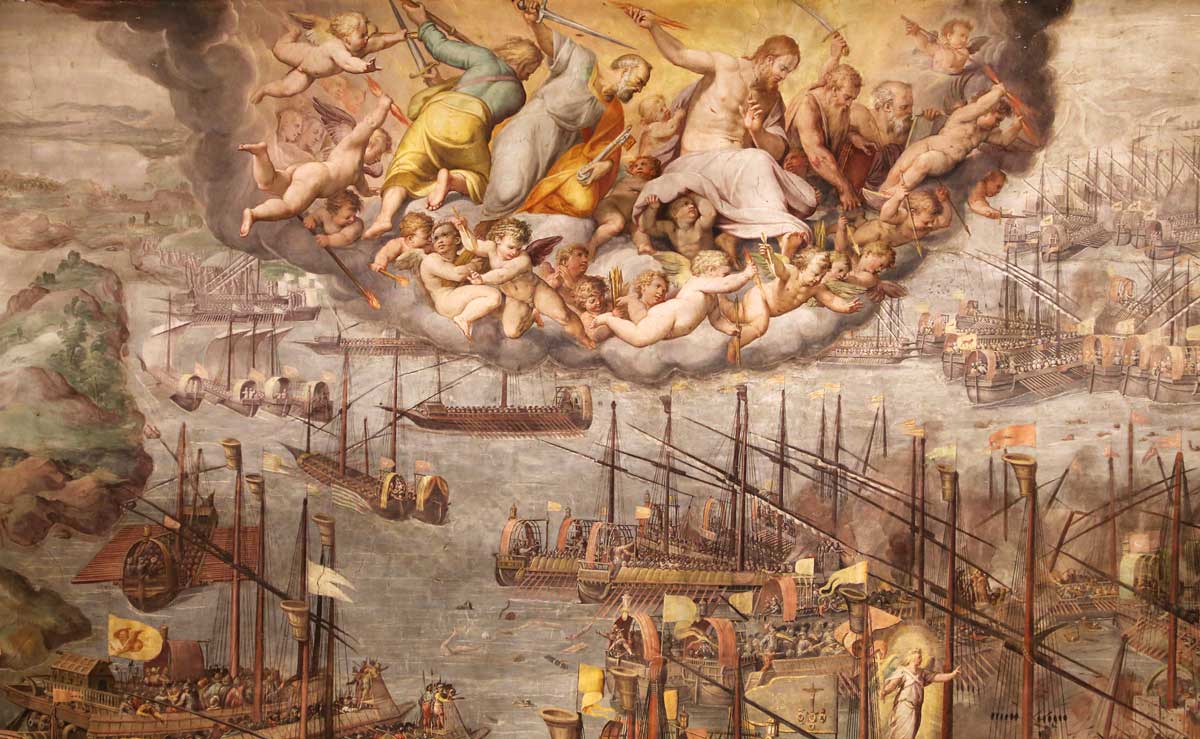 The message arrived at Philip II’s pharaonic complex at El Escorial, still under construction, at 2pm on 31 October 1571, having travelled 3,500 kilometres at an average of 150 kilometres a day: a record. The king was at prayer, since it was All Souls Day, and, on his orders, the choir immediately sang the Te Deum. Philip’s chief minister hailed it as ‘the greatest naval victory since Pharaoh’s army drowned in the Red Sea’.

Two months later Philip’s son and heir was born and the coincidence led him to pardon all prisoners in his jails and to commission from Titian, the most famous painter of his day, a huge painting entitled The Offering of Philip II, which commemorated the two events.

There was much to commemorate. On 7 October, the Christian galley fleet had attacked its Ottoman opponents sheltering in the Gulf of Lepanto and, although it lost 7,500 dead and 20,000 wounded (among them Miguel de Cervantes, author of Don Quixote), it captured 130 enemy vessels and 400 pieces of artillery and liberated some 15,000 Christian galley slaves. The Ottoman fleet lost a further 110 ships sunk, either during the battle or in a futile bid to escape. The local population slaughtered many more Ottoman soldiers when they fled ashore from their doomed ships.

Some contemporaries, followed by many historians, argued that the battle changed nothing. The Ottomans retained Cyprus, recently captured from the Venetian Republic, and their shipyards replaced most of the lost galleys in time for the next campaigning season. As the Ottoman grand vizier told a Venetian diplomat: ‘You have shaved our beard, but it will grow again; we have cut off your arm, and you will never find another.’ But this is to miss the point. By 7 October 1571 Cyprus was already lost; and had the battle that day not been fought and won, the vast Turkish fleet would have left its anchorages in the Gulf of Lepanto early in 1572 and perhaps conquered the Venetian outposts nearby in the Adriatic or even taken Crete. That was well worth a Te Deum.

‘Did the battle put an end to Ottoman ambitions in the Mediterranean?’

Kate Fleet, Director of the Skilliter Centre for Ottoman Studies and Fellow of Newnham College, Cambridge

The Battle of Lepanto was, and is, often portrayed as the triumph of the Christian West over a highly dangerous Muslim enemy. For the Ottomans it was a humiliating defeat. But, in reality, the battle was not significant either in terms of undermining Ottoman naval strength or adjusting the balance of power in the Mediterranean.

The battle took place very late in the campaign season, catching the Ottomans off guard. Their ships were undermanned and in poor condition after an unusually long season at sea. Disputes among the Ottoman leadership developed and the tactics adopted by the grand admiral were heavily criticised. The battle left the Ottomans with heavy losses of ships and manpower. This did not, however, represent a crippling blow to Ottoman naval power, for the empire had both the resources and the wealth to rebuild a fleet by the following spring. As the grand vizier put it, if the sultan wanted anchors for the entire navy to be made from silver, ropes from silk and sails from satin, then that would be done.

While not a devastating disaster for Ottoman sea power, did the battle of Lepanto put an end to Ottoman ambitions in the Mediterranean? It certainly did not put a stop to the Ottoman conquest of Cyprus in 1571. The Venetians might thus have singed the Ottoman beard at Lepanto, as the grand vezir apparently commented, but the Ottomans had cut off the Venetians’ arm. While a beard would grow back bushier than before, an arm would not. The loss of Cyprus, when Venice finally, reluctantly accepted it in 1573, was a blow of an altogether different magnitude from that of the defeat of the Ottoman navy at Lepanto.

In 1574 the Ottomans reconquered Tunis. From now on Ottoman policy moved to one of defence in the Mediterranean, rather than aggression. It was not, however, Lepanto that prompted this shift in policy, but Ottoman preoccupation elsewhere, with its wars with Hungary and Iran and the increasing economic difficulties faced by the state. What had already curtailed Ottoman ambitions in the western Mediterranean was not Lepanto but the Ottoman failure to take Malta in 1565. Had they done so, the Mediterranean might have looked very different.

Kiril Petkov, Professor of History at the University of Wisconsin-River Falls

At Lepanto a naval coalition of central and western Mediterranean Christian forces defeated the largest fleet the Ottoman Empire had ever assembled. The Ottoman capital lay open to a Christian attack, European provinces were restive and the fate of the empire hung in the balance. However, the Christian triumph was not followed through. The Ottomans rebuilt their navy, continued a campaign of successful land-based warfare and solidified their grip on the insular Eastern Mediterranean.

Still, there are reasons to consider Lepanto a pivotal moment in history, and the understanding of its impact paved the way for modernity, in several aspects.

First, in purely naval-military terms, the battle demonstrated, for the penultimate time, the decisive impact of novel technology against even the most sophisticated, seasoned and formidable opponent. Second, it highlighted the importance of psychological turning points in the practical expression of cultural-political conflicts. The Ottoman-Christian confrontation may not have been a ‘clash of civilisations’, but it was widely perceived as such in Europe. Up to 1571, the Ottomans were thought of as irresistible, but Lepanto proved that the ‘Turk’ could be beaten and that divine favour was still with the Christians. Theorists and politicians could now plan their internal and external encounters unencumbered by the overt or subconscious imperative of factoring in the impact of an overwhelming and alien force.

Third, Lepanto showed the Christian universe, mired in internal political squabbles, that diversity was not detrimental to its potential world leadership. And, fourth, paradoxically, Lepanto demonstrated that even professedly alien powers immersed in the bitterest of conflicts were actually quite similar to their opponents. A pervasive ontology of sameness, rooted in notions of essential humanity and nascent sensitivity to cultural relativism soon developed. The Ottoman enemy and its Christian opponents became, over time, integrated parts of a discernible, albeit internally contentious unity, revealed by that great equaliser, war.

‘Lepanto did have consequences and they were significant’

Roger Crowley, Author of Empires of the Sea: The Siege of Malta, the Battle of Lepanto, and the Contest for the Centre of the World (Faber, 2008)

As sea battles go, Lepanto was devastating. More than 40,000 men died in four hours and the Ottoman fleet was almost annihilated. To survivors it resembled a scene from the end of the world. It seemed at the time to be as pivotal for control of the world as the Battle of Actium in 31 BC. Yet, despite the psychological boost to Christian Europe, the follow-up came to almost nothing. The Ottomans appeared to have shrugged off defeat with a euphemism: ‘The Battle of the Dispersed Fleet’. Over the winter of 1571-72 they built a replacement fleet of exactly the same size and sailed out again the following spring with 134 galleys. Historians have dubbed Lepanto ‘the victory that led nowhere’.

Yet Lepanto did have consequences and they were significant. Galley fleets were ruinously expensive to build and maintain; the loss of skilled men could not quickly be made good. The sheer cost of putting to sea drained treasuries and a close look at the new fleet, in the eyes of one eyewitness, revealed ‘ships of green timber, rowed by crews which had never held an oar, provided with artillery cast in haste, with apprentice guides and mariners’. The fact that there were few strategic consequences from Lepanto for either side revealed a truth: that the finances and ergonomics of large-scale galley warfare were unsustainable. With human-powered ships the sea was unwinnable. Lepanto led to a disengagement from imperial Mediterranean ambitions and created a permanent stalemate between two maritime empires. It also triggered a peace: in 1580 Philip II of Spain and the Ottoman sultan Murad III tacitly signed a treaty, while both claiming victory.

Lepanto fixed the limits of two worlds. From this moment on, a diagonal frontier that ran the length of the sea from Istanbul to the gates of Gibraltar hardened and the competitors turned their backs on each other. The Mediterranean was now destined to become a backwater. The economic damage of galley warfare had been considerable. Philip defaulted on his debts in 1575; the tax gradient in the Ottoman Empire rose. Lepanto revealed the first cracks in its system and signalled the start of a long, slow decline.