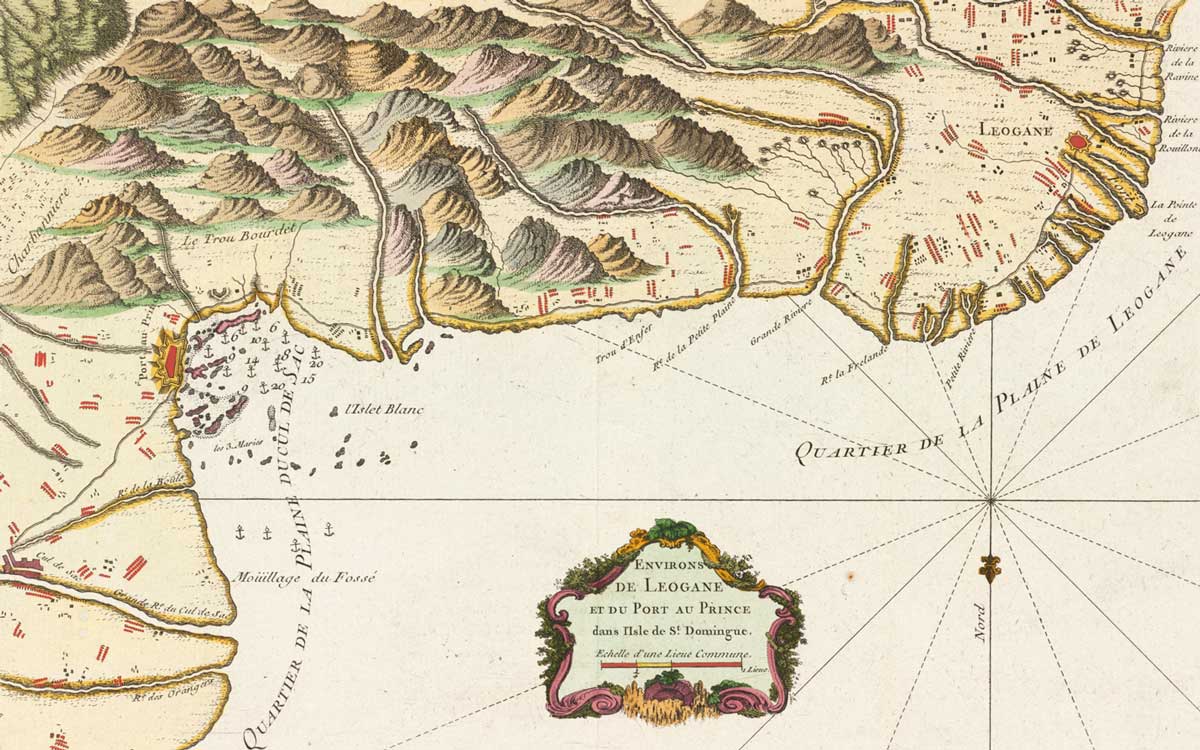 ‘The Caribbean became a focal point of rivalries among Europeans, a location where imperial contests were fought’

The Caribbean ushered in the modern world. Most infamously, it was the site of full-blown racial slavery – a horrific institution founded on the commodification of people as objects of exploitation – which was perpetrated on a massive scale. The Caribbean population intermixed not just European, African and indigenous American, but also housed a great diversity from within Europe itself. All the groups that crossed the Atlantic from Europe came to the West Indies, setting up rival colonial outposts, but also living together in specific colonies and achieving levels of diversity only seen in the most polyglot of European cities.

The Caribbean became a focal point of rivalries among Europeans, a location where imperial contests were fought. The value placed on the region fostered these struggles for power. The Caribbean’s high value arose from two facts that also signalled its centrality to modernity. It was a gateway for the silver extracted from the Americas, which funded the Habsburgs’ worldwide empire and fuelled an emerging global economy toward modernity. And (along with Brazil) it was the locus for the creation of plantation economies based on racial slavery. These plantation economies were central to the creation of the factory model of economic exploitation which made the plantation colonies the most valuable holdings of European colonisers in the 18th century, including both French Saint-Domingue and British Jamaica. Sugar and silver had devastating environmental effects as well, another precursor of modern economies of exploitation.

All these elements – racial slavery, diversity, imperial violence to achieve superiority, oppressive economic exploitation on a vast scale and the resulting astounding profits – heralded the advent of the modern, interconnected, global reality of inequality, mass consumption and disregard for the environment. Only by understanding the pivotal place of the Caribbean in this experience can we come to terms with the legacies that we still grapple with today.

‘The Caribbean was the birthplace of modern anti-colonialism’

Marlene Daut, Professor of African Diaspora Studies at the University of Virginia

The Caribbean was the birthplace of modern anti-colonialism. Inhabited by humans since 5,000 BC, the island of Ayiti, renamed La Española by the Spanish in the 15th century, was the initial site of conflict between Spanish colonisers and the existing occupants of the region. The 19th-century Haitian writer and politician Baron de Vastey located the blueprint for later Haitian independence in the resistance of ‘the first Haitians’.

After Columbus’ appearance on Ayiti in 1492, among the worst of the atrocities his men committed in the name of acquiring the gold residing in the island was the execution of Anacaona, Queen of Xaragua (one of Ayiti’s five main principalities). In 1504, along with 300 Xaraguans, Anacaona was coerced into attending a feast given by the Spanish governor, Nicolás de Ovando. She was arrested, accused of treason and then hanged. Her execution was followed by a war, during which the Spaniards massacred almost the entire population of Xaraguans. Anacaona’s husband, Caonabo, had died eight years earlier on the ship on which he was being deported to Spain.

Orphaned by the war, Anacaona and Caonabo’s great nephew, Enrique, was forced into servitude at a convent where he learned to admire the Spanish doctor, Bartolomé de las Casas. But in 1519, mistreated in his benefactor’s absence, Enrique rebelled. After acquiring arms, he convinced hundreds of other Ayitians, as well as enslaved Africans, to join him in a 14-year revolt against the Spanish in the mountains of Bahoruco (now Dominican Republic). In 1533, a new Spanish governor was compelled to acknowledge Enrique’s autonomy in what became the first maroon treaty.

The Haitian revolutionaries took up the mantle of anti-colonialism when in their 1804 declaration of independence they discarded the name of Saint-Domingue, given to the west of the island by the French in 1697, and declared that Haiti, named in honour of the history shared by Ayitians and Africans, would be permanently slavery free. Their actions provided inspiration for many 20th-century anti-colonialists, such as Aimé Césaire, who declared: ‘Haiti is where négritude stood up for the first time and proclaimed that it believed in its own humanity.’

‘The Caribbean matters because of slavery and its legacies’

Stephen Wilkinson, Lecturer in Politics and International Relations at the University of Buckingham

If you were to ask historians for a date on which to argue modernity began, then 12 October 1492 would be a good candidate. For on that day, when the Arawaks ‘discovered’ Columbus on their beach, so began the story of the ‘West’, of the frontier and of the Atlantic. Columbus’ journey was more significant than his arrival. For not only did it dispel the idea of the world being flat, he and his crew also proved the possibility of sailing across an ocean beyond sight of land. The age of exploration began before Columbus sailed, but with this voyage, he opened the European age of navigation and the age of the transoceanic maritime empire.

Columbus also started something else. On his second voyage, he sailed with both African slaves and sugar cane plants on board. The voyage was thus the prototype of hundreds of thousands that followed, which became the source of a capital accumulation that would dominate the transatlantic world for the next 350 years. The Caribbean matters because of slavery and its legacies. The plantation system, the mercantilist moment, colonialism, the industrial revolution, consumerism and all that we associate with the modern world, including notions of citizenship, individual liberty, anti-colonialism and nation building, are all traceable back to the Caribbean. As the recent controversy over the statues of slavers has shown, to contemplate the Caribbean in history is to address questions of who we are, what we believe and how we got here.

Take Haiti. In 1804, Haitians carried out the first successful slave revolt in history and became the first and, thus far, only country to self identify as ‘Black’; with the first constitution in the world that recognised the rights of all its citizens regardless of the colour of their skin. As the likes of C.L.R. James and Lillian Guerra have pointed out, Haiti changed history by overturning what almost everyone in the Atlantic world took for granted. In the oddest of quirks, 60 years before the Declaration of Emancipation in the United States, it was on the very same island in the Caribbean where Columbus started it all that the struggle for freedom from colonialism and racism had its first victory.

‘At the turn of the 20th century, the Caribbean came under the sway of the United States’

The Caribbean, an archipelago of firsts, has a consequential history. It was the first site of European colonialism, with its cavalcade of violent conquest, disease, dispossession, extraction and genocide. Later, it served as the birthplace of modern racial slavery. Of the more than ten million African captives taken to the New World, almost half landed in the Caribbean, mostly to work in sugar. The system created vast wealth for those who claimed them as property and for the nations that ruled the islands.

At the turn of the 20th century, the Caribbean came under the sway of a newer imperial power, the United States. Military interventions became routine; occupations sometimes lasted for decades. They protected massive investments, in agriculture, mining and more. By mid century, interventions and other more subtle forms of pressure also protected US superpower status. The most dramatic face-off, over Soviet nuclear missiles in Cuba, occurred in the Caribbean. Though a Cold War episode, it originated and unfolded in the manner it did due to older conflicts over imperial rule and self-determination that went back to the days of slavery.

The Caribbean was also home to the earliest challenges to slavery and colonialism. The Haitian Revolution was the second anti-colonial revolution in the world. But it was the first one founded on anti-slavery and anti-racism, as its Black leaders announced to the world that human rights were their rights, too. It also produced the world’s first modern slave emancipation, initially forced on colonial authorities by the actions of the enslaved. Later revolutions in Cuba – the 19th-century one against Spain and that of 1959 – shared some, if not all, of its principles.

The Caribbean is key because it contains antecedents of the structures of exploitation that continue to shape our world, as recent projects tracing the profits of slavery into the present make clear. It is key, also, because it launched some of the most consequential attempts to undo those structures and their legacies. Finally, it demonstrates that those attempts can themselves produce new forms of domination. The intertwined histories of colonialism and slavery and of the struggles against them have never-ending, always evolving, afterlives.