What has been the Impact of the Creation of Bangladesh?

Beginning in March 1971, the Bangladesh War of Independence led to East Pakistan becoming a new nation state. On the 50th anniversary of its outbreak, four experts assess the war’s legacy. 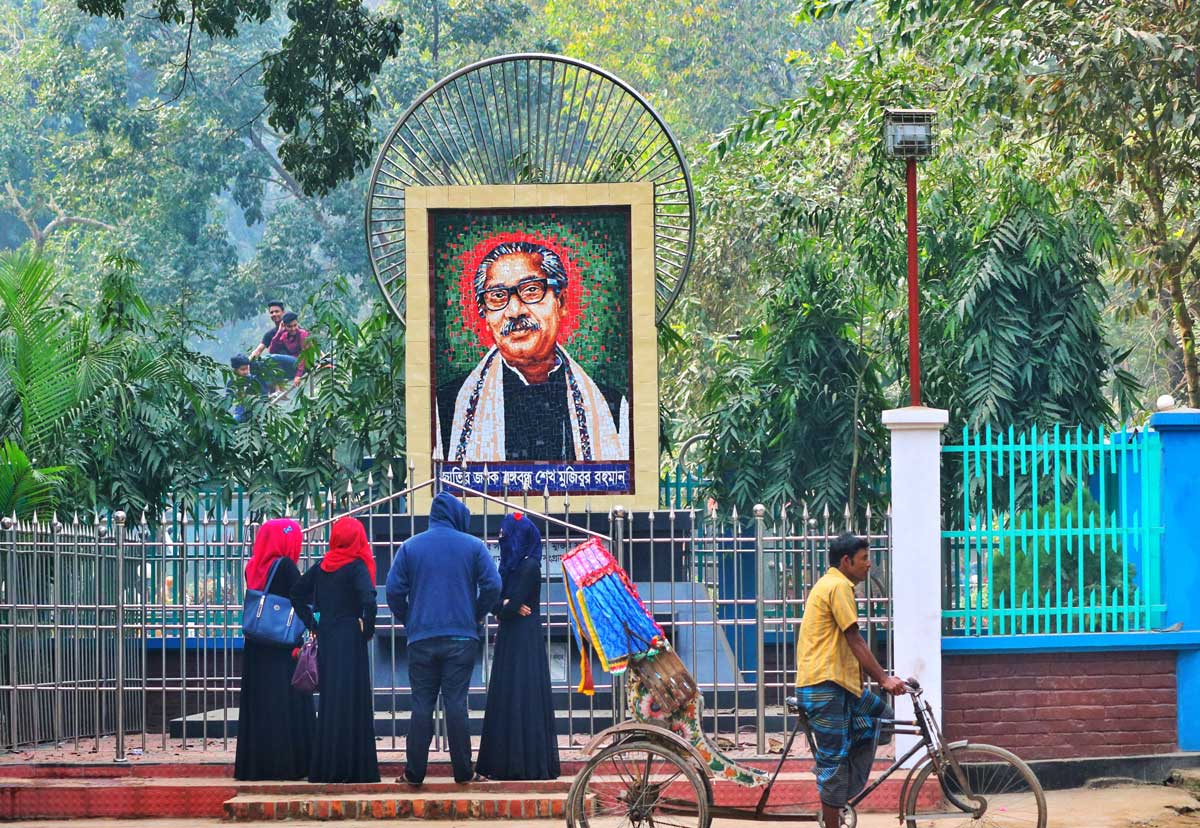 ‘The “nation state” is the poisonous gift of European colonisation’

The creation of Bangladesh was a missed opportunity for India to reverse the British partition of Bengal. It was an error of judgement due to India’s tendency to think in terms of how to damage Pakistan, rather than what might benefit India.

At the end of the 1971 war, Pakistan was in disarray and the Indian army was in control of the territory of East Pakistan. Had Indira Gandhi annexed it as the new state of East Bengal within the Union of India and offered Sheikh Mujib the chief ministership, evidence suggests he would have accepted. He had few options. India has responded with an iron fist to any secessionist tendencies within the boundaries it was bequeathed by the British, holding large swathes of territory under military occupation, without Constitutional protections. By 1975 Indira Gandhi had annexed Sikkim and broken the ‘Lion of Kashmir’, Sheikh Abdullah, who agreed to be chief minister of Jammu and Kashmir.

The creation of Bangladesh also reinforced the concept of the ‘nation state’, the poisonous gift of European colonisation, rather than stimulating thinking about alternative forms of political organisation. Worse, it reinforced the fallacious notion that nationhood and state formation could be based on a singular identity – ‘Bengali’ in this case, rather than ‘Muslim’, which was the basis for Pakistan. Pakistan ceased to exist in 1971, as the creation of Bangladesh destroyed its raison d’etre. But Bangladesh was no more a land for Bengalis than Pakistan was a homeland for South Asia’s Muslims. Nearly half of the world’s Bengalis did not live in East Pakistan and had no desire to become Bangladeshis, nor did Bangladesh want them. The continuing precarious position of Hindus in Bangladesh showed that being Bengali was not enough.

In 1947 many Bengali Hindus backed Partition to avoid Muslim majority rule in a democratic India. The continuation of Partition in the form of Bangladesh by a professedly secular Indian government has ultimately contributed to the political space for the rise of Hindu nationalism in India.

‘The Pakistani government has never apologised for the genocide it committed’

As we celebrate 50 years since Bangladesh’s independence, I feel proud of my Bangladeshi identity. Yet, when I (with my parents) lived in Karachi in what was then West Pakistan from 1964 to 1970, I observed first-hand how the West Pakistani government deprived the people of East Pakistan (now Bangladesh) of their economic, cultural and political rights. Then from 25 March to 16 December 1971, the Pakistani military government resorted to genocide against Bangladeshis, while many Bangladeshis joined the Liberation War. India offered help to the Bangladeshis by giving them refuge and training their freedom fighters. India finally defeated Pakistan’s forces in early December 1971.

The Bangladeshis have been resilient in nation building and have made advances in many areas. Bangladesh now has a female prime minister, Sheikh Hasina. It has made progress in the field of education and excelled in cricket and the garment industry. The late Sir Fazle Abed founded the world’s largest non government organisation, BRAC, in Bangladesh. Nobel Peace Prize winner Professor Muhammad Yunus’ Grameen Bank’s microcredit system assists the poor, mostly women, to get out of poverty. Bangladesh has also accommodated about 1.3 million Rohingya refugees.

Amid the positive developments, however, there are issues to be addressed. In 1997 a peace accord was signed between the government of Bangladesh and the Chittagong Hill Tracts people. Yet there is still a heavy presence of Bangladeshi military in the Chittagong Hill Tracts and land disputes continue. The 2016 terrorist attacks on the Holey Artisan Café in Dhaka revealed that Bangladesh is vulnerable to the rise of Islamic radicalisation.

Through Bangladesh’s foreign policy of ‘friendship to all, malice to none’, Bangladesh and Pakistan are trying to improve their bilateral relations. But we should never forget the genocide committed by the Pakistani military government against the people of Bangladesh in 1971. As of February 2021, the Pakistani government has not apologised for the genocide. On the war’s 50th anniversary, it is time for it to do so.

The Bangladesh War of Independence has cast a long shadow across all the countries borne out of Partition and each has its own way of viewing that war and its aftermath. In Bangladesh, of course, the 1971 war is a story of liberation from an oppressor. In India, it is seen as a moment of victory. In Pakistan, it is felt as a deep loss; even today, 50 years later, it is not unusual to hear people refer to Bangladesh by its old name, ‘East Pakistan’. Yet despite that sense of loss, refugees from the 1971 war have struggled to find a foothold in Pakistan; instead they are rejected by both sides.

At the time of Partition, many Muslims from the Indian state of Bihar moved to East Pakistan. They were working class but educated and many found work on the railways or in other government jobs. The Biharis spoke Urdu and, over time, tension escalated with the local Bangla-speaking population. When war broke out, the Bihari community sided with West Pakistan. Their side lost the war, meaning that thousands were displaced for a second time. Having already left their homes in India in 1947, many migrated once again. Despite these sacrifices in the name of nation-building, in Pakistan they found a country less than willing to welcome them. Even today, many Biharis do not have full Pakistani citizenship. Thousands more have been left stranded in camps in Bangladesh; until the Supreme Court ruled in 2008 that they had the right to Bangladeshi citizenship, they were rendered stateless. Many of those who did make it to Pakistan still are.

This is echoed on the other side of the border. Millions of ethnic Bengalis sought refuge in the Indian state of Assam, but, 50 years later, they are still considered ‘foreigners’. In recent years, under a Hindu majority government, efforts in Assam to deport or detain some ethnic Bengalis have stepped up.

In both India and Pakistan, these marginalised communities are the ultimate living evidence of the communal tensions that have simmered since 1947 – tensions which have erupted into war several times and which continue to shape people’s lives profoundly.

‘Independence has not necessarily brought freedom or democracy’

Mubashar Hasan, Adjunct Fellow at Western Sydney University and author of Islam and Politics in Bangladesh: The Followers of Ummah (Palgrave Macmillan, 2020).

Though it is 50 years since the country’s creation, the momentum behind the quest for freedom and democracy for Bangladeshis had been building throughout the 1950s and 1960s. Systematic exclusionary policies imposed by West Pakistan had resulted in arrested development in the country’s East, leading to poverty, lower literacy and limited access to civil and military positions for the citizens of East Pakistan.

Added to this, restricted press freedom and the imprisonment and extra-judicial killings of activists and critics funnelled mass resentment. When the Awami League (AL), which was founded by Bengali nationalists in Dhaka in 1949, won 167 of the 169 East Pakistan seats in the 1970 national election, Pakistan’s military ruler Yahya Khan repeatedly postponed the meeting of the national assembly. On 7 March 1971, Bangabandhu Sheikh Mujibur Rahman, the charismatic leader of the AL, said ‘the people of Bangla want to have their rights’. It seemed the issue could not be resolved peacefully and what followed was a nine-month-long war.

In the early years of independence, the Bangladeshi economy was ruined by the war and remained underdeveloped. Yet today, 50 years after the war’s conclusion, progress has been remarkable. The government, with support from NGOs, has lifted millions out of severe poverty, increased mass literacy and reduced child mortality. Its multi-billion-dollar textile industry employs hundreds of thousands of women. Huge infrastructure projects have been completed.

Yet severe economic inequality is on the rise and Bangladeshi democracy is grossly undermined by regular state attacks on freedom of speech, academic freedom and allegations of grave human rights violations against the opposition and critics. Since 2014, the country has, in practice, been under the one-party rule of AL. Citizens, including AL supporters, are denied voting rights. It is a state of affairs, in terms of civil liberties and democracy, that might remind onlookers of the situation which first prompted unrest in East Pakistan. Independence has not necessarily brought real freedom or real democracy.