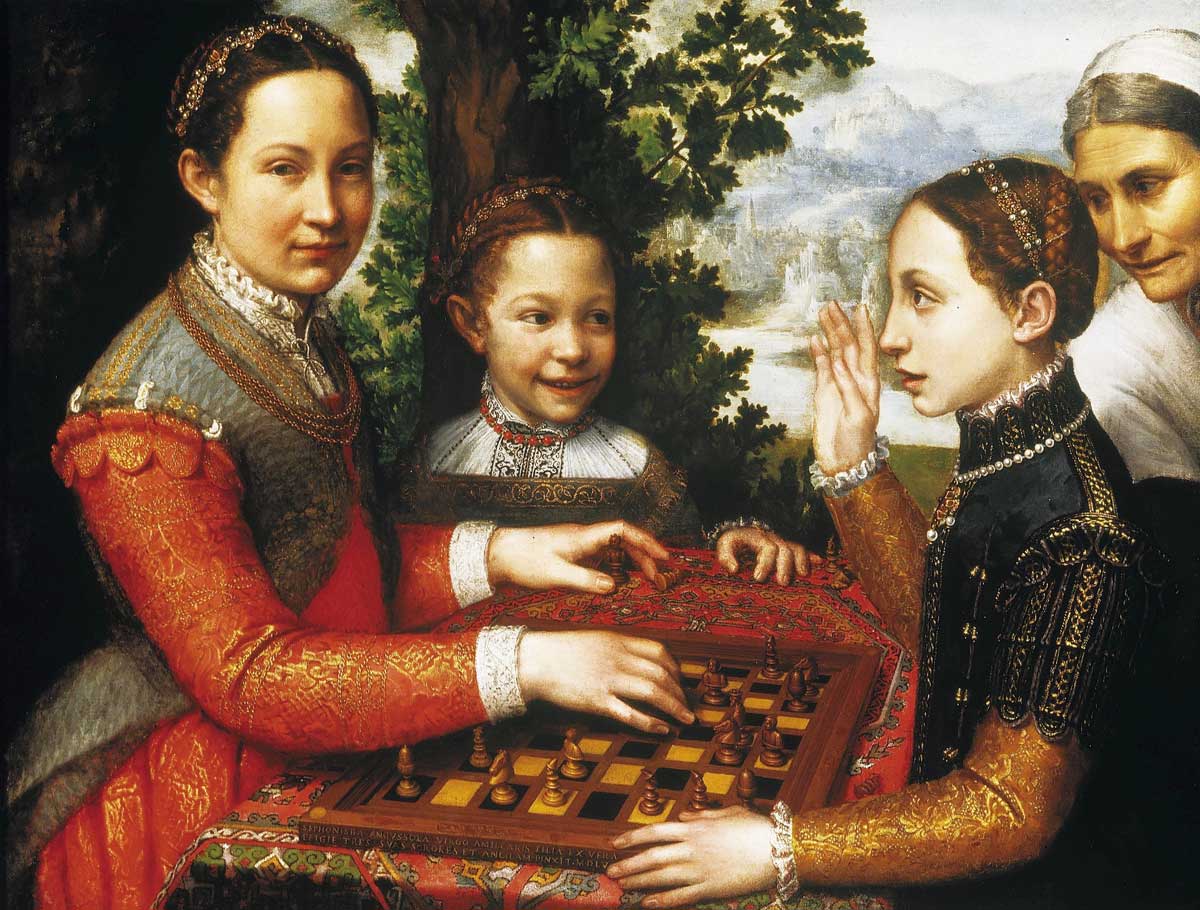 ‘Don’t be born a woman in Florence, if you want your own way’

The Renaissance was a rebirth of interest in classical Greek and Roman culture, submerged in the rise of medieval Christianity. Historians, responding to the magic of names such as da Vinci and Michelangelo, inserted this concept between medieval and modern eras, artificially extending it to social and economic developments.

While Lorenzo de’ Medici fostered the creativity of classicising artists, writers and thinkers, his sister Nannina reflected bitterly, after a fight with her father-in-law: ‘Don’t be born a woman in Florence, if you want your own way.’

Arguably one overarching lesson of history is that the best time to be born a woman will be tomorrow. As always, and everywhere, women’s experience in the Renaissance depended upon the regulation of their sexuality, their economic and political roles, their education and the expectations of their culture.

Elite women in court societies, who could inherit wealth and a measure of power, received classical educations, contributed to literature and became patrons of the arts. In the oppressively patriarchal Republic of Florence, the exclusion of women from public life and spaces, combined with an obsession with protecting the purity of the male bloodline, could make them virtual prisoners in their own houses. Classical culture emphasised human experience and large, eminent lineages like that of the Medici were communities in which women could enjoy influence, thanks to the love and respect of enlightened menfolk. But a French traveller in 1610 marvelled that Florentine women ‘see the world only from the small openings in their windows’. Women were not infrequently injured falling out of windows, perhaps in an effort to extend their horizons.

Working-class women had greater freedom of movement, but suffered as sexual servants, despite the development of increasingly efficient state bureaucracies to regulate health and welfare.

The church remained predominant in shaping the image of women, as either Eve, to blame for the ills of mankind, or the Virgin Mary, untouched by the complex humanity of men.

‘Scholars cannot speak about women as a single category’

‘Renaissance’ labels an era of western European history, variously dated from the 14th to the 16th centuries, which opened a bold, transformative ‘modernity’. Renaissance intellectuals saw themselves launching a brighter age, but they framed it culturally and religiously, not as novelty but as renewal. Rather, we owe to 19th-century scholars our upbeat sense of an innovative historical moment. Jacob Burckhardt’s catchy formulations highlighted discovery and invention of the state, the individual and the arts. As history, however, this Renaissance was deeply incomplete.

In the 1970s, as second-wave feminism reopened the ‘woman question’, Joan Kelly-Gadol posed the question that we re-engage here: did women have a Renaissance? No, she answered, women’s history traced a different course from men’s. Although drawing mostly on literary sources, Kelly Gadol asserted that structural and institutional, as well as ideological, developments during the Renaissance made things not better for women, but worse.

Kelly-Gadol’s intuition was right. Certainly, women, always with notable exceptions, took little part in Burckhardt’s Renaissance. Since the 1970s, however, decades of energetic research have complicated the story of the progress or constriction of women’s lot. One major lesson: just as scholars do not lump all men together, they cannot speak effectively about ‘women’ as a single category. For the highly stratified societies of Renaissance Europe, historians must differentiate by social rank, marital status, family relationships, rural and urban milieus, and religion, race and culture. Much-cited imperatives that all women be ‘chaste, silent, and obedient’ were authorities’ aspirations and far from descriptions of real life. Although women were never the equals of men of their class, variable rules gave them legal responsibilities and agencies. Despite modern feminist rhetoric, most women were neither property nor slaves. In practice, women did crucial work of many kinds on which they and their families depended. Nothing new there, but the Renaissance did deliver the ‘revolution’ of print and expanding literacy that, with time, brought more women spaces for personal, spiritual and creative work.

‘Was there even a “Renaissance”?’

Was there even a ‘Renaissance’? Most academics no longer use the word, but refer to ‘the early modern period’, a term which stresses continuity with modernity. Being old-fashioned, I still like the term ‘Renaissance’, because it places significance on the rediscovery of classical literature – but when did that happen? Joan Kelly-Gadol defined the Renaissance as a cultural phenomenon that occurred in Italy between 1350 and 1530. Fair. But across the rest of Europe something that looked like the Italian Renaissance arrived at wildly differing times. (Nobody can agree when.) What we consider the English Renaissance occurred much later and meant different things for English than for Italian women.

Kelly-Gadol’s essay looks at elite women – she stretches it to include ‘lesser aristocratic women as well as the great’. Before the Renaissance, she writes, ‘courtly love’ traditions had detached sex from marriage and celebrated even adulterous female desire. But it is dangerous to assume that, because a phenomenon was celebrated in literature, it was therefore tolerated by real medieval husbands. Kelly-Gadol cites Eleanor of Aquitaine as a powerful woman who got away with adultery, but it did not stop her second husband imprisoning her, or her first husband taking custody of her daughters.

Meanwhile, the rise in women’s literacy is attested by our knowledge of women who formed letter-writing networks, a newly popular medium for female solidarity. In England, Isabella Whitney became the first women to support herself by selling her own poetry. Meanwhile, bourgeois women in Europe benefited materially from the emergence of capitalism and colonialism. These European women had a Renaissance; the African women on the first transatlantic slave trips did not.

Catherine Fletcher, Author of The Beauty and the Terror: An Alternative History of the Italian Renaissance (Bodley Head, 2020).

Only one woman gets a chapter in Giorgio Vasari’s The Lives of the Artists, the 16th-century text that established a canon of Renaissance art. That is Properzia de’ Rossi, a sculptor from Bologna, into whose section Vasari also crammed the handful of other women he judged worthy of note, including the Florentine nun Plautilla Nelli, whose Last Supper has recently been restored, and Sofonisba Anguissola, who had a successful career as a portraitist at the court of Philip II of Spain. It was hard for women to break into the visual arts: that required an apprenticeship. Those who did often had family connections to the art world.

Literature was different. Numerous Italian women wrote prose and poetry in the 15th and 16th centuries. The best known is Vittoria Colonna, whose prominence is in part due to her friendship with a famous man, Michelangelo. Others included Veronica Gambara, who exchanged poems with Colonna, Laura Cereta, who argued for women’s right to education, and Cassandra Fedele, who gave a formal oration when the queen of Poland visited Venice in 1556. Colonna was a member of an important Roman baronial family, while Gambara was part of the Brescian nobility. Literary endeavours, however, were not restricted to noblewomen. Tullia d’Aragona, who wrote a Dialogue on the Infinity of Love, combined work as a courtesan and writer, as did Veronica Franco. By 1559 a Venetian publisher could issue a collection of poetry featuring works by 53 women. Others played significant roles as patrons, most famously Isabella d’Este, marchioness of Mantua and one of many Renaissance consorts who found themselves running states and households during their husbands’ absences in the Italian Wars of 1494-1559. Wartime upheaval may have been a factor in the flourishing of women’s writing in the 1530s and 1540s, and likewise the lively debates on religion between the beginning of the Protestant Reformation in 1517 and the Council of Trent (1545-63).

While certain aspects of the Italian Renaissance – notably the civic humanism of the Florentine republic – were overwhelmingly male, plenty of women carved out space for themselves in its wider cultural sphere.